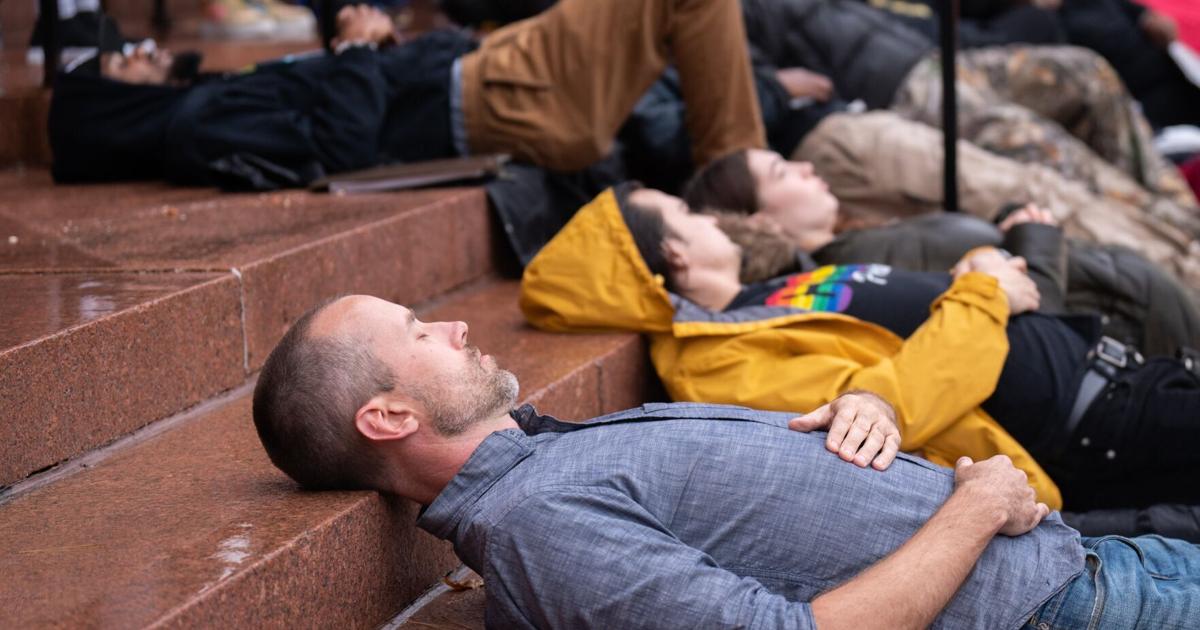 JEFFERSON CITY — Republicans who control state government say they see no need to enact public safety laws that might have taken away the gun used by a school shooter in St. Louis last Monday.

From Gov. Mike Parson at the top of state government down to rank-and-file lawmakers in the House and Senate, red flag laws, also known as “extreme risk” laws, are a non-starter for the GOP, despite support for them in Congress and in other states.

“I doubt very seriously any red flag laws will come through the House,” said West, who is a former police officer. “I think we have enough gun laws in place and we have a lot of other pressing issues.”

Likewise, Rep. Tony Lovasco, R-O’Fallon, said, “I have no interest in that.”

And, Rep. Jeff Knight, R-Lebanon, said, “You’ve got people on such far ends of the gun issue I doubt that there would be any way to come to the middle.”

Red flag laws, which are in place in 19 states, are designed to keep firearms away from people who may pose a threat to themselves or others.

They first began appearing in the late 1990s in Connecticut and gained steam following the high school shooting in Parkland, Florida, in 2018.

Illinois is among states with a firearms restraining order law.

Speak for Safety Illinois, a gun control advocacy group, reported 34 restraining orders were filed in 2019 and another 19 were filed in 2020 in Illinois. The majority of those were filed by police, not families or household members.

The laws enjoy broad support among the public. An NPR-PBS NewsHour-Marist poll taken after the May 24 shooting in Uvalde, Texas, showed that 73% of Americans back the laws, including 60% of Republicans and 61% of gun owners.

But it’s been a no-go in the Missouri House, where lawmakers often cite their membership in the National Rifle Association in their official biographies.

Earlier this year, 47 Republican state lawmakers signed a letter urging retiring U.S. Sen. Roy Blunt of Missouri to back out of a bipartisan plan to tackle gun violence, saying so-called “red flag” incentives included in the framework were unacceptable.

The letter focused criticism on grants that would be made available for states to adopt red flag laws. In the letter, the Missouri lawmakers said such laws allow the government to confiscate weapons from people who haven’t been convicted of a crime.

“If this measure comes to fruition, a vote for it will directly enable the spread of confiscation laws throughout the country, and further normalize support for the eventual disarmament of this nation,” the lawmakers wrote.

In the case of Monday’s shooting, St. Louis police said the gunman who forced his way into Central Visual and Performing Arts High School and the Collegiate School of Medicine and Bioscience and killed two people, used a rifle that had been taken away from him earlier this month.

Police said the mother of 19-year-old Orlando Harris, who police killed after he barricaded himself in a third floor room, called police in mid-October in hopes of getting a gun removed from Harris’ possession.

Police, however, “determined at that time the suspect was lawfully permitted to possess the firearm,” which he had purchased from a private seller after he failed to pass a federal background check.

Desire to do something

While they oppose red flag laws, Republicans, who currently hold supermajorities in both the House and Senate, say they are open to other approaches to address gun violence.

West, who is a member of the House Crime Prevention Committee, said he wants to see prosecutors use current firearms laws to crack down on people who don’t use guns responsibly.

“There is an appetite to be doing something,” Lovasco said.

“Bad people doing bad things are going to find ways to do those things,” Parson said in an interview Tuesday with KTVI (Channel 2). “You can make all the guns illegal that you want, but the bottom line is someone is going to go get one, and they’re not law-abiding citizens anyhow.”

On Thursday, Parson met in downtown St. Louis with the officers who responded to Monday’s shooting. He praised the officers, then after the meeting argued again that red flag laws would not have stopped the shooting.

“You got a criminal that committed a criminal act, and all the laws in the world are not going to stop those things,” Parson said.

Despite ongoing Republican opposition, Democrats in the Legislature continue to introduce bills that could remove firearms from people deemed dangerous.

In 2019, for example, former Sen. Jamilah Nasheed, D-St. Louis, sponsored legislation that would temporarily remove guns from an individual who is believed to pose a threat to themselves or others.

“As I have said before, gun violence is an epidemic in this country. If we can help reduce it through commonsense solutions, I believe we should,” Nasheed said at the time.

The proposed legislation, which did not advance, would have allowed a law enforcement officer, family or household member of someone who is believed to pose a danger to themselves or to another individual by use of a firearm to file a petition with the court for a firearms restraining order. If approved by the court, this restraining order prohibits the individual from purchasing, possessing, receiving or having in their custody any firearms for a period of time.

Similar bills have been filed in the ensuing years, including one from Sen. Doug Beck, D-Affton, who wanted to prohibit individuals from possessing a firearm due to domestic violence protection orders.

On Friday, he vowed to try again in January when the Legislature returns to action.

“Right now, Missouri is wrestling with a gut-wrenching, but simple truth: If Missouri had a Red Flag Law, a child and a teacher would still be alive,” Beck said. “The need for a Red Flag Law in Missouri has never been clearer. I am calling on legislators who previously opposed this legislation to search their hearts and change their minds before any more children are killed in our state.”

Shake off your afternoon slump with the oft-shared and offbeat news of the day, hand-brewed by our online news editors.

On this day in history, Nov. 21, 1864, Abraham Lincoln ‘pens’ letter to Mrs. Bixby
Solo Overnight Building a Tree Fort with Fireplace in The Snow and Ribeye Cooked Over a Chimney
Skills chalenge: 1stick fire method with axe Pt. 1
Crossing Ontario’s Oldest Park- A Paddle and Portage Adventure!
How to Use a Button Compass: Navigation 101