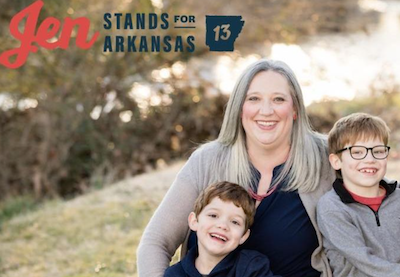 Hard as some have tried to inject a note of moderation into Northwest Arkansas elections, most have come up failures.

So why not take it straight to the lying liars of the NRA and its wholly-owned subsidiary, the Arkansas Republican Party?

Jen Standerfer, a Bentonville lawyer and former prosecutor in Pulaski County, isn’t taking the lies of Republican opponent Scott Richardson and the NRA lying down. Read this bracing Twitter thread. Soft on guns, you say? Read on.

This is a lie. You know why I support gun rights? Because I was a Gang Unit Prosecutor walking alone to my car in the middle of the night in downtown Little Rock after securing life sentences for murderers. That’s when I got my concealed carry permit. #arpx #arleg 1/4 pic.twitter.com/9OjoxsuJnc

It’s a district without an incumbent, drawn to be as pro-R as possible. Pro-truth voters should mark ballots for Standerfer.