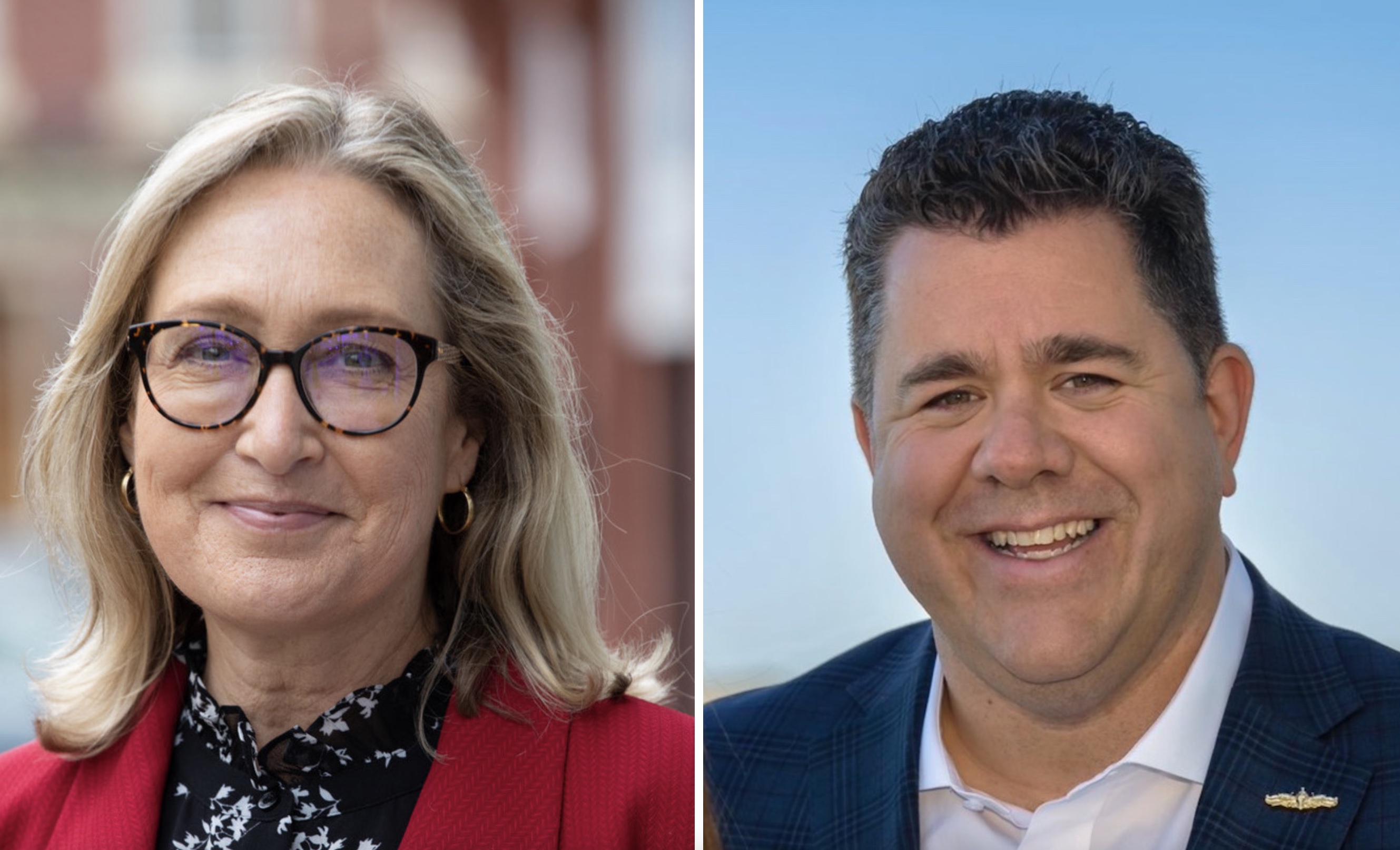 Suffolk County Legislator Bridget Fleming and Nick LaLota, vying to succeed Representative Lee Zeldin in New York’s First Congressional District, clashed over the economy, abortion, gun policy, and crime in a debate at Newsday’s studio in Melville on Oct. 19. They also disagreed about aiding Ukraine, which included a gaffe by Mr. LaLota that Ms. Fleming seized on.

Each candidate attempted to define the other throughout the 40-minute debate, both claiming that their opponent would be beholden to their party’s House of Representatives leadership. With Democrats holding a slim majority there but facing headwinds, the outcome of the First District race will help determine control of the House for the second half of President Biden’s term.

Two-thirds of Long Islanders live paycheck to paycheck, said Mr. LaLota, the Republican and Conservative Party candidate, who is chief of staff to the Republican presiding officer of the Suffolk Legislature, “and since President Biden took office interest rates have doubled, gasoline is up 62 percent, and the stock market and investments that are attached to it are down 15 percent. This current round of inflation has been caused, honestly, by both parties overspending for 20 years, but in New York State it’s because of the politicians who have been raising our taxes for too long,” and he included Ms. Fleming among them. “The start to lower prices . . . is governments paring back both locally and nationally.” He would do that in Congress, he said.

“We’re coming out of a time that has been unlike any other,” said Ms. Fleming, the Democratic and Working Families Party candidate and a former member of the Southampton Town Board, “a global pandemic that shut down the economy. . . . What that brought to the surface was real inequities in our communities,” particularly regarding housing and food insecurity.

Mr. LaLota said that, if elected, a priority would be to “put a bill on the president’s desk that stands for the premise of American energy independence. As a country we’re sitting on 43.8 billion barrels of proven oil reserves,” he said, citing natural gas deposits in New York’s Southern Tier that “could be extracted safely. . . . If we have more access to our own energy, we don’t have to beg our adversaries overseas for it, and we can ensure that we bring our prices down.”

New York leads the country in out-of-state migration, he said. “It’s because the politicians, both locally and in Albany, keep raising our property and income taxes.” As a member of the Amityville Village Board, “I cut my own pay by 20 percent. I cut discretionary spending by 25 percent. . . . We provided bona fide tax relief to people.”

Ms. Fleming countered that “when you compare the two records, you really see who is the better steward of your tax dollars.” Referring to a 2015 spending proposal that Mr. LaLota, as Amityville’s budget officer, said would save money by abolishing its police department or by seeking concessions from the police union, she charged that her opponent “suggested balancing the budget on the backs of rank-and-file police officers.”

Of the United States Supreme Court’s June ruling that the Constitution does not confer the right to abortion, overturning almost 50 years of legal precedent, Mr. LaLota said he does not oppose abortion “when it comes to rape, incest, or the life of the mother,” nor in the first trimester. “I do oppose abortion in the second and third trimesters. I would insist that government funds not be used for abortions, and I would insist that parents get notified before their minor child contemplates an abortion.”

Ms. Fleming, a former sex crimes prosecutor, said that her opponent has changed his position. “What his personal view is, at the moment, is far less important than what his political position is. And his political position basically abandons women and gives up on 50 years of fundamental freedoms that women have counted on. . . . Any one-size-fits-all regulation that Mr. LaLota wants to let any other politician impose has no basis in medical care. It is impossible to do a one-size-fits-all ban that will take into account the complex circumstances of each individual pregnancy. And to threaten doctors with criminal prosecution, should they make a mistake in that circumstance, endangers women’s lives.”

She said that Kevin McCarthy, the House minority leader, called the Supreme Court’s ruling “the most important pro-life case in the history of America. This is the person that Mr. LaLota is going to elect speaker if he gets to Congress.” Mr. LaLota acknowledged that he would vote to make Mr. McCarthy the speaker of the House.

Mr. LaLota called for “new solutions” with respect to guns and the country’s epidemic of mass shootings, many occurring at schools. “When the school board wants it, the federal government should invest resources to ensure that there’s a security presence at each of these schools, that local departments have the resources to respond to issues when they’re there, that they can have the training, the tactics, the procedures, the equipment, the staffing in order to do that.”

Citing mental health, he also said that “we should be able to analyze who it is that has the propensity to do these things, and through due process bring them before a neutral court, magistrate, a judge, or a jury and ensure that at that point in time, their access to weapons gets taken away.”

“Yes, we need increased mental health investment,” Ms. Fleming said. “Yes, we need red flag laws that will keep guns out of the hands of those who are dangerous.” But many common-sense and popular solutions to gun violence already exist, she said, yet Republicans will not support them “because they’re in the grips of the [National Rifle Association]. Special interests have controlled this debate for far too long.” A ban on assault-style firearms has popular support, she said. “Weapons of war don’t belong on our streets.”

Regarding crime, Ms. Fleming said, “I am the candidate in this race who is endorsed by active police. I worked on the Southampton Town Board as a police commissioner.” She is supported by the Police Benevolent Associations of Southampton Town and Suffolk County and the Police Conference of New York, comprising 18 organizations “including the Amityville P.B.A., by the way, which is where Mr. LaLota went after them to balance his budget on their backs, and actually tried to dismantle the police department altogether.”

“The union endorses you if you vote for their contract,” Mr. LaLota shot back. “It’s a quid pro quo, it happens every year.” The real issue, he said, “is bail reform, passed by Albany Democrats” with no Republican support. “It put the bad guys in charge in this state.” Ms. Fleming, he said, “called the riots of 2020 justified.”

“What a cynical way of looking at government we’ve heard over and over again from Mr. LaLota,” Ms. Fleming answered. “To think that Mr. LaLota thinks the rank-and-file police officers only support you if you support their contracts is so deeply cynical. . . . And now to say that an entire generation that’s entering the work force with crushing academic debt shouldn’t get some consideration by government is deeply cynical.” She acknowledged, though, that she considers the plan imperfect.

Asked if President Biden won the 2020 election, Mr. LaLota did not directly answer, and drew some hissing from the audience when he said, “I know that Joe Biden’s president, you know that Joe Biden is president, but on a given day, I don’t think that Joe Biden quite understands that he’s the president of the United States.” He said that he had condemned the insurrection at the United States Capitol on Jan. 6, 2021, but drew some derisive laughter when he said, “We’re the party of law and order.”

“It’s absolutely tragic,” Ms. Fleming said, that Mr. McCarthy “will punish” Republican officials “who hold accountable the folks who rioted and led to the death of police officers, led to the death of other citizens, and . . . tried to overturn government in a way that was so brutal and so unlawful.”

In the only question about foreign policy, Mr. LaLota said that, while the United States has a duty as the world’s sole superpower, “our funds in Ukraine are costing tens of billions. What doesn’t cost much is stronger diplomacy out of the White House.” Mr. Biden, he said, should ensure that European countries are “pitching in financially to ensure that the Ukrainian people can help defend themselves. It can’t be America alone that does this. We should create a multinational contingent to do it.”

Dozens of European countries, and dozens more around the world, have provided military, financial, and humanitarian aid to Ukraine since Russia’s invasion in February.

Ms. Fleming pounced on the statement. “I am curious to hear Mr. LaLota say that there should be an international coalition working against Vladimir Putin in Ukraine,” she answered. “There is, it’s called NATO. And NATO is actually, interestingly, unified. The 30 countries in NATO were unified in a unique way by the president of the United States prior to the invasion.” The North Atlantic Treaty Organization, she said, “is certainly an international coalition that our country worked to get moving in one direction.”