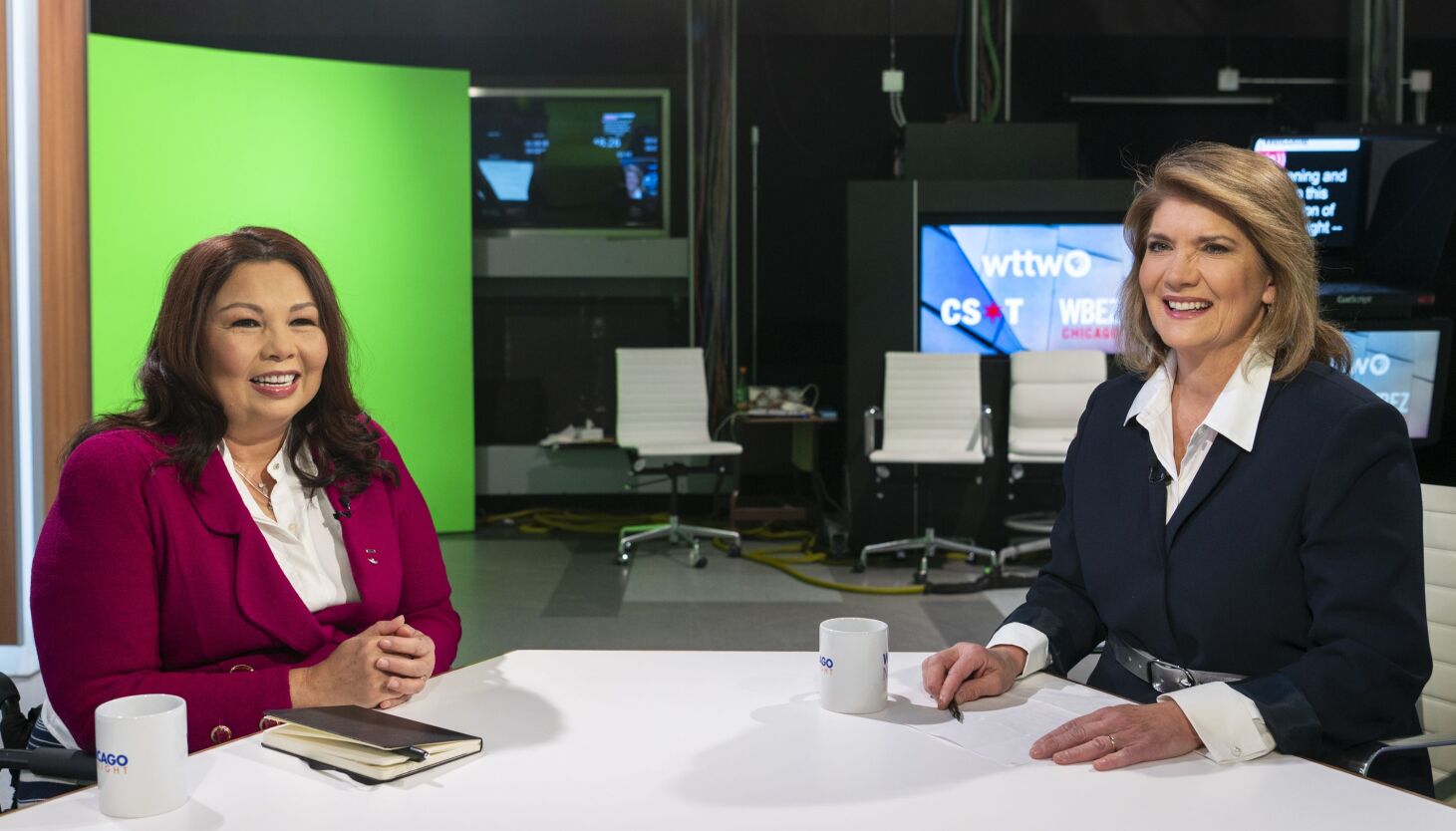 Democratic U.S. Sen. Tammy Duckworth and her Republican challenger Kathy Salvi couldn’t be further apart on gun control, abortion rights, inflation, or just about any other key issue facing residents in Illinois and beyond.

But they did find one rare patch of common ground during a televised forum Thursday night, as both Senate candidates agreed the Chicago Bears should ditch Soldier Field in favor of greener pastures in Arlington Heights.

“I do think they should go to Arlington Heights with a new stadium, because more people will get to it, and I think there’s a greater chance of having greater growth out there,” Duckworth said when tossed that political football during the forum sponsored by the Chicago Sun-Times, WBEZ and WTTW.

A move to the Democrat’s former congressional district is far from a done deal, but the incumbent from Hoffman Estates said if any public money is involved, it should come with “tremendous strings so that the taxpayers are compensated for any type of subsidies that they [the Bears] are provided with.”

Salvi, the Mundelein attorney vying to prevent a second Duckworth term, quickly took the handoff, saying: “I’d love to see the Chicago Bears in the Arlington Heights area, too, but don’t you love Soldier Field? It’s an iconic place, a lot of history. But if they want to move to Arlington Heights, let’s keep the Bears here in Illinois, that’s for sure.”

That was about the extent of the candidates’ time in sync during an hourlong question-and-answer session that saw Salvi consistently circling back to attack Duckworth as a “radical extremist” on abortion rights and a “rubber stamp” vote for President Joe Biden’s policies that the challenger claims are fueling inflation.

Duckworth, 54, stood by her record in Washington, pointing to legislation she helped pass to stiffen punishment for straw purchasers, or people who illegally buy guns for people who aren’t allowed to have them.

“The voters sent me to Washington to find those common-sense solutions,” Duckworth said.

With the nation’s ongoing gun violence epidemic, the sitting senator said “we need to pass an assault weapons ban and a high-capacity magazine ban that will get those guns off the streets.”

Duckworth went after Salvi for her “A” rating from the National Rifle Association.

“She’s never going to vote for an assault weapons ban,” Duckworth said of Salvi, who said the emphasis should be on treating mental illness rather than restricting firearms.

Asked if they own guns, both candidates said no. Salvi said some of her adult children own firearms with concealed carry licenses, for “target practice and for protection.”

Salvi tried to tie Duckworth the rising Chicago crime through her “reckless” support of Chicago Mayor Lori Lightfoot, and she also went after the senator for supporting COVID-19 regulations that shut down schools early in the pandemic — a decision made by Gov. J.B. Pritzker.

Duckworth repeatedly suggested Salvi was confused about what was covered by federal, state or local laws.

“I think she’s running for mayor of Chicago in the municipal elections next year, not for Senate,” Duckworth cracked. “We’re here to talk about November.”

The senator said she’d vote to codify abortion rights into federal law “consistent with Illinois law, which is at the 24 weeks at the point of viability.

“My daughters, I’m not gonna let them grow up in a world where they have fewer rights than I do,” Duckworth said. “We’ve had Roe v Wade now for 50 years, [rights] which have now just been ripped away, and frankly Kathy Salvi and Republicans are pushing for a nationwide abortion ban.”

“I support exceptions and regulation of big-business abortion,” she said, noting she supports abortion rights in cases of rape, incest or those that risk the life of the mother.

Without any knockout moments in the forum, Salvi continues to face an uphill battle in her bid to unseat Duckworth, who was shortlisted as a potential running mate for Biden in 2020.

Duckworth outpaces Salvi in terms of both name recognition and fundraising. The senator entered the home stretch of the election with more than $7.6 million in her campaign fund, compared to about $204,000 for Salvi, whose bid is largely self-financed.

Duckworth served two terms in a suburban U.S. House seat before she beat GOP former Sen. Mark Kirk in 2016 to become Illinois’ second-ever woman senator and the first double amputee ever elected to the U.S. Senate. The Army National Guard veteran lost her legs during a tour of duty in Iraq in 2004.

Salvi’s only previous political foray ended in a second-place finish in a 2006 GOP primary for a suburban congressional seat.

A Chicago Sun-Times/WBEZ poll earlier this month had Duckworth leading Salvi about 50% to 36%, with 5% of respondents supporting Bill Redpath, a financial consultant from West Dundee who is the Libertarian candidate on the ballot. About 9% of likely voters in the survey were undecided.

That same poll suggests it’s unclear whether the candidates’ support for a new suburban Bears stadium will help or hurt them with voters. About 31% of those surveyed said they think the Bears should move to Arlington Heights, compared to 29% who said they think the team should stay put. About 39% weren’t sure.

A Country Ravaged: Mass Shootings Plague the U.S.
The NRA Used to Donate to Democrats’ Campaigns, Too. Why Did It Stop?
Community Voices: The fewer the ARs out there, the fewer who will die
Historic! PT Usha set to get elected as IOA chief
Americans Are Disgusted by Republican Inaction on Mass Shootings