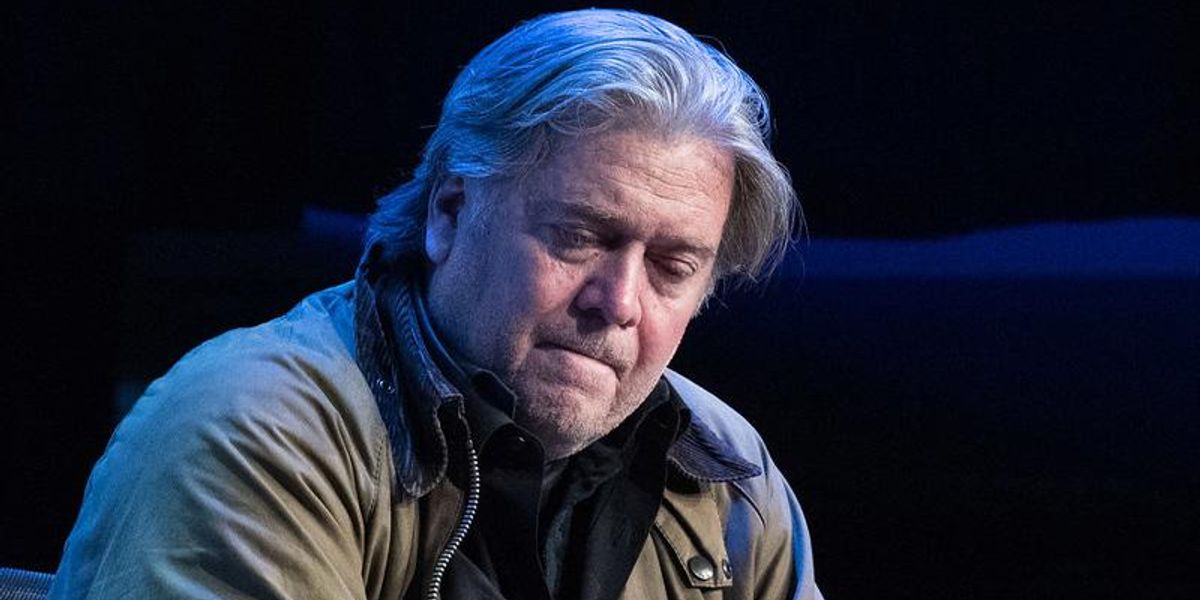 White nationalist and twice-convicted felon Steve Bannon told Kash Patel – who served as chief of staff to the acting secretary of defense under former President Donald Trump – that Republicans are going to go after Democrats “with a bayonet” if the GOP wins majorities in the United States House of Representatives and the Senate in the November midterm elections.

“What word of advice would you give to leadership in the House in the next two weeks and then after they take power?” Bannon asked Patel on Wednesday’s edition of War Room: Pandemic. Patel proceeded to reference COVID-19 conspiracy theories and threaten Democratic Capitol Hill lawmakers.

“It’s simple. I said, I have no problem going around the country campaigning for you because you care about America First values. And you better not forget the things that you campaigned on: accountability, destroying the two-tiered system of justice, and ending the politicization of law enforcement in our military. Gone are the days where you force individuals who are brave enough to serve this country to choose between faith and a fake China virus jab. These things have to be front and center. Reinstating those law enforcement military personnel that were removed from their positions because they chose faith over a jab that wasn’t fully tested,” Patel replied, noting that Representatives Adam Schiff (D-California), Eric Swalwell (D-California), and Alexandria Ocasio-Cortez (D-New York) are among the lawmakers that the right-wing would like to get rid of.

“But what I’m going to remind these people of that we’re sending to Washington — the [Nevada GOP Senate candidates][Adam] Laxalts [Nevada], the Blakes [Masters of Arizona], the JDs [Vance of Ohio] and everybody else — is that you guys, on these committees, with the majority, have to come in and subpoena everybody and every record and put them out for the American people, not keep them to yourselves. Two: you got to kick all these people off the committees like they did to us,” Patel continued. “Watermelon head Schiff, Swalwell and company, AOC, and the whole squad have no business touching the American Constitution because they have lit it on fire for the last five years. And they will not be permitted to have leadership positions of any kind.”

Patel also said that Republicans “will conduct a full-scale overhaul of the intelligence and law enforcement communities, whether it’s with – through a Church-like commission or otherwise. Every member of Congress and every senator needs it be known that when they’re sworn in on January 1st, they were sent there for these reasons. This is why the American public sent you there. And if they forget, I’m going to come on your show and remind them, by name.”

But Bannon thought that harsher measures are necessary. “No, we’re going to do it by bayonet,” he stated. “By the way, MSNBC, you want something to complain about, about Kash Patel? Just – we’ll cut this segment. You just listen to what he just said ’cause that’s gonna be reality.”

The Disturbing World of the New GOP
Evolution of the APO 1S – Design, Pricing, Taxes
The NRA Used to Donate to Democrats’ Campaigns, Too. Why Did It Stop?
P.T. Usha Set to Become First Woman President of Indian Olympic Association
Mini Uzi .45 ACP Close-up