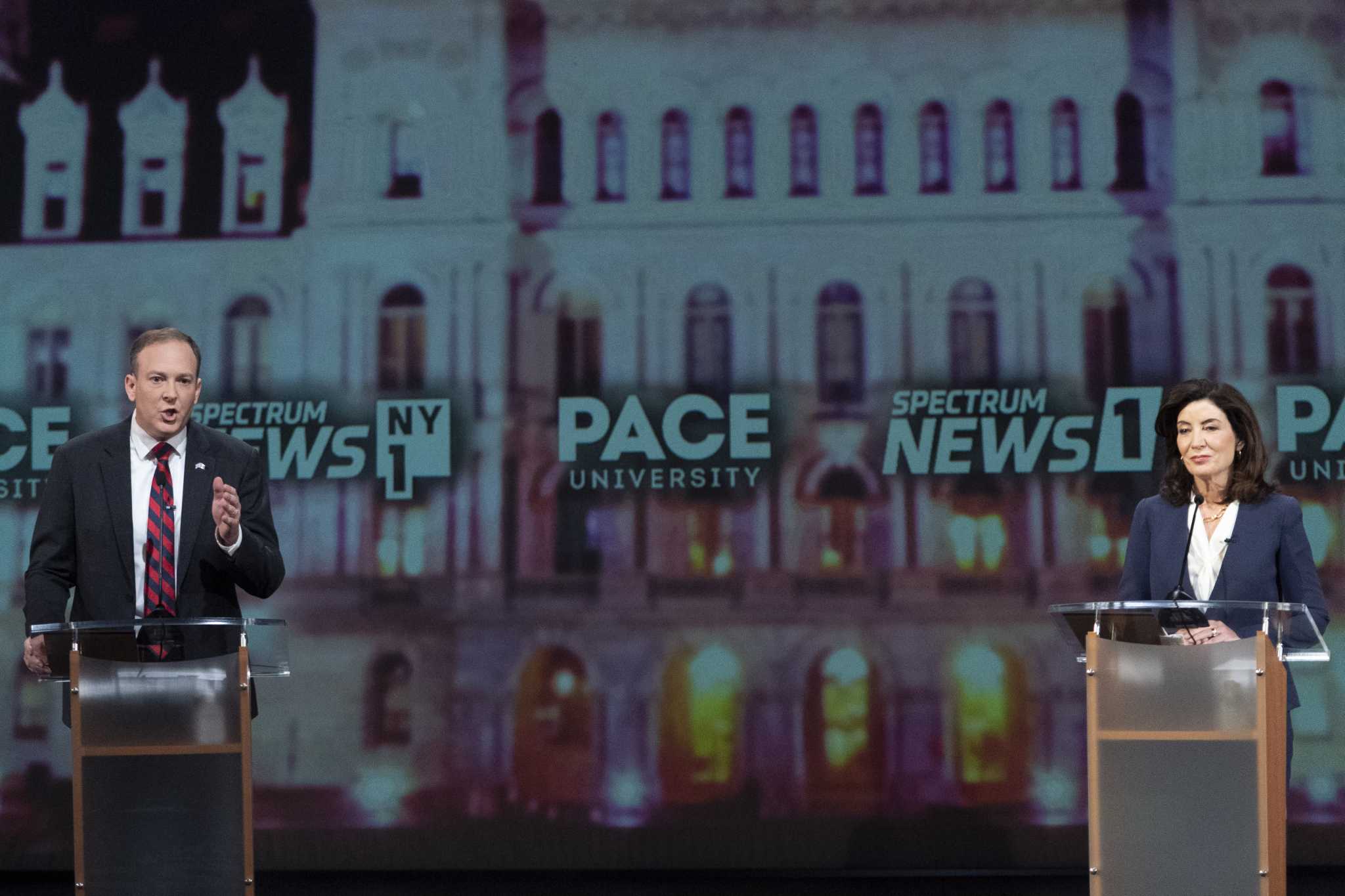 ALBANY — Tuesday’s gubernatorial debate reminded me of the joke Woody Allen tells at the start of “Annie Hall.” It goes like this: Two women are at a Catskill mountain resort and one says, “Boy, the food at this place is really terrible.” And the other one says, “Yeah, I know, and such small portions.”

That’s essentially how I felt while watching Republican Lee Zeldin face off against Gov. Kathy Hochul, a Democrat. The gubernatorial debate was largely unedifying, unpleasant and added little to a race that is tighter than many of us expected. And the voters of New York deserve more of it.

It is shameful that, barring a last-minute change, there will be only one debate. It’s even worse that the lone debate aired on Spectrum, a cable-television network.

A reminder: Millions of New York households have either cut the cord or can’t afford cable, and even if they do subscribe to a cable or satellite service, Spectrum might not be their provider. And while, yes, Spectrum did stream the debate on its website, millions of New Yorkers either don’t have broadband access or would have found that an irksome place to watch.

The result presumably was a relatively small audience, which is likely what Hochul wanted. By agreeing only to a singular debate aired on cable, the governor employed the cynical, play-it-cautious strategy typical of incumbents who are ahead in the polls. It was all about limiting risk.

Why expose voters to your challenger while chancing a campaign-altering gaffe? It’s safer to let campaign commercials do the talking.

Hochul’s tactic probably paid off, in that she seemingly exited the debate unscathed. If there was a moment that will stick in the minds of voters and forever change the election, well, I must have missed it.

As one political observer put it: “All in all, they both acquitted themselves well. Good punches landed by both. No knockdowns. After 12 rounds, it was a draw.”

Even if you missed the entire debate, perhaps because you don’t pay exorbitant sums for cable, you can probably guess its themes and contours.

Zeldin, talking rapidly and almost glaring into the camera, was eager to talk about rising crime and was quick, despite scant evidence, to blame violence on bail reform and other changes. He even declared that, as governor, he would enact a state of emergency on crime to unilaterally (and undemocratically) end “cashless bail” and “other pro-criminal laws.”

Hochul has at last realized that fear of crime is a leading issue in the race and a likely reason for tightening polls, causing her campaign to embrace, as Politico called it, “a last-minute shift in approach.” But her answers on the topic weren’t especially convincing.

“I understand the fear,” she said. “I walk the streets of New York City every day. I have taken the subways.”

With all due respect, governor, braving the streets or trains with the entourage that surrounds a wealthy and privileged elected official does not help you understand the fear felt by regular New Yorkers, and you only risk irritating them by suggesting that it somehow does.

When she wasn’t talking about her supposedly scary forays, Hochul was attempting to tie rising crime to Zeldin’s congressional votes against federal gun control. Of course Hochul was endorsed and backed by the National Rifle Association as a member of Congress, suggesting she wasn’t always so tough on guns.

Hochul was happier to talk about protecting abortion access and Zeldin’s ties to former President Donald Trump. Smiling and projecting a cheerful calm, she repeatedly (and justifiably) called Zeldin an “election denier” and suggested her opponent was a threat to democracy.

Even so late into the campaign, Zeldin lacks a reasonable answer for his Jan. 6 votes against certifying presidential election results from Pennsylvania and Arizona, likely because there isn’t one. The Republican did offer, to Hochul’s apparent glee, an impassioned defense of Trump’s record before declining to say if he wants the former president to run again.

“Not even thinking about it,” he said. (Hochul said Joe Biden should seek re-election.)

Again, none of this was surprising, satisfying or edifying. Anyone who has paid even scant attention to the race could have predicted much of what the candidates said.

That doesn’t mean the debate was worthless. It’s good for voters to see candidates thinking on their feet and responding to questions. It’s good when they’re challenged on their canned lines and questionable assertions. It helps to see the human beings smeared by the attack ads.

And there were real and substantive differences on display, such as when disagreement on the state’s $600 million contribution toward a new Buffalo Bills stadium led Hochul and Zeldin into a broader debate about direct government spending on economic development.

This race needs more moments like that. Give us bigger portions.