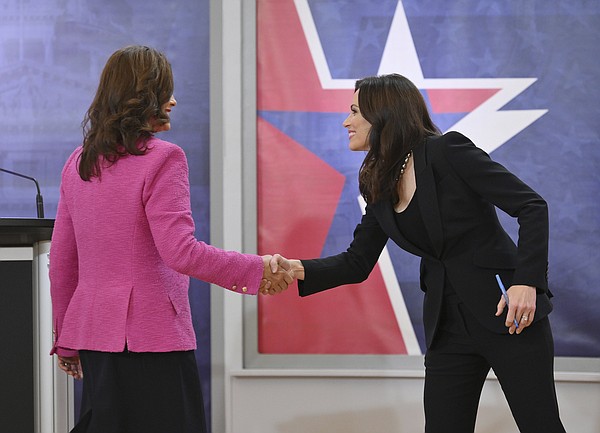 Dixon, a former businesswoman and conservative commentator endorsed by former President Donald Trump, is hoping a late surge of support will help her unseat the first-term incumbent Democrat, who has had a multimillion-dollar fundraising advantage.

Whitmer and fellow Democrats spent months pummeling Dixon with ads before the Republican and her supporters — including the family of former Education Secretary Betsy DeVos — responded.

Tuesday’s debate was the final meeting before the November election.

“We always knew that this would be a close race,” Whitmer told reporters after the debate. “This is a great state but it’s a divided state at times. I take no person, no vote, or no community for granted.”

With persistent inflation and high prices one of the top issues on voters’ minds, Dixon said Whitmer “has not done anything to help.” She criticized Whitmer for vetoing a GOP measure earlier this year to freeze the state’s 27-cents-per-gallon gas tax and said a recession is “at our doorstep.”

But Whitmer called the measure the Republican-led Legislature approved “a gimmick.” The legislation would have frozen the tax for six months effective in 2023 — a delay Whitmer said wouldn’t provide immediate help to people who needed it.

Whitmer said her administration was able to help people in Michigan by providing help such as free or low-cost child care.

Whitmer questioned how Dixon — who supports repealing the state’s income tax — would balance the state budget and ensure sufficient funding for areas like education without the roughly $12 billion the state receives from income taxes.

Dixon countered that she would eliminate the tax over time, suggesting it could be done over eight to 10 years.

Whitmer delivered one of her sharpest lines of the night regarding school safety. The debate at Oakland University was held about 15 miles from Oxford High School, where a 16-year-old student fatally shot four students last year.

During one of several exchanges about education, Dixon was critical of Whitmer’s administration for allowing books in school libraries that she says are inappropriate because they reference sex and gender. Whitmer called it a distraction at a time when deadly school shootings occur with regularity.

“Do you really think books are more dangerous than guns?” Whitmer asked. She called for stricter gun laws, including background checks and secure gun storage.

Dixon, endorsed by the National Rifle Association, said during the debate that she supports having armed guards at schools and single-entry buildings. She pointed to a report on how to better secure schools and said if it had been implemented at Oxford “we might have saved lives.”

“Ask yourself: Who’s going to keep your kids safe? A former prosecutor with plans or a candidate with thoughts and prayers?”

A proposal on the state’s November ballot will let voters decide whether to enshrine the right to abortion in the state constitution.

Before the U.S. Supreme Court overturning Roe v. Wade in June, Whitmer filed a lawsuit to stop a 1931 abortion ban from taking effect in Michigan.

The two candidates disagreed on what the constitutional amendment would allow.

Dixon, who opposes abortion except to save the life of the mother, claimed the proposal would allow abortion “up to the moment of birth for any reason.” But Dixon said voters could vote how they wanted on the proposal — while also voting for her.

Whitmer said the proposal would return abortion rights that had been in place for 49 years before the U.S. Supreme Court overturned Roe vs. Wade.

Asked by moderators to say something nice about their opponents, each focused on the other’s role as a mother. Dixon has four school-age daughters, while Whitmer has two college-age daughters and three stepsons.

Dixon praised Whitmer’s emphasis on her daughters and her fight for women. Whitmer said of Dixon that she appreciates “how hard it is to run for office and raise kids.”

The race between Dixon and Whitmer is the first time two women have faced off for Michigan governor. Nationally, there are five woman-vs.-woman races this fall.