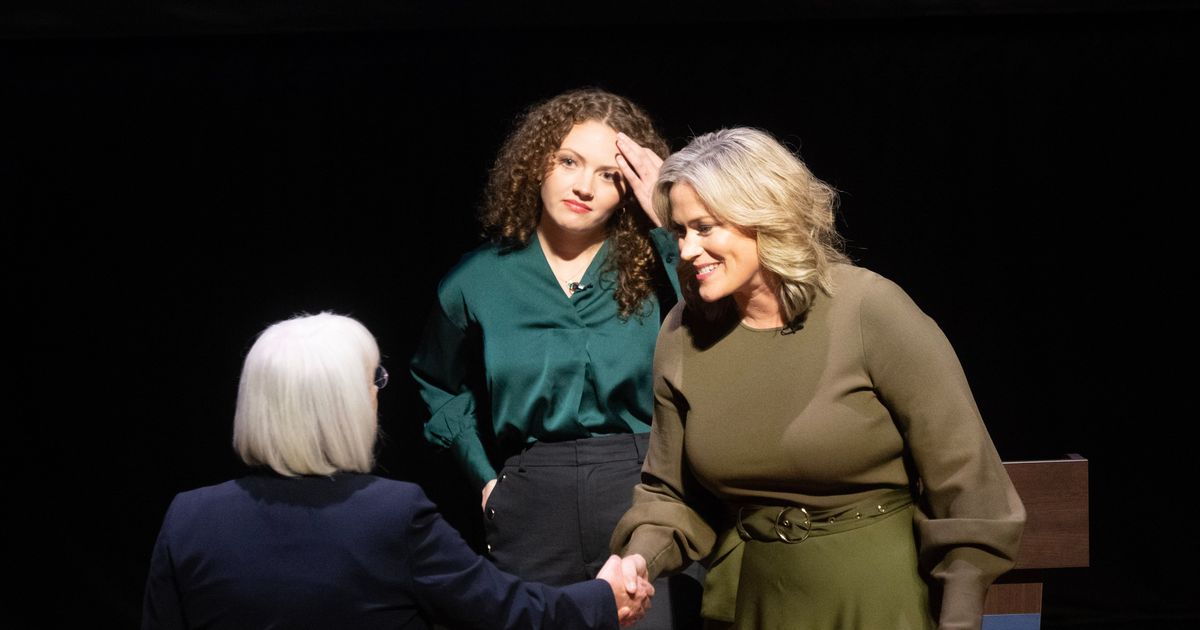 Patty Murray and Tiffany Smiley tackled 20 questions during a debate on Gonzaga University’s campus Sunday evening. Here are a few key moments of the debate in the candidates’ own words. They’ve been lightly edited for clarity.

In recent months, the Jan. 6 committee made a case with testimony of many Republicans, Trump aides and administration officials that former President Trump was personally responsible for the Jan. 6 riot. How do you feel about the findings of the committee, and how much responsibility do you attribute to Trump?

Murray: I was in the Capitol on Jan. 6. I was stuck in my office, I didn’t get to run out of the Senate like Josh Hawley did. I was locked in a room with insurrectionists pounding on my door. I heard what they said. I heard what their goal was. It was to take over a peaceful transfer of power using brute force.

I will not ever forget that day. I walked away from a terrifically horrible situation and realized for the first time in my life that our democracy doesn’t happen just because you think it’s there. Our democracy is something you have to fight for. We can never allow brute force to take over our votes, or our voices.

I will fight every day to make sure that we never allow those people who continue the big lie, including my opponent on her website – of course, she changed it in July – to question that election, because that sows mistrust in our country for democracy. It is critical that we hold everyone accountable, and never allow our democracy to be taken away. We have to fight for it.

I want to fight for and I want our country to know that this is a critical issue in this election.

Smiley: I don’t know who gave you that talking point, Sen. Murray, but I have my agenda for political recovery and reform, to turn crisis into hope, and I address this issue because our elections are important to people all over this country. In fact, you objected to the 2004 presidential election as well. So, I think this is on both sides of the aisle.

And to be clear, and to the point we watched Jan. 6. And I had to describe to my husband, who lost his eyesight in service to our country, what was unfolding. It was heartbreaking for us. And those who broke the law should be held to the full extent of, our judicial system and our law.

And so I want to ask, you know, do you believe that me and my family are a threat to democracy, Sen. Murray? Because tell everyone here today. Either that or disavow your campaign’s dangerous rhetoric that has spent millions of dollars to attack and paint me as someone I am not. That’s what’s on the ballot this November. I am here to unify, to bring us together to serve this country. This is not about politics. This is about the United States.

Would you support further steps at the federal level such as reinstating and assault weapons ban, restricting magazine capacity or ghost guns?

Murray: The answer to that is absolutely yes. No one should have to worry about walking in their neighborhood, or sending their kids to a school, or going to a movie theater or the mall, about gun violence.

Finally, last year, I got money for the CDC to do research on what is causing gun violence, and when we have that research, we will better know what steps we can take at the federal level to reduce the issue of gun violence. I will fight every day to make sure that your kids don’t have to worry about somebody coming into their schools, that you can walk through the streets safely, that we as a country stand up to the NRA, and fight back and make sure that we put public safety first.

Smiley: Yes, we have a crime issue. We need to ensure that we protect our Second Amendment rights for law-abiding citizens, and that we keep weapons out of the hands of criminals.

Again, crime is out of control. Senator Murray, you are to blame. … Thirty years in the Senate, and this is where we are. And it’s not just guns, Senator Murray, there’s families who are worried about people on the streets swinging bats. Students at University of Washington, they have to wait for someone to stop swinging a machete around before they can come out of their class. A woman was violently assaulted just walking to lunch in downtown Seattle. And she looked around and she said, “What do I do?” And someone said, “Don’t call the cops, because nothing will happen.”

So it’s clear that we have a lot of work to do. That is clear. I honestly, I’m proud to be endorsed by WACOPS (Washington Council of Police & Sheriffs) and the Fraternal Order of Police, they know that I have their back. They know that the bedrock of society is law and order. We need that now, more than ever, for our kids, for our families all over Washington state. Senator Murray, she has good talking points for Washington, D.C. I’ll go fight for Washington state, for our kids and for your families.

Do you believe humans are contributing to climate change?

Smiley: We need to protect our environment, and our climate. We all live on this planet. I think, to be clear, we need to have an approach – my agenda for economic recovery and reform calls for immediately unleashing our natural gas and our oil pipelines so we can lower the cost for you, now, immediately, while we work for a long-term perspective of an all-of-the-above approach, and expand our green energy, and our clean energy.

Washingtonians should not have to suffer for some D.C., pie-in-the-sky idea of climate.

Murray: You just heard a plan to increase emissions. Our plan to stop the effects of climate change is to lower emissions, and that’s what our bill did. And yes, humans have an impact on this. When we use products that create emissions, when companies do, it creates climate change, and we need to address that.

The NRA Used to Donate to Democrats’ Campaigns, Too. Why Did It Stop?
‘The American People Agree With Pres. Biden’: Juan Williams Argues For an Assault Weapons Ban on Fox News
Bill Whitaker: Beto, Trump not out for the count
Decked USA Factory Look and Interview MADE IN THE USA
A plea, a shout, alas, a reiteration over mass shootings