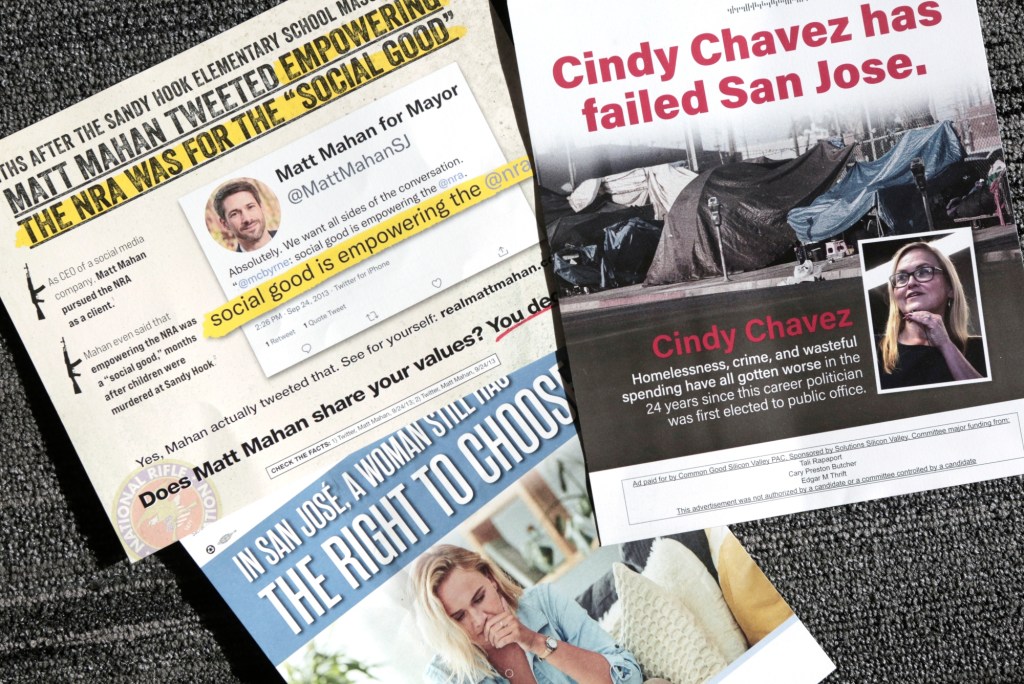 One piece of campaign mail sent to San Jose voters says mayoral candidate Cindy Chavez “has a history of scandals, corruption, and dishonest backroom deals.” Another declares her opponent Matt Mahan said he believed in “empowering” the National Rifle Association, just months after a gun massacre.

Chavez, a Santa Clara County supervisor, and Mahan, a San Jose city councilman, both say the campaign pieces targeting them were unfair. But the candidates weren’t the ones responsible for the mailers.

As the two politicians square off for the Nov. 8 election that will decide who leads the Bay Area’s largest city, moneyed interests are waging a shadow campaign alongside Chavez and Mahan through independent political committees, which aren’t held to spending limits like the candidates, and produce some of the most bitingly negative attacks.

A Bay Area News Group analysis shows the Chavez and Mahan campaigns together have amassed nearly $3 million so far. But their special-interest supporters combined have separately put what is believed to be a record $3.8 million into the race, either through independent expenditure committees formed to spend exclusively on this race, or general political action committees that serve business or labor organizations.

The U.S. Supreme Court’s 2010 Citizens United v. FEC decision held that free speech rights allow corporations or unions to spend unlimited sums on political advertising, free from government restriction, as long as they don’t coordinate with a candidate or political party. The ruling effectively unleashed election spending outside official campaigns, where in San Jose, contributions to mayoral candidates are limited to $1,400 per election.

Mahan, a first-term councilman representing the city’s southwest District 10, has raised nearly $1.6 million so far for his campaign, a little more than the $1.4 million that Chavez, who served as a downtown district councilwoman and vice mayor from 1999-2006, has collected.

Outside groups backing Mahan have tossed another $772,525 into the race on his behalf. They include:

Outside groups backing Chavez have kicked $3 million into the race on her behalf. They include:

The considerable support from outside groups has drawn questions, including at a debate last week. Asked about the 49ers substantial support for her, Chavez said she “would not have run again had I not had a broad section of the community supporting me.”

She added: “I’ve been in public office for a long time, and you’d be hard-pressed to find that my decisions have been impacted by outside resources I’ve received.”

Mahan has said his campaign is “much more grassroots” and that “the majority of special interest money has gone in for my opponent.” He said interests like the 49ers don’t invest “over $700,000 in a politician” like Chavez “without expecting something in return.” Regarding those backing him, he added that “the system is broken – if I had my way there’d be no outside spending, but ultimately, that’s a Supreme Court decision.”

The groups behind these campaigns aren’t required to explain their interest in the race. Rahul Chandhok, the 49ers communications chief who heads the Citizens for Cindy Chavez committee, said in a statement in April that the team was impressed by the supervisor’s “exemplary leadership during the pandemic,” calling her “instrumental in launching California’s largest vaccination site at Levi’s Stadium last year.” Chandhok said in an email the 49ers weren’t paid for their stadium’s use for vaccinations but declined to elaborate further on the earlier statement.

Asked about his group’s support for Chavez, Guardino said he was impressed with her work to help pass affordable housing and transit bonds he pushed.

“There is no one more skilled at having a big, ambitious vision, who understands the component parts necessary to achieve that vision, and has the ability to bring together diverse voices to accomplish that goal,” Guardino said. He added that regarding his relationship with Mayor Liccardo, “different viewpoints on politics and policy will never stand in the way of our friendship.”

Often, it’s the outside groups that do some of the hardest-hitting campaign pieces. In a race centered on approaches for reducing crime and homelessness, outside ads have pulled from the candidates’ past to level character attacks.

That referred to a 2006 scandal that consumed former Mayor Ron Gonzales in his final year when he was indicted on charges of secretly brokering an $11 million deal with a trash hauling company to cover costs of a higher-paying union contract. Chavez, vice mayor and a candidate to succeed Gonzales at the time, testified along with other council members before the grand jury.

A judge later dismissed the indictment, citing prosecution errors in the grand jury instructions, and the district attorney’s office dropped the case. Chavez never was charged, but because she was vice mayor, the scandal tarnished her first run for mayor in 2006, which she lost to Gonzales critic Chuck Reed.

Chavez said the real estate group behind the ads resorted to “any means necessary, including outright lying, in order to prop up Councilmember Mahan,” and speculated it opposes her because she had supported an eviction moratorium during the COVID-19 pandemic.

Gina Zari, government affairs director for the Santa Clara County Association of Realtors, said the ads raised legitimate questions about what Chavez knew about the deal given her position and said her group opposes Chavez because she wasn’t responsive to their efforts to meet with her, which Chavez disputes.

The Labor Council PAC was behind the ads that blasted Mahan for enabling the NRA, but Chavez said it’s entirely fair. The ads refer to Mahan’s role as a technology entrepreneur leading Brigade, a company since acquired by Pinterest and Countable that provided an open platform for political advocacy.

“As a businessman, he tried to get the NRA to use his platform to be more effective, and I think that enabling organizations that directly fight fair, logical gun protections for children and our families is worth the public knowing,” Chavez said.

Mahan countered “that would be like saying Facebook and Twitter should kick the NRA off” social media, which he also noted Chavez uses. “While I don’t agree with the NRA on most issues, I’ll absolutely stand up for their freedom of speech on internet platforms.”

In the end, San Jose voters will be left digging attack ads from their mailboxes for another two weeks. How they will be influenced is another question.