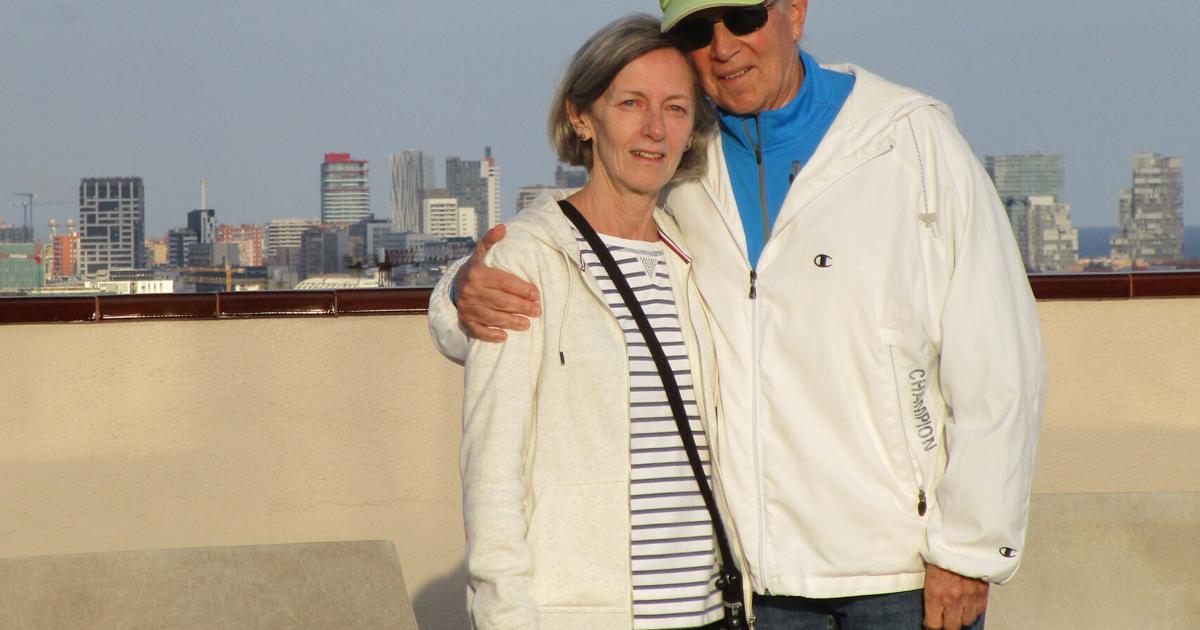 Nicholas Claps grew up in the middle of New York, the middle son of not-quite middle-class parents.

His dad Julius measured inseams in a factory that made men’s suits.

His mom Helen — a beautician by trade — stayed home with their three boys on a suburban street filled with cookie-cutter houses in Syracuse.

When a small private college from the Panhandle of Nebraska came recruiting students — often sending its president back East to do the convincing — Mom and Dad Claps came to listen.

And in September 1967, their son was on a plane, heading to a fledgling college 1,600 miles away in sugar beet country, in a state he knew only from geography class.

Four years later, he graduated from Hiram Scott College, named for the fur-trapping mountain man who died near the bluffs in the early 1800s.

A few years later, Claps returned home to New York. He joined the Air Force. He married a girl he’d met in the fourth grade and landed a job as a science teacher.

He and Mary Beth bought a starter house. Then they started to follow the financial advice of a Nebraska guy.

“We have the same philosophy as Warren Buffett,” said Claps, 76. “Buy what you need and save the rest.”

Nicholas Claps’ book, “Lessons and Suggestions for Building Your Wealth,” is available on Amazon or Barnes and Noble’s website.

All of the paperback’s profits go to the Nicholas J. and Mary B. Claps Scholarship Fund at the University of Nebraska Foundation.

He and Mary Beth never had children. And they were so successful at imitating Buffett that, a few years ago, they wrote a book, “Lessons and Suggestions for Building Your Wealth.”

They gave a copy to their 19 nieces and nephews.

“It’s advice we wish someone had given us when we were young,” Claps said.

All of the paperback’s profits go to the Nicholas J. and Mary B. Claps Scholarship Fund at the University of Nebraska Foundation.

A scholarship the couple calls: The New York to Nebraska Connection.

A scholarship that traces its roots to a long-forgotten college that couldn’t pay its bills and closed its doors just as Claps strolled out with his diploma, on his way to becoming the Millionaire Next Door.

He has few photos from those days; his memories as dusty as the Scotts Bluff County landscape.

But the more he talks, the more he remembers. He remembers living in the dorm with other young men, his floor filled with education majors.

“Everybody was buddy-buddy there.”

He remembers the quad and the cafeteria, chemistry and biology classes in a brand-new building on the 275-acre campus north of town.

“The instructors always had their doors open to students.”

He remembers going home for the summer, trying to explain the place: “I’d tell Mary Beth, ‘If your car broke down in Scottsbluff, the first car to come by would stop to help.’”

He had a scale for the pace of life. New York City: maniacs. Syracuse: fast. Scottsbluff: snail.

“You could relax for a bit out there.”

During his student teaching days in nearby Gering, he and his classmates rented efficiency apartments. When he asked their landlady for a key, she pointed to hooks outside the doors, where the keys hung.

“No one locked their doors.”

Back home, he landed his first teaching job at a new high school in suburban Syracuse, impressing the principal with his transcript and besting a crop of Syracuse University grads.

“I was a happy-go-lucky teacher. I loved it.”

Nick and Mary Beth upgraded from their starter house to a place with a two-car garage and laundry on the first floor. They invested wisely and spent wisely. They bought reliable cars with the help of Consumer Reports. When Nick turned 48, he retired. A few years later, Mary Beth followed.

The unassuming millionaires enjoyed life, traveling and reading and gardening, and they started contemplating the future.

Claps knew the University of Nebraska had purchased his failed college and turned it into an agricultural research center. He became a de facto Husker, joining alumni travel groups and connecting with the NU Foundation.

The deal: Full tuition, plus room and board.

The hitch: The Empire State kids must attend school in the Cornhusker State.

The couple has tweaked the endowed fund over the decades, said Keith Napolitano, director of gift planning. Along the way, he’s gotten to know the man who adopted the university —  and Nebraska — as his own.

“He loved his education here. He’s been successful in saving and wants to give that back.”

The NU Foundation doled out more than $33 million from scholarship funds last fiscal year, money that went to 10,574 students, across five campuses. And it oversees 5,154 funds of all stripes.

Scholarships for human rights minors and art majors and students interested in the military. Scholarships given in honor of parents, grandparents, children, quirky biology professors.

Scholarships for kids from this county or that, most of them, of course, Nebraska counties.

“Almost every scholarship has criteria,” said Dorothy Endacott, the foundation’s vice-president of marketing and communication. “His criteria just happens to be upstate New York.”

Six years after Hiram Scott enrolled its first students — Miss Cathi Hansen of Crawford and Miss Lenore Barta of Scottsbluff — the little college on the Oregon Trail collapsed like its namesake and died.

In its first year, the school enrolled more than 500 students; a few years later, 1,500. But soon enrollment dwindled and debts soared.

When Claps strode across the auditorium stage, a member of the graduating class, he was unaware of the unfolding calamity.

The businessmen who’d touted the college six years earlier — Soon Scottsbluff will be known for more than sugar beets and cattle! — found themselves in a pickle, one shared by hundreds of small colleges of the era relying on tuition to pay the bills.

The magazine noted that Weese, the college’s final president, lived nearby and helped himself to the cafeteria’s abandoned rice supply.

“I’m getting pretty good with the dishwasher,” the Chaucer scholar told the magazine, “and I’m a pretty good cook, too, but you lose your steam.”

No local organizations seemed interested in the “slightly used” college, Time wrote, but trustees were at work trying to offload it to the National Rifle Association or the U.S. Chamber of Commerce for pennies on the dollar.

Instead, the University of Nebraska bought the 275 acres and the buildings planted on them. The Chadron Record dubbed the move a political boondoggle, berating Scottsbluff leaders for starting a college where none was needed and a power move by the university to expand its influence.

The University of Nebraska Panhandle Research and Extension Center chugs along in the red-brick campus, employing 100, including professors, and welcoming visiting students throughout the year.

It noted: “The college had a big impact on what had been an isolated rural town.”

Hiram Scott had enticed Forddy Anderson, who was the first coach to guide two men’s basketball teams to the NCAA Final Four, to coach the Scots, a feat that landed Anderson — and the college — in Sports Illustrated.

A Hiram Scott football player was drafted by the Baltimore Colts; hoops star Richie Moore had a short stint with the American Basketball Association’s Denver Rockets, today the Denver Nuggets.

The state’s “Singing Historian,” Robert Manley, the man who popularized “Beautiful Nebraska,” taught there. Other East Coast transplants hung around and settled down, teaching school and raising families.

And then there was Nicholas J. Claps, who lived his life by the book and then helped write a book, sharing his wisdom and wealth, hoping to coax a new generation of New Yorkers to the land where a kid from Syracuse launched his life.

Claps won’t see any of the dozens, or hundreds, or thousands of New Yorkers who will eventually attend Nebraska, because they won’t start pouring into the state until after he is gone. But he’s hopeful that those fast-talking, fast-moving students from back home will discover what he did.

“In Nebraska you get to see more — and enjoy more — at a slower pace.”


Six-man football, invented in Nebraska, took off. Six-man baseball? Not so much.


Saving the story: Japanese immigrants made Nebraska home. A granddaughter is ensuring we remember.

Get our local education coverage delivered directly to your inbox.