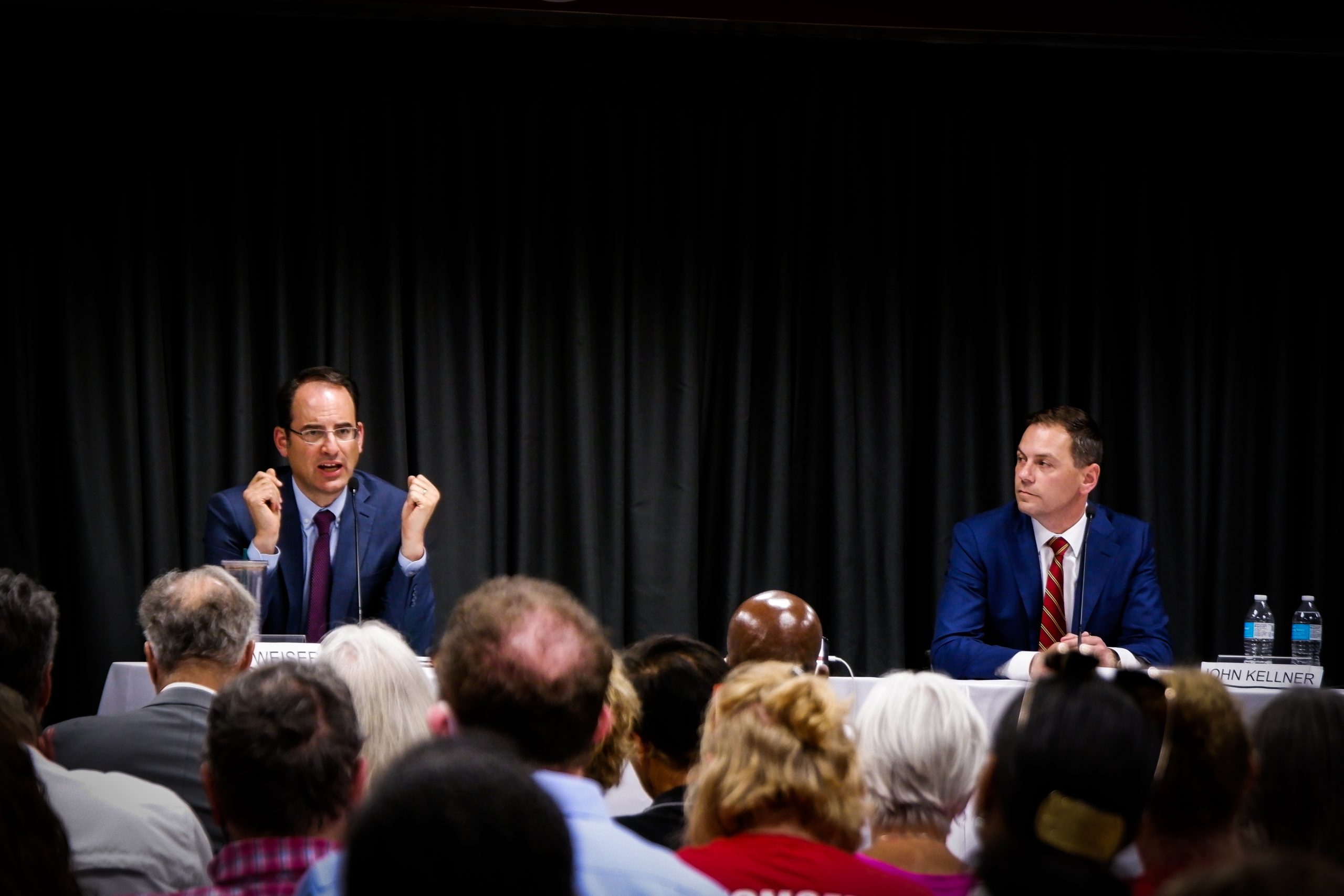 Here’s what you need to know about Weiser and Kellner.

Weiser, 54, is a former dean of the University of Colorado Law School, where he founded the Silicon Flatirons Center for Law, Technology and Entrepreneurship. He served as a law clerk to Supreme Court justices Byron R. White and Ruth Bader Ginsburg, and previously worked as a deputy attorney general in the U.S. Department of Justice. He was elected attorney general in 2018. He lives in Denver.

Kellner, 41, was elected district attorney in the 18th Judicial District in 2020 after working in the office’s cold case unit. He served in the U.S. Marine Corps after graduating from the University of Florida, and attended law school at the University of Colorado. His four years of active-duty military service included a deployment to Afghanistan. He now serves as a lieutenant colonel in the Marine Corps Reserves. He lives in Arapahoe County.

The Colorado Attorney General’s Office has limited criminal jurisdiction, meaning it can’t prosecute every crime committed in the state. The office typically prosecutes criminal matters when they span multiple counties or are statewide, such as Medicare fraud and organized crime rings. The main focus of the office is on civil court matters, like lawsuits.

Still, rising violent crime rates in Colorado have become a major centerpiece of the race between Weiser and Kellner.

Kellner acknowledges the limited role the attorney general plays in criminal matters, but says Weiser should have done more as attorney general to advocate at the legislature for a tougher criminal code, namely when it comes to fentanyl and auto thefts.

“I see the attorney general’s office as being really the bully pulpit, the person who has the best ability to influence public safety outcomes and legislation at the state level,” Kellner said.

Weiser points out that it’s in fact district attorneys like Kellner who are responsible for prosecuting most crime.

“The attorney general prosecutes only organized crime and fraud cases, which means the only auto theft case that we would do is like an organized criminal enterprise,” Weiser said.

Kellner says he would have opposed a bipartisan 2019 state law that made personal possession of up to 4 grams of fentanyl and most other drugs a misdemeanor.

Weiser said he opposed and wasn’t involved with the 2019 measure: “It was a bipartisan bill that I hadn’t supported.”

The legislature amended the 2019 law earlier this year to make it a felony to possess a gram or more of fentanyl and to increase penalties for fentanyl dealers. The legislation also allocated millions of dollars to treatment, prevention and law enforcement response.

“I would have gone further and reduced the possession to as low as we could get, but the lowest we could get it was 1 gram,” Weiser said.

Kellner said he would have preferred that the bill passed this year apply to a wider range of synthetic opioids so that the state is better prepared for the next wave of the opioid crisis.

The two candidates differ on a major water case before the U.S. Supreme Court, Sackett v. EPA, which seeks to limit the Environmental Protection Agency’s enforcement of clean water regulations. It’s a case out of Idaho where the EPA prevented a couple from building a house on a lot the agency considered a wetland.

Weiser’s office supports the EPA’s position in the case.

“Historically, the EPA has managed the system of permitting to ensure that projects will not harm water quality,” Weiser said. “Under the Sackett case, there’s now a real risk that the EPA will lose that ability, and that responsibility will be shifted to the state of Colorado.”

But Kellner said Congress could respond if the EPA loses the case by passing laws regulating clean water enforcement. He said he would have intervened in the case on behalf of the landowners suing the EPA.

“We ought to be concerned about potential overreach by the federal government, especially when it comes to water,” he said.

Weiser said he’s hired a staff of lawyers to protect Colorado’s water rights when it comes to disputes with other states, as well as protecting smaller communities from metropolitan areas trying to build their water supplies.

“The worst water decisions are those that harm communities like the San Luis Valley, or like Crowley County, and basically undermine their economies,” he said.

Kellner said he is concerned about the attorney general’s office “basically getting ahead of the policymakers as the legal representative for the state.” He noted that water rights are property rights and if someone “wants to sell them, there’s a process to adjudicate whether or not that goes forward, and it’s through water court.”

The National Rifle Association has endorsed Kellner, though he said he supports Colorado’s red flag law, which passed in 2019 and allows judges to order the temporary seizure of guns from people considered a risk to themselves or others.

Kellner originally opposed the red flag law, in part because of concerns that it isn’t limited to law enforcement taking such cases to court.

“I thought it should have been limited to police officers, but there’s been enough checks and balances in place and it’s worked,” he told The Sun. “OK to say I was wrong about that.”

He said he opposes measures passed by the legislature in recent years allowing some nonviolent felons to own guns.

“My opponent advocated for a bill that actually allowed convicted felons including car thieves and drug dealers to possess guns,” Kellner said in a 9News debate Wednesday.

But Weiser countered that the 2021 bill Kellner referred to had bipartisan support and was unanimously supported by Colorado’s district attorneys, and that it still prohibited gun possession for 60 felonies. Weiser said he wants to ensure people convicted of car theft and drug dealing are on the prohibition list.

Weiser is endorsed by Everytown for Gun Safety and other groups that seek to increase gun control measures. He said he’d like to see continued improvement of Colorado’s gun safety laws, which already include universal background checks, a ban on the sale and possession of magazines with a capacity larger than 15 rounds and a temporary prohibition on gun ownership by people convicted of certain violent misdemeanors.

“I think about this the same way our nation has thought about traffic fatalities,” Weiser said. “This is a public health challenge. We are losing so many people, particularly young people, to suicide because of firearms.”

“Colorado, through its legislature, has spoken on the issue,” Kellner said at a debate earlier this year. “And, frankly, the people have spoken on this issue multiple times at the ballot box as well. As the attorney general, I can commit to you that I will defend the law.”

Weiser said he expects to see the abortion debate continue.

“I will defend the principles that underlie Roe vs. Wade,” he said. “And I believe that our nation will protect access to reproductive health care, but it’s going to take continuing political and legal battles.”

Both Weiser and Kellner also said in a previous debate that they would defend anyone who travels to Colorado to get an abortion despite laws in their home state prohibiting the procedure.

Weiser: “If any other state tries to criminalize a patient or doctor here in Colorado, I will be fighting to protect Colorado’s law and patients and doctors who are here in our state.”

Kellner: “No other state can reach in and say, ‘look, we’re going to tell you, Colorado, what to do.’”

Kellner has declined to elaborate on his personal position on abortion.

If gay marriage were challenged in the courts, Kellner said he’d also intervene. “I would defend gay marriage,” he said. “I wholly support (the right of) people to marry whomever they love.”

Weiser noted that marriage isn’t protected by existing Colorado law, and said that should change.

“I will push for a state constitution amendment in Colorado to protect same-sex marriage,” he said.

We asked both candidates to share an example of a time they changed their minds on an issue or had to compromise.

Kellner said that as a Marine Corps lawyer he helped prosecute service members for drug use, causing them to be discharged from the military without benefits. Often, those people were suffering post-traumatic stress as a result of their combat deployments.

“That wasn’t the right thing to do,” Kellner said, so he helped create a veteran’s treatment court in 2013 “to hopefully get them on the right path.”

Weiser said he compromised on the fentanyl bill passed by the legislature this year. He wanted stiffer possession penalties.

What else you should know

In 2019, Weiser supported a Philadelphia nonprofit in its legal battle with the Trump administration over whether the group should have been allowed to open a supervised drug consumption site in that city. The nonprofit eventually lost its case.

Weiser says he doesn’t support the concept — which was floated in Denver but shelved because of political pushback — and that he got involved because he saw it as a states’ rights issue.

“I don’t support supervised injection sites in Colorado,” Weiser said during the 9News debate. “The action in Pennsylvania wasn’t because I support those sites. It’s because of a principle that states should be allowed to experiment. We have legal and regulated marijuana. At that time, Attorney General Jeff Sessions was attacking our system of legal and regulated marijuana. What I support is state authority to make decisions for themselves, to experiment.”

Weiser has been a champion of law enforcement reform, but Kellner has staked a different position on the issue. He said he disagrees with the legislature’s 2020 move to eliminate qualified immunity for police officers, allowing them to be sued in their individual capacities.

“There are a couple of bad apples out there, and we weed them out,” he said during a debate earlier this year. “But, writ large, I think the police in Colorado do a dangerous and difficult job and they do it to the very best of their abilities. We do need to hold people accountable when they break the law. But I want to be really clear that I support the police here and the valuable work they do.”