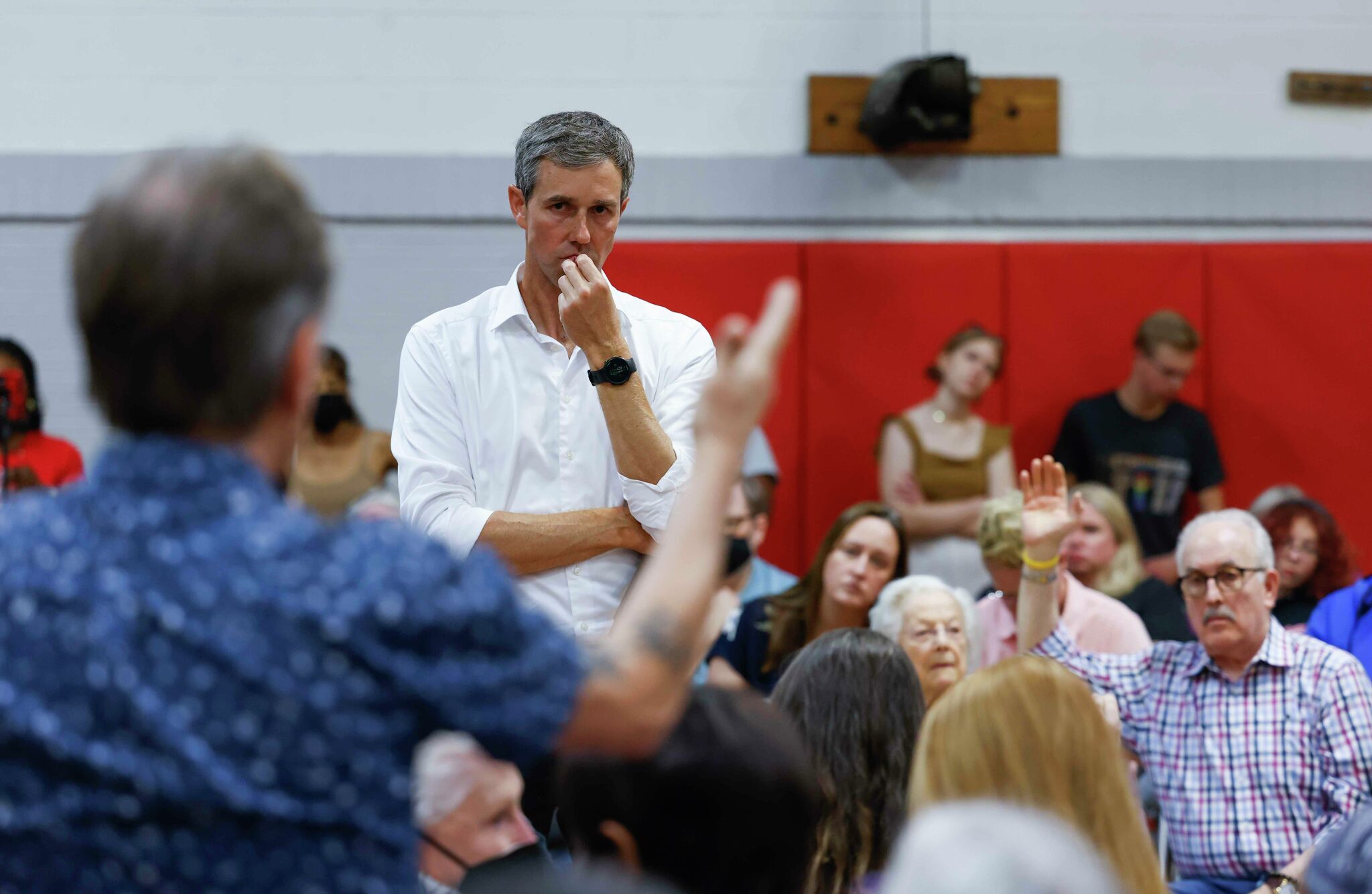 Beto O’Rourke is seeking to become the first Democratic governor in Texas in nearly 30 years, but to win he’ll have to overcome the wreckage of his failed bid for the White House, which has irreversibly changed him in the eyes of some voters and opened him up to attacks that he is too liberal for the moment.

The poll-defying, go-everywhere energy that O’Rourke rode in his 2018 run for the U.S. Senate brought him national attention and a record-shattering fundraising machine that has turned him into the most dangerous Democratic challenger Gov. Greg Abbott has faced in his nearly three decades in politics.

But even as he draws massive crowds and has become a more seasoned candidate overall, the 2019 presidential campaign has given Republicans openings to go after O’Rourke on guns and climate change, issues that could make or break his once deep appeal to moderates and independents.

O’Rourke is still answering for his “hell yes” call in a 2019 Democratic debate to seize semi-automatic rifles such as the AR-15s and AK-47s used in Texas mass shootings, explaining at the time, “we’re not going to allow it to be used against our fellow Americans.”

The remark played well with the larger Democratic electorate, but it was a red flag for some in Texas, a state with a long, proud tradition of gun ownership.

In a sharp right turn, Gov. Abbott transforms into a culture warrior as he seeks third term

O’Rourke says he still believes those weapons should not be sold, but he’s no longer campaigning on taking them away — a key distinction he makes every time he is asked about the comment. He says he has settled on gun proposals that have more universal support — such as raising the age to buy those weapons as Florida has done.

Abbott has used the debate clip to paint O’Rourke as a flip-flopper, not only on guns but also climate change, border policies and defending the police — all since his campaign for the White House.

“Beto’s been trying to reinvent himself the entire campaign, hoping Texans would forget his past positions,” said Mark Miner, campaign communications director for Abbott.

O’Rourke says there are false claims and a lot of missing context in the attacks, the public clearly sees him differently than they did before the presidential election.

This is a carousel. Use Next and Previous buttons to navigate

Since 2018, Quinnipiac University polling has shown O’Rourke’s favorability rating among independent voters has gone from 56 percent to 42 percent in just four years. Similarly, the University of Texas released polling in August that showed 63 percent of independents now have an unfavorable view of O’Rourke, up from 42 percent four years ago.

University of Houston Political Science professor Brandon Rottinghaus said there is no doubt voters see O’Rourke differently. Texas politics has gotten so nationalized that it’s hard for candidates to avoid getting caught up in the red vs. blue battle that O’Rourke joined in 2019 as he ran for president.

Still, even though he’s not leading in any public polls, O’Rourke is now in a strong position in the stretch of the campaign. Since he came within 2.6 percentage points of winning in 2018, Texas has added about 2 million registered voters, with the biggest growth coming in Democratic strongholds along Interstate 35 and in Harris County.

And in this cycle, O’Rourke’s campaign has become even more adept at building a get-out-the-voter operation. His team has signed up over 100,000 volunteers for what has become a giant door-knocking, letter writing machine. O’Rourke says it will make the difference on Election Day.

And his message to voters is in many ways clearer than it was against U.S. Sen. Ted Cruz in 2018. In that race, O’Rourke tried to avoid attacking Cruz.

But the gloves are off with Abbott as O’Rourke blames him for the failure of the grid, for gun violence in schools and for low teacher pay that has many leaving the profession or heading to other states.

“Look, I don’t think that Greg Abbott wakes up wanting to see children shot in their schools or for the grid to fail, but it’s clear he is incapable or unwilling to make the changes necessary to prioritize the lives of our fellow Texans,” O’Rourke said during their only debate in Edinburg last month.

Though O’Rourke strives for a nonpartisan feel to his campaigns, he came from a deeply Democratic household.

From city council to Congress

An El Paso native, O’Rourke was 32 when he launched his political career running for a seat on the nonpartisan city council, knocking off an incumbent and setting the stage for a 17-year run in elected office.

His start in politics was a defining moment for O’Rourke, who said it instilled in him a commitment to seek compromise and consensus for the sake of getting things done.

“As you know, on a city council in Texas you’re not a Republican. You’re not a Democrat,” he said drilling home the point during an interview at the Texas Tribune Festival in Austin last month. “You’re just there to deliver for the people who put you there.”

It’s an approach that used when he ran for Congress in 2012.

In D.C., he tried to carve out a role as an independent who authored bills with Sen. John Cornyn, a Republican, and voted more than 150 times with Republicans over 6 years.

That voting record gave him one of the highest bipartisan ratings among Democrats from independent groups such as the Lugar Center in Washington D.C., which measures how often a member of Congress introduces a bill that attracts co-sponsors from the other party, or they join as a co-sponsor with members from the other side.

O’Rourke frequently found himself an outlier with other Democrats on issues including oil, as he defended fracking and the industry as a whole.

When he emerged from his race with Cruz and dove into the presidential race, his more moderate political lane seemed clear as Joe Biden was sending mixed signals about whether he would enter the race. In those early days in Iowa, O’Rourke was back to his standard vow to go everywhere and talk to anyone and find the spirit of compromise even with the most ardent Republican.

But then Biden got into the race and easily overtook O’Rourke among Democrats looking for a more moderate candidate than Bernie Sanders and Elizabeth Warren.

Crowded out by Biden, O’Rourke began sounding more progressive as the campaign moved on. O’Rourke praised the Green New Deal for its ideas and ambition and later called for tearing down the border fence in El Paso on national TV. After mass shootings in El Paso and later in Midland and Odessa, he declared his support for the mandatory gun buyback program.

But O’Rourke said he stands by those positions, even as he calls for different solutions now. He said it is critical to understand that he called for taking AR-15s off the street in 2019. It was just a few months after a gunman murdered 23 people with an AK-47 at an El Paso Walmart, and after seven people were killed by a gunman armed with an AR-15 in Odessa-Midland.

And when he praised the Green New Deal, which called for 100 percent renewable energy by 2030, it was the only comprehensive framework to deal with climate change. Since then, he said there’s been a better plan developed by the AFL-CIO in Texas that keeps oil and gas workers employed, but also creates clean energy jobs.

“It’s not talking about replacing anybody,” O’Rourke said, a nod to the critics of the Green New Deal who have said it would eliminate thousands of oil and gas workers in Texas.

It’s all nuance that Republicans say voters aren’t going to buy. Austin Republican strategist and Travis County GOP chairman Matt Mackowiak said no matter how O’Rourke spins it, he went too far in trying to win Democratic voters and damaged his electoral prospects in Texas.

Mackowiak said no issue is bigger than his comments on guns.

“Beto is a reckless candidate and when he was running for president he positioned himself in a moment with an over-the-top comment that he continues to pay for politically,” Mackowiak said. “No matter what Beto says now, it can never unring the bell that he supports gun confiscation in a strong 2nd Amendment State.”

For his part, O’Rourke refuses the shy away from the topic of gun control, particularly after the Uvalde school shooting that left 19 kids and 2 teachers dead at the hands of another AR-15 in the hands of an 18-year-old.

O’Rourke has prominently featured Uvalde families in his ads and during campaign stops, convinced Texans are ready for reforms to stop the next school shooting. He said Texans want change to protect their children and he’s going to make sure they get it, pressing for raising the age to buy an assault-style rifle from 18 to 21.

Abbott has called that law change a “false promise” to the Uvalde families, saying such a law would be unconstitutional.

But legal experts say the case law on the matter is not as clear as Abbott says, given that other states have enacted such age restrictions and the U.S. Supreme Court has not directly addressed the matter.

“We’re going win because we prioritize the lives of our kids over the interests of the NRA,” O’Rourke said to a roar of more than 4,000 supporters at a rally in Austin in earlier this month.