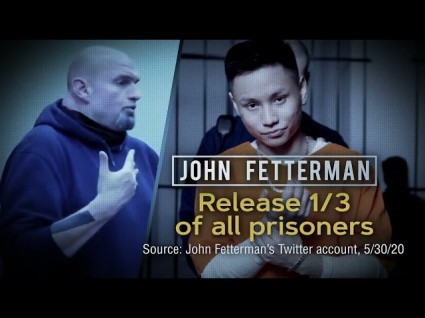 That Fetterman ad up there? That was one of the nicer ones. Watch this Australian Sky News segment to see the kind of vile ads which are innundating Pennsylvania airwaves:

Here’s the mild reponse ad from Fetterman, and honestly, I have no idea at all whether it’s effective. Because I’m a Democrat, and I’m living in a state of panic right now:

Those Citizens for Sanity ads are running all over the country. Who are they? Will Bunch looked into these “deliberately deceptive ads”:

Every few innings, the dark, grainy TV spots — with a flood of unsettling images of urban crime and civic unrest, or large migrant caravans streaming toward the U.S. border — broke up the stream of otherwise cheerful spots for iPhones or car insurance. One says “illegal immigration is draining our paychecks, wrecking our schools, ruining our hospitals and threatening your family” — blaming President Biden, and telling Democrats to “stop hurting our children,” against an ominous, empty playground swing. The crime spot blames liberals for a wave of “violence, bloodshed and death” as men with machine guns roam an urban wasteland.

So who’s doing this?

Open Secrets reports a close overlap between the trustees of Citizens for Sanity — as identified to the Federal Communications Commission, or FCC — and the pro-Trump America First Legal Foundation, which is spearheaded by Stephen Miller, the former Trump White House official behind harsh immigration policies such as family separation at the southern border.

It says three political operatives involved with the Miller-founded legal group — Gene Hamilton, John Zadrozny and Ian Prior — are also listed as involved with Citizens for Sanity. Zadrozny’s path, for example, has taken him from the fiercely anti-migrant Federation for American Immigration Reform — which the Southern Poverty Law Center has listed as a hate group — to the Trump administration, including a stint as a top U.S. Citizenship and Immigration Service official, to the vile ads you’re seeing on TV now. Citizens for Sanity treasurer Hamilton was point man on Trump’s efforts to kill the program seeking legal status for young migrant “Dreamers.”

But we still don’t know who’s paying for them. That’s the thing about these dark money groups.

And the thing that pisses me off is, I think these ads are relatively easy to rebut. The reason we have a huge surge of gun crime in Philadelphia is that NRA-backed Republican state legislators refuse to allow Philadelphia to make their own gun laws.

Because most voters don’t do nuance. They make their decisions based on ads, and these disgusting ads have Mehmet Oz closing the gap with Fetterman.