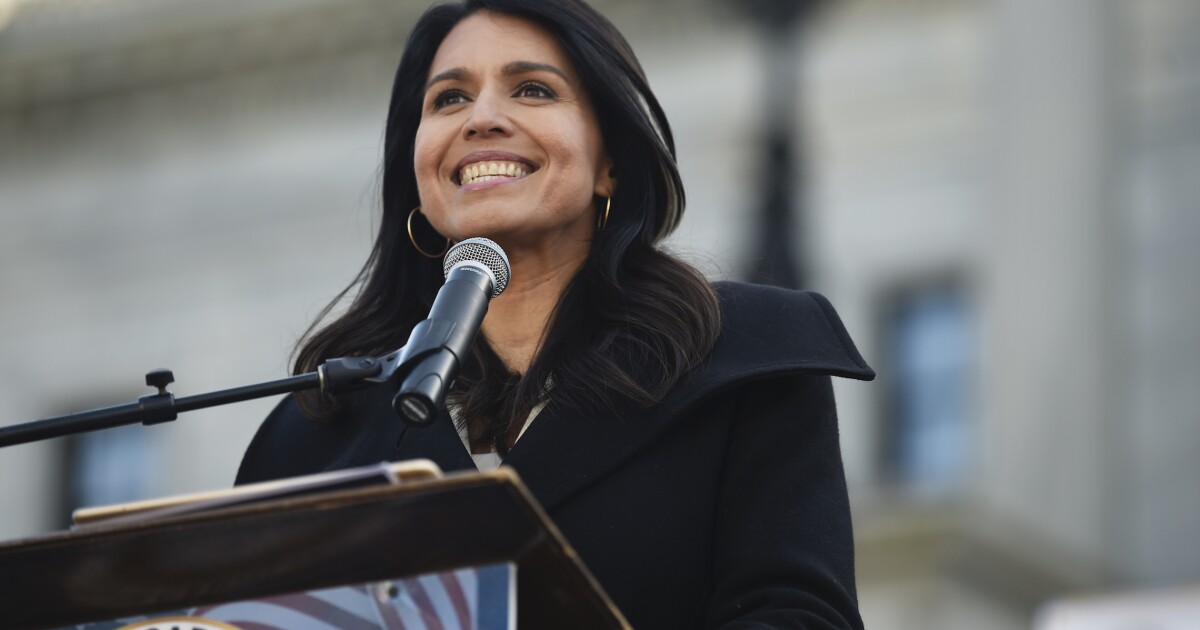 Former Rep. Tulsi Gabbard is extremely likable. As a veteran and active member of the Army Reserve, it’s clear she has a deep love for her country. As a presidential candidate in 2020, she stood out among her Democratic Party peers for her knowledge and poise. She held her own with the more experienced members of the party. But this week, Gabbard announced she is leaving the Democratic Party, which she called an “elitist cabal of warmongers driven by cowardly wokeness.”

It’s a good thing Gabbard is rejecting many aspects of leftism. It also doesn’t make her a conservative leader.

It’s far too easy for people on the Right to embrace those who leave the Democratic Party. Defection isn’t easy, given our intense polarization. It is certainly admirable. However, not being a Democrat doesn’t make Gabbard, or anyone else, a Republican, conservative, or like-minded when it comes to the most pressing issues. That point is often overlooked when ideological enemies lose one of their own. That Gabbard rejects the progressive mentality fueling leftist culture wars is commendable. But conservatives must remain sober in their evaluation.

This phenomenon of embracing those who stand against Democrats or the Left is not limited to former politicians. Musician Kanye West, now known as Ye, is another example. The pull of celebrity entices conservatives to cheer on or even defend him even when he says or does the indefensible. When a critical eye is needed most, it’s discarded in favor of being noticed by someone who draws a massive amount of attention. As others have explained about Ye, that only hurts the cause.

The news about Gabbard prompted all sorts of praise from the Right. Matt Schlapp, chairman of CPAC, tweeted, “We traded Liz Cheney and Adam Kinzinger for @TulsiGabbard?” Not only is this incorrect, but it also fails to measure anything beyond how Trump-critical each politician has been. Just based on votes alone, Cheney and Kinzinger rank more conservative than Gabbard. In addition, Gabbard hasn’t said she’s joining the GOP. As of now, she’s only left the Democratic Party and encouraged other “independent-minded Democrats” to do the same.

Gabbard’s most recent endorsements and ratings reflect something other than conservatism. In the area of gun control, Gabbard has a 0% rating from both the National Rifle Association and National Shooting Sports Foundation. In recent years, she has publicly supported bans on assault weapons, among other legislation supported by the gun control lobby.

Regarding abortion, Gabbard received a 100% rating from the Planned Parenthood Action Fund and 90% from NARAL Pro-Choice America, both in 2020. She received a 0% rating from both the National Right to Life and Susan B. Anthony list in the same year.

When it comes to fiscal conservatism, she received an 11% rating from Americans for Prosperity, 7% from Heritage Action for America, and 9% from the Club For Growth, all in 2020.

In addition, Gabbard’s statements regarding world leaders such as Bashar Assad and Vladimir Putin are extremely concerning. Gabbard has met with Assad and failed to call the Syrian president a war criminal on more than one occasion. Of the Russian president and his conquest of Ukraine, Gabbard has repeatedly failed to place blame where it belongs. On Twitter earlier this year, she stated the entire situation could have been avoided if President Joe Biden and NATO had “acknowledged Russia’s legitimate security concerns regarding Ukraine’s becoming a member of NATO.”

It could very well be that in the near future, Gabbard has a change of heart on these and other issues. It could be that she’s contemplating policy changes now. But from what we know, her statements, actions, and votes don’t reflect conservatism. Her allyship can be applauded without being turned into something it is not. Tulsi Gabbard is not a Democrat. Don’t confuse that as a synonym for conservatism.

Kimberly Ross (@SouthernKeeks) is a contributor to the Washington Examiner’s Beltway Confidential blog and a columnist at Arc Digital.