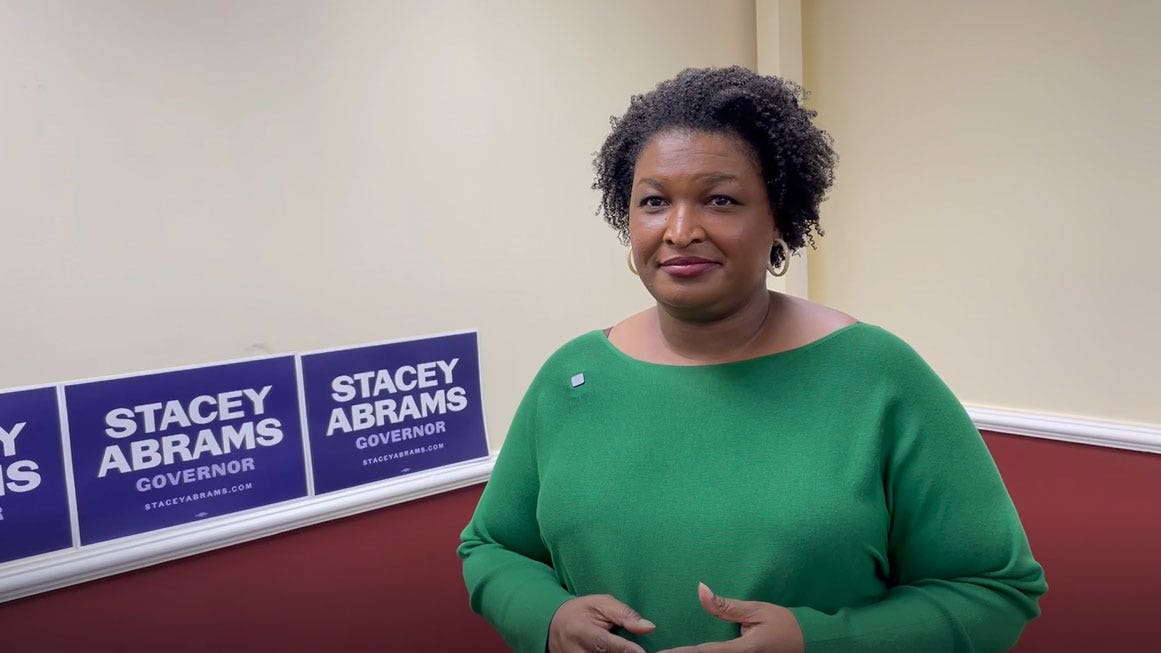 ATLANTA – EXCLUSIVE: Stacey Abrams is blasting Republican Georgia Gov. Brian Kemp for enticing increased Chinese investment in the state despite what she says is the greater threat to national security it could bring, as well as the potential surveillance of Georgians by the Chinese Communist Party.

In an exclusive interview with Fox News Digital, the Democratic nominee for governor hammered Kemp for using taxpayer dollars to encourage Chinese companies to purchase Georgia farmland, and cited Republican lawmakers, and former President Trump, who have expressed concern over China’s investments, to further her argument.

Abrams also warned against Georgia officials’ use of the Chinese messaging service WeChat, which shares its data with the Chinese government by law, to communicate with companies in China interested in investing in the state.

“We need to be deeply, deeply concerned, because it’s not just a national security issue, it is a Georgia ownership issue. [Kemp] is placing farmland in the state of Georgia in the hands of, basically, a nation that has proven itself to be a national security threat,” Abrams said.

“And what I’m specifically concerned about is WeChat. He is using taxpayer money to fund a website that uses an app that both Donald Trump and Joe Biden have called a threat to national security. More than 100 Republicans have called for better security because they understand that Tencent, the company that owns it, uses that data to surveil their people, and thus may be using that same data to surveil Georgians,” she added.

The taxpayer funded website Abrams cited is run by the Georgia Department of Economic Development, but has a Chinese country code top-level domain and includes all Chinese language content.

The website’s homepage features a video encouraging Chinese investment in Georgia and includes an appearance by Kemp touting the state’s economic connection to China.

“China is a top source for imports and our third-largest export market. We welcome thousands of Chinese visitors every year to the Peach State, and we are constantly helping to develop new opportunities for Chinese companies,” Kemp says in the video.

STACEY ABRAMS SAYS SHE’S BEEN IN CONVERSATIONS’ WITH WHITE HOUSE, WANTS BIDEN TO JOIN HER ON CAMPAIGN TRAIL

“The Georgia Economic Development Agency’s WeChat public platform regularly updates information and related reports on the state’s economic development. If you want to know more about the best location for the latest projects, Georgia’s competitive advantages, industrial layout, as well as the latest developments and market conditions in business, tourism, film and digital entertainment and other industries, you are welcome to subscribe to the official WeChat account of the Georgia Economic Development Agency,” it reads.

Governor Brian Kemp (R-GA) speaks during an election night party after winning re-nomination to be the Republican candidate for Governor on May 24, 2022 at the College Football Hall of Fame in Atlanta.
(Nathan Posner/Anadolu Agency via Getty Images)

When asked about the national security implications of WeChat, Abrams stressed the potentially dangerous affects it could have on Georgians.

“It is a breach of security, but it is also a breach of logic, and I don’t understand why the current governor of Georgia would be so eager to put us in the position of having Chinese nationals, who are using our state to surveil people — why he would not have better cybersecurity rules in place. And I think that’s a question he should be asked,” she said.

WeChat, owned by Tencent Holdings Ltd., a Chinese media conglomerate with ties to government intelligence services, was referred to in a recent article by Bloomberg as “China’s Most Beloved (and Feared) Surveillance Tool,” and is used by the Chinese government to monitor and censor messages sent within China and around the world.

While in office, Trump attempted to ban the use of WeChat, along with the popular video app TikTok, by executive order, but was blocked from doing so by a federal judge. President Biden later rescinded Trump’s orders, but directed such foreign apps with potential national security implications to be investigated.

Sen. Ted Cruz, R-Texas, and Sen. Josh Hawley, R-Mo., also introduced a bill that would have banned U.S. officials from using Tencent and other “Chinese Communist party-backed platforms,” but nothing of the sort has yet to become law.

According to the U.S. Department of Agriculture, Georgia is one of only 15 states with over 1 million acres of farmland owned by foreigners and has the 14th highest proportion of foreign to domestic held agricultural land, with foreign entities owning 3.6% of agricultural land in the state.

The increased investment by the Chinese in U.S. land has prompted security concerns among lawmakers, leading 100 House Republicans to write a letter earlier this month requesting the Government Accountability Office to investigate foreign investment in U.S. farmland, questioning whether Chinese acquisitions could pose a national-security threat.

Abrams further emphasized the potential threat continued Chinese investment could have on America’s ability to defend itself, citing the large U.S. military presence and infrastructure in Georgia, and warned against allowing more investment without regulation.

“Georgia has 13 military installations, we are the home to the CDC, we have two million military families in the state of Georgia, we have one of the largest economies in the nation, and we are one of the largest providers of access to food. Whether it’s selling our farmland to foreign national corporations without real metrics and controls, or allowing WeChat to actually have a location in state government, this is dire,” she said.

Kemp campaign press secretary Tate Mitchell did not speak to the national security concerns Abrams raised, but touted the governor’s record of economic growth in Georgia in a statement to Fox News Digital.

“Governor Kemp has overseen record growth and expansion of American manufacturing in Georgia. Under his administration, Georgia has broken records for job creation and investment for three straight years thanks to the pro-business, pro-American manufacturing policies that have created life-changing opportunities for families across our state — especially in rural Georgia,” Mitchell said.

“None of that would have been possible if Stacey Abrams were governor. At every turn, she championed job-killing positions like higher taxes, more regulations, and keeping Georgia’s economy in lockdown throughout the pandemic. With record low unemployment and more Georgians in the workforce than ever, our state is weathering the Democrat-created economic crisis because we said no to everything Abrams wanted to do,” he added.

Kemp signed a bill earlier this year that banned companies owned or operated by China from bidding on state contracts.

After publication, a source familiar with the situation told Fox News Digital that the WeChat account associated with the Georgia Department of Economic Development is not managed from within the department, but by a third party vendor, and has no connection with state servers.

The source noted that Abrams has a TikTok account operated by her campaign with more than 168,000 followers, but that the Kemp campaign did not have an account.

Fox News’ Power Rankings has rated the race between Abrams and Kemp as “lean Republican.”

The election will be held Tuesday, November 8.

Kathy Hochul Buffalo ally Sen. Sean Ryan takes aim at NRA – but beef is not about gun sales
Senator Bob Casey talks guns
Historic! PT Usha set to get elected as IOA chief
75 Years of Meet the Press
Could Your Dorm Roommate Be Carrying a Gun? These States Allow Firearms on College Campuses