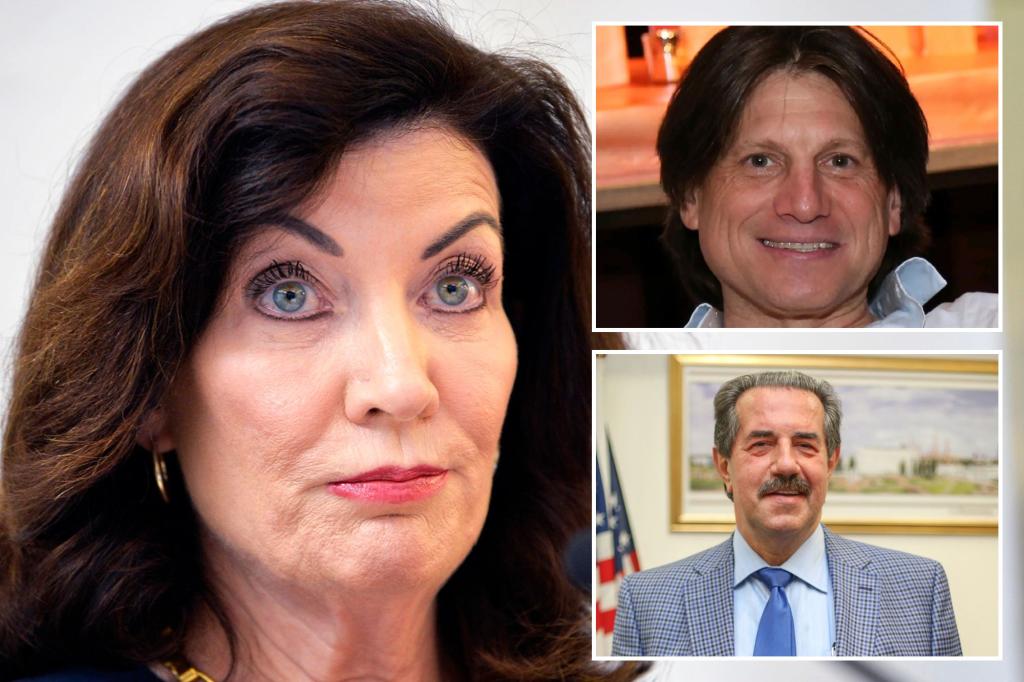 Kathy Hochul is an unelected governor who has used and abused her interim powers to her political advantage. In just a short time, she has amassed a thin record of accomplishments and left a trail of ethics nightmares that make her unfit for a full term as New York’s governor.

While she was lieutenant governor it was unclear what, if any, work she was really doing — even as so many of our state’s metrics declined. While thousands of senior citizens died in nursing homes, the now-governor was not to be found, playing no role in mitigating pain and saving the lives of New Yorkers when it counted.

The same question applies now: What does Kathy Hochul do all day?

Her top priority after assuming the reins from her disgraced boss, Gov. Andrew Cuomo, was not to shore up the state’s solvency or our communities’ safety or to open up much-needed jobs in our resource-rich energy reserves. She hasn’t so much as sought accountability for the nursing-home debacle.

Rather, she’s brazenly used state aircraft to hop from campaign fundraiser to campaign fundraiser, ignoring ethical concerns as she’s scooped up tens of millions of dollars in an unprecedented pandemic fundraising tour, hitting up even state contractors.

But that would only be the beginning of a string of ethical lapses.

Hochul agreed to a $1.4 billion deal for a new Buffalo Bills stadium, including more than $600 million directly from the state’s taxpayers (and $250 million from Erie County’s). Her husband is the general counsel of a firm that will benefit from the stadium’s food concessions in this sweetheart deal, which is far in excess of anything economically reasonable (the largest-ever taxpayer gift for a football facility). Those millions she diverted for her favorite NFL team could have gone to the greater good at a time of rising costs and rising crime and continued pandemic recovery.

Then came the pandemic pay-to-play scandal. Hochul signed a no-bid-deal with a political donor’s company to buy COVID tests. Digital Gadgets, a firm that had no experience with such tests, scored the $637 million contract after owner Charlie Tebele threw Hochul a fundraiser — and New York paid twice as much as other states paid for the same tests. Her campaign even hired Tebele’s son.

Under Hochul, donors get sweetheart deals and taxpayers get stuck with the bill.

The Post has documented a trail of state contracts and giveaways to companies connected to donors. Out the door went $1.2 billion in tax breaks related to Penn Station “redevelopment” to Vornado CEO Steve Roth, who with his family has given Hochul’s campaign tens of thousands.

She’s standing by a contractor the feds accuse of mishandling the state’s Medicaid transportation program, costing taxpayers up to $195 million in paybacks. Medical Answering Services owner Russ Maxwell just happens to be a Hochul donor.

Even as late as last week, Hochul was huddling with a billionaire donor who’s benefiting from her largesse to hospital systems. Hochul actually used her budget to bail out failed hospitals tied to Alexander Rovt, who with his wife has maxed out donations to her.

If a Republican were exhibiting the obvious pay-to-play connections for major donors, the mainstream media would be all over it — and all over the individuals involved. But as Hochul uses and abuses her office to raise more than $45 million for her political future, she escapes scrutiny and accountability.

On top of all these ethical concerns is the Hochul hypocrisy. While in Congress, she was tougher on crime and courted and received the endorsement of the National Rifle Association; today she says she’s all-in on gun control.

And she sides not with crime victims but with the proponents of radical bail reform, making only minor adjustments to the scheme. She’s absent when it comes to removing Alvin Bragg, the Manhattan “prosecutor” who lets criminals out of jail — if they go at all — and back on the streets. As a result, murder rates and violent crime are out of control here in New York.

There is a better solution — and a better person to be the next New York governor.

When I talk to New Yorkers — rich, middle class and those struggling to make a living — their No. 1 concern is the violent out-of-control crime. That is why I am supporting Rep. Lee Zeldin, a tough former paratrooper from the famed 82nd Airborne who will fire DAs who don’t prosecute violent crimes and be skillful enough to change bail laws and other soft-on-crime measures. He’ll also enact economic and energy policies that attract and retain people and employers in what should reclaim its identity as the Empire State.

And get this: Zeldin promises “100%” not to meet with any donors who have business before the state. We need a governor who puts the people of New York, not political advantage, first.