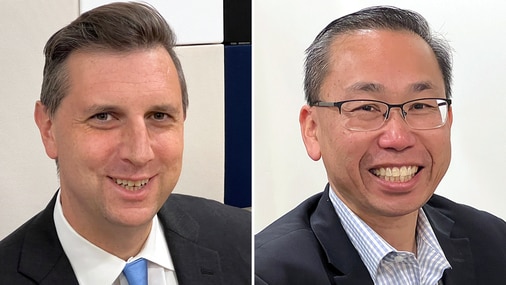 PROVIDENCE — Allan W. Fung made the case that he is a moderate and reasonable Republican in the mold of former US Senators John and Lincoln Chafee or Massachusetts Governor Charlie Baker, saying, “I’m not an extremist, not a Trumper.”

But Democrat Seth Magaziner argued that Fung would back House GOP Leader Kevin McCarthy and a “far right MAGA agenda,” saying, “There is nothing moderate or reasonable about the Republican agenda in Washington these days. This is not the Republican Party of John Chafee that our grandparents may remember.”

In Rhode Island’s Nov. 8 general election, the marquee contest is between Fung, the former Cranston mayor, and Magaziner, the current state treasurer, as they race to replace Democratic US Representative James R. Langevin in the 2nd Congressional District.

The candidates came into the Globe Rhode Island podcast studio separately to explain where they stand on major issues such as abortion, guns, and immigration. We put their responses together so voters can easily compare and contrast.

Attention has focused on abortion rights since the US Supreme Court overturned Roe v. Wade in June, and US Senator Lindsey Graham, a South Carolina Republican, has introduced a bill to create a federal ban on abortion at 15 weeks of pregnancy, with limited exceptions.

Fung said he would vote against that legislation in the House. “I do not support any national ban, nor would I ever support any proposal that would seek to criminalize any individual’s attempt to get an abortion or even for providers to provide that access,” he said.

When asked if he’d back the Graham bill, Magaziner said, “Absolutely no. I mean, listen, decisions about whether and when to terminate a pregnancy should be up to women, not politicians in Washington, D.C.”

Magaziner noted that Fung has said the Reproductive Privacy Act, which Rhode Island enacted in 2019 to protect abortion rights in case Roe v. Wade was overturned, “went too far.”

And Fung said he is opposed to the Equality in Abortion Coverage Act, which would provide for abortion coverage for Medicaid recipients and state employees. “I would not support taxpayer funding of abortions outside of what is already established in that federal Hyde Amendment, which allows it for the instances of life of the mother, rape or incest,” he said.

But Fung said he would support abortion access with an “early timeframe, similar to like the European model.” Abortion is legal for various timeframes in most of Europe, so Fung was asked if he is saying he is “generally pro-choice on abortion rights with certain limits and restrictions.”

“I think that’s a fair way to describe me,” Fung replied.

Magaziner said he received an “F” rating from the National Rifle Association because he supports “common sense gun safety” measures such as Rhode Island’s “red flag” law, which lets courts disarm those who are believed by law enforcement to represent a violent threat to themselves or others. “Listen, weapons of war do not belong in our schools and do not belong on the streets,” he said.

Fung, who received an “A” rating from the NRA, said, “It’s no secret that for all my time, I have supported the rights of law abiding citizens having access to firearms.” But he said he did support the bipartisan bill, championed by US Senator John Cornyn, a Texas Republican, that toughened background checks for the youngest firearms buyers and provided funds for improving school safety and mental health initiatives.

Magaziner said he supports the Electoral Count Reform Act, which aims to protect future elections and comes in response to the Jan. 6, 2021, attack on the US Capitol.

“To me the worst part of January 6th was not the actions of the mob or even the actions of Donald Trump,” he said. “The worst part was that even after all of that, over 100 Republican members of the House of Representatives came back and still voted against certifying the election.”

Fung said he is not familiar with the legislation, which has been championed by US Senator Susan Collins, a Maine Republican. “I haven’t seen that bill,” he said.

During the podcast, Fung and Magaziner also weighed in on immigration, student loan debt forgiveness, and who they want to see run for president in 2024.

While they disagreed on many issues, Magaziner and Fung found common ground on local cuisine.

“I know that Allan is a foodie, as am I,” Magaziner said. “So I’m sure we agree that Rhode Island has the best food in the country.”

Fung said he’s not sure what Magaziner’s favorite food is, but he loves chowder and clam cakes.

Hear more by downloading the latest episode of Rhode Island Report, available on Apple Podcasts, Spotify, Amazon Music, iHeartRadio, Google Podcasts, and other podcasting platforms, or listen in the player above.

Americans Are Disgusted by Republican Inaction on Mass Shootings
The Disturbing World of the New GOP
Historic! PT Usha set to get elected as IOA chief
How to Use a Button Compass: Navigation 101
Full transcript of “Face the Nation” on Nov. 27, 2022