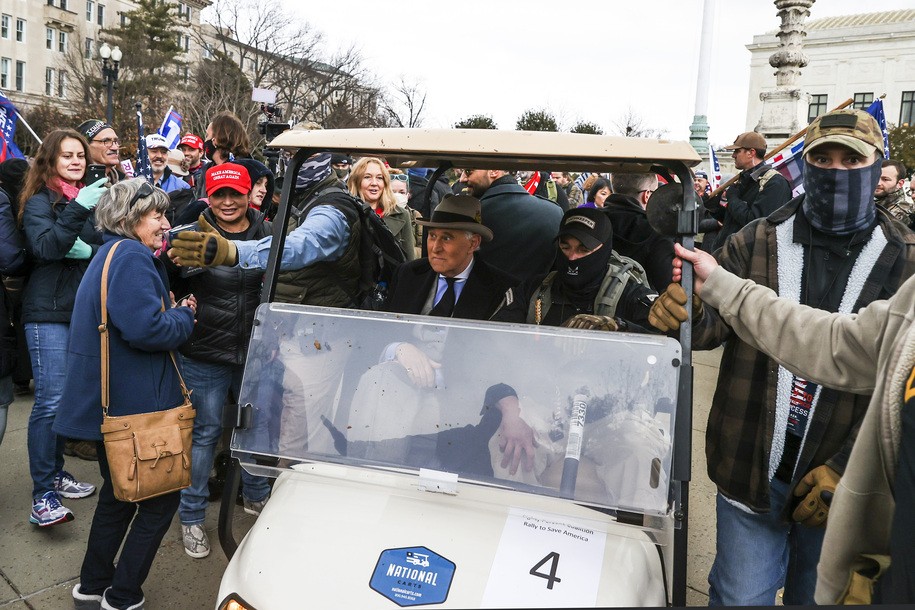 FBI Special Agent Michael Palian fielded questions about the call on Tuesday and described Rhodes as holding nothing back in that meeting, as he rallied 103 members for 126 minutes.

“There’s no such thing as another election in this country or any meaningful sense of the term if you let this stand,” Rhodes said of the 2020 election results in his diatribe to division leaders from North Carolina, Florida, and elsewhere.

Also on the call were defendants Kenneth Harrelson, Jessica Watkins, and Kelly Meggs. Defendant Thomas Caldwell, a retired Navy Intelligence officer, was not on the call. Prosecutors say Caldwell coordinated logistics for a quick reaction force stationed just a boat ride over the Potomac River away.

Trump had to know that he wasn’t being “deserted,” Rhodes pleaded.

He continued: “If the fight comes, let the fight come. Let Antifa go. If they go kinetic on us, then we’ll go kinetic back on them. I’m willing to sacrifice myself for that. Let the fight start there. That would give Trump what he needs, frankly. If things go kinetic, good. If they throw bombs at us, and shoot us, great, because that brings the president his reason and rationale for dropping the Insurrection Act. We want him to declare an insurrection and to call us up as the militia.”

But they would need to “do it smart” Rhodes added. “Let’s do it while President Trump is still commander in chief,” he urged.

Attorneys for the Oath Keepers now on trial argue their clients were not part of an organized conspiracy to stop the transfer of power. Instead, they contend the defendants only showed up in D.C. on Jan. 6 to serve as a “peacekeeping force” against elements they deigned dangerous. Those elements included supporters of the Black Lives Matter movement and advocates of the antifascist, or “antifa,” ideology, defense attorneys said Tuesday.

Though Rhodes and co-defendants Kelly Meggs, Kenneth Harrelson, Thomas Caldwell, and Jessica Watkins argue that all of their efforts, conversations, and meetings were only done in preparation for an event they weren’t ultimately certain would happen, prosecutors point to this secretly recorded meeting as strong evidence that the group was dedicated to ratcheting up tensions to the point of committing sedition.

Agents did not call the tipster in for an extended interview at that time. The same person resubmitted the same tip again in March 2021 but this time, gave the FBI a copy of the recorded teleconference meeting. Then came an interview.

Under cross-examination, Linder asked Palian if he thought the Nov. 9 meeting was actually about that year’s impending Million MAGA March in Washington slated for Nov. 14.

Jan. 6 was not expressly mentioned on the Nov. 9 call, Linder said.

Palian conceded, saying it sounded like the discussion was related in part to the Nov. 14 rally.

Trump would not announce his “wild” rally at the Ellipse for Jan. 6 until Dec. 19.

But prosecutors argue that Oath Keepers didn’t need to reference Jan. 6 specifically during the Nov. 9 teleconference.

In one of the Nov. 5 texts to Oath Keepers, Rhodes wrote: “We aren’t getting through this without a civil war.”

By the time of this Nov. 5 text, Racokzy said, a date for the Million MAGA March had not even been set yet. Election Day was Nov. 3. Trump refused to concede on Nov. 4. The election was called by most news networks for now-President Joe Biden by Nov. 7.

“The final defense is us and our rifles,” Rhodes wrote in a text dated Nov. 7. “Trump has a duty to stand but so far, hasn’t. As Roger Stone said, Trump has one last chance, right now, to stand. But he will need us and our rifles too. But will he FINALLY act? Only if WE act and call on him to lead us.” [Emphasis original]

David Fischer, the attorney for defendant Thomas Caldwell, spent much of the second trial day casting a fiercely skeptical eye on the integrity of the FBI’s investigation of the Oath Keepers and its subsequent indictments in the sedition case.

Caldwell, Fischer said, was not even a dues-paying member of the Oath Keepers. Didn’t Palian find that out?

Palian said Caldwell didn’t need to pay dues to be part of the group.

Fischer presented Palian with a hypothetical that quickly backfired.

So, Fischer said, what about a person who does not pay dues to a group like the National Rifle Association? Could they be considered a member of the NRA if they don’t pay to be a part of it?

“I don’t think $50 determines whether somebody’s a member of an organization,” Palian said. “It costs $0 to join a gang and you can be a member of a gang without paying any money.”

Fischer kept at it.

Was the FBI seriously suggesting that this disabled veteran was able to storm the Capitol when he could barely stand for long periods of time?

Palian was quick to tell Fischer that at a minimum, Caldwell had the strength to coordinate the quick reaction force team and arrange for a meeting of Oath Keepers at his farm in rural Virginia.

Redirect by the prosecution is expected to continue with Palian on Thursday. Courts will be closed in observance of Yom Kippur on Wednesday.

If convicted of seditious conspiracy, Rhodes and his co-defendants face up to 20 years in prison. The crime is rarely prosecuted and when it is, it is often unsuccessful.

Prosecutors have described this case as different from others before it, however. The extensive evidence collected by the Justice Department, they say, shows the defendant’s intent clearly.

When court resumes on Thursday, it is expected that a privilege issue will need to be resolved. After jurors left for the day, assistant U.S. Attorney Jeffrey Nestler told presiding U.S. District Judge Amit Mehta that the prosecution uncovered a Dec. 10, 2020 message that was once thought to be privileged when filter agents first reviewed it.

But new information has emerged recently, Nestler said and the Justice Department has determined that the privilege over that message may not have been properly applied.

Mehta reviewed the message from the bench and said it was a text from Kellye SoRelle, a Texas-based attorney who has represented the Oath Keepers network before.

“It is not a conversation seeking legal advice,” Mehta said as his eyes skimmed over the record.

Linder could object to the text being admitted when court resumes Thursday,

SoRelle was arrested in Junction, Texas, in September and was charged with conspiracy, obstruction of a federal proceeding, tampering with documents, and trespassing in a restricted building.

She appeared unrepentant after her arrest and took up a mantle of persecution on Twitter, writing:

Lesson learned. Lie, never tell the truth and comply with the lockdowns and bow to the oligarchs.