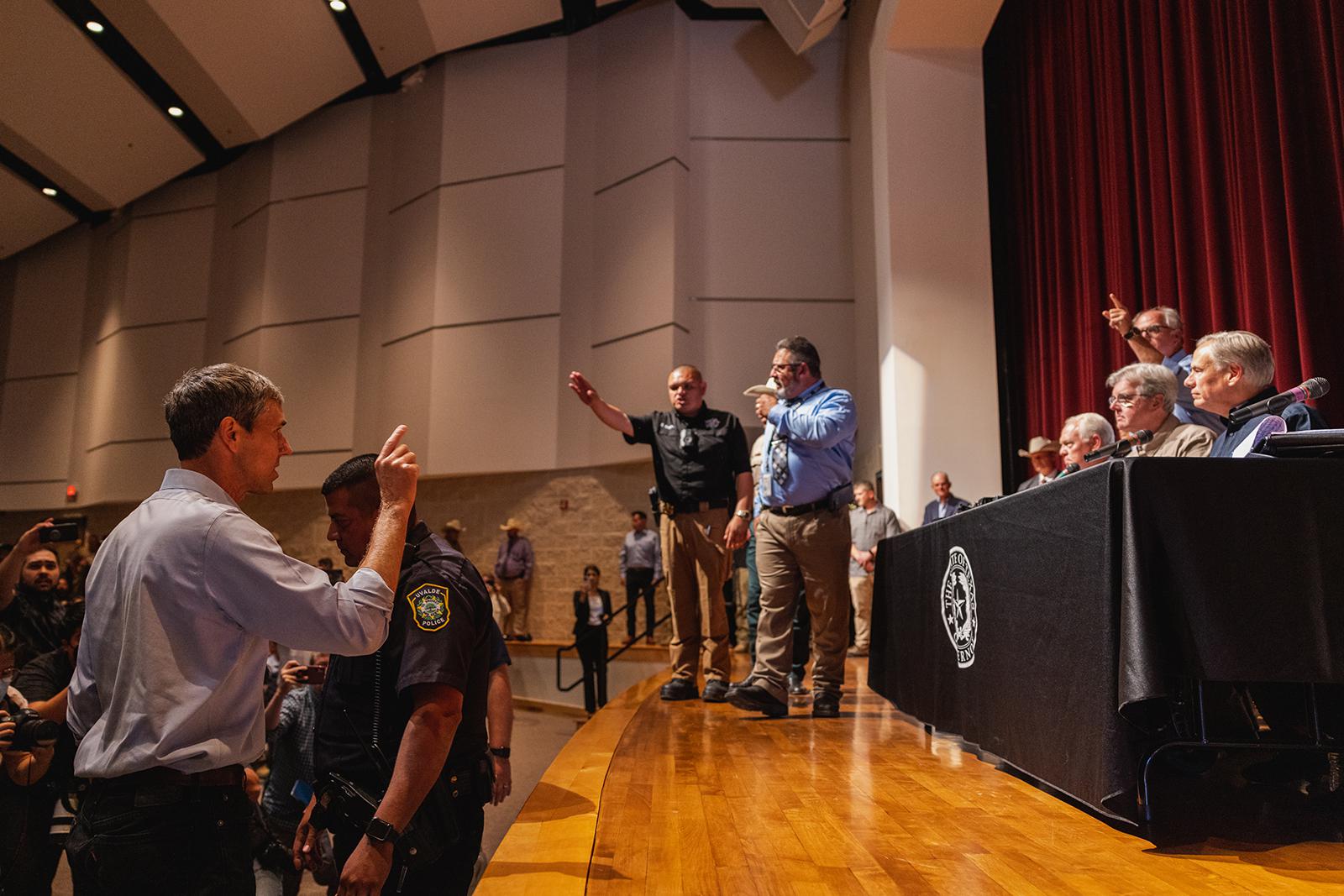 The last time Gov. Greg Abbott and Beto O’Rourke were in the same room, the two-term Republican incumbent didn’t even bother looking his Democratic challenger in the eye.

When O’Rourke
crashed a press conference at a high school auditorium in Uvalde
four months ago, blasting Abbott for “doing nothing” in the wake of another horrific mass shooting, it might have been the high point for the former El Paso congressman’s campaign, even if Uvalde Mayor Don McLaughlin thought it was pretty low at the time: “I can’t believe you’re a sick son of a bitch that would come to a deal like this to make a political issue,” the mayor yelled.

After that moment, a video of which became viral, polls

narrowed to within five percentage points
, a sign that the public might finally be fed up with Abbott’s trite statements of sympathy and Second Amendment fealty after 19 children and two teachers were senselessly murdered at Robb Elementary School.

O’Rourke’s dramatic stand in Uvalde presented a fascinating contrast in leadership styles from Abbott, who appeared stoic, dispassionate, and completely unbothered by this righteous agitator seething with anger and frustration.

Tonight, O’Rourke will have a far more appropriate venue to make his points, and Abbott won’t be able to ignore him when the two finally face off for their one and only debate at the University of Texas Rio Grande Valley in Edinburg.

It’s likely O’Rourke’s last and best chance to make a case for himself in the gubernatorial race as recent polls have shown him trailing in ever-wider margins.

Abbott will have to stay on message
—
migrants! migrants! migrants! — avoid any embarrassing slip-ups, and deftly navigate any topics — ahem, abortion — where he is especially vulnerable. It’s the debate version of the prevent defense: don’t give up any big plays.

The stakes are far higher for O’Rourke. He has stumbled on the debate stage in the past, both during his 2018 Senate race and his short-lived presidential run in 2020. He thrives in off-the-cuff moments where he can make emotional appeals to an audience. Without the energy of a crowd behind him — Abbott reportedly
insisted on an empty room
— O’Rourke will have to figure out a way to stand out in a more scripted, hour-long format.

We’d like to hear from O’Rourke how he would govern from a position of weakness — what can he actually get done in a state where Republicans will retain control of the state Legislature? How would he work with a hostile leader of the state Senate if Lt. Gov. Dan Patrick is re-elected? Can he prove he is more than the flash in the pan Democratic White Knight whose national ambitions got the better of him?

Yet the debate is also a unique opportunity to hold Abbott accountable on several crucial issues.

There was a time when gun rights looked to be a major weak spot for O’Rourke. During his ill-fated presidential run in 2020, he infamously
gave an unapologetic defense of his proposal to mandate buybacks of assault weapons
. Then the Robb Elementary School massacre happened, putting Abbott on the defensive. Suddenly, even a notoriously intransigent Congress was moved to do something on gun control. Abbott has dodged a bare minimum measure that 71 percent of Texans support: raising the minimum age to purchase assault-style weapons from 18 to 21, reasoning that the Supreme Court might overturn it. Will Abbott break from his party’s thralldom to the NRA and show a willingness to enact a reasonable gun control law? Will O’Rourke’s past comments continue to haunt him? Anyone who knows Texas politics can take a good guess, but debates can sometimes surprise.

Abortion will also likely be a major topic. The ripple effects from the Supreme Court’s seismic decision to overturn Roe v. Wade have forced something of a reckoning on Abbott’s decision to sign the most restrictive abortion law in the nation. Anti-abortion candidates are backtracking on their support for an unequivocal abortion ban,
including some Texas Republicans
, yet Abbott has so far remained steadfast that not even the health of the mother or instances of rape and incest will alter his stance. Can O’Rourke pin Abbott down and show voters that his absolutist anti-abortion position is
out of step with both the general public
and members of his own party?

O’Rourke has hammered Abbott for months over his management of the electric grid. When the grid began to wobble after a May heat wave that led to energy conservation notices, he wrote on Twitter that “the governor of the ninth-largest economy on earth — the

energy capital of the world — can’t guarantee the power will stay on tomorrow.” Well, so far, at least, the lights have stayed on. While we believe Abbott and state lawmakers did not go far enough in addressing the grid’s vulnerabilities — to say nothing of his refusal to even investigate
the profits gas pipeline companies made while we all froze
— does the fact that we survived the summer rob O’Rourke of a key attack point?

Finally, at a time when Abbott is in a tit-for-tat with Florida Gov. Ron DeSantis on who can out-stunt the other on immigration, O’Rourke has a chance to expose the cruelty underpinning the governor’s policies. Abbott has proven he is uninterested in actually solving the vexing border problems. He’s more interested in expensive theatrics such as his $4 billion Operation Lone Star initiative to construct a border wall and send thousands of National Guard members to patrol the border. The return on that investment has been abysmal. The number of migrants officials encounter at the Texas-Mexico border is
higher today than it was before the operation began
.

Yet simply pointing out Abbott’s failures isn’t enough. Most Texans still believe that
Abbott is better equipped to handle the situation at the border
. O’Rourke will have to show that he has a better plan to both help border communities dealing with an overflow of migrants, while maintaining some semblance of border security.

It’s a tall task to try and win an election in an hour-long debate, particularly one scheduled, in time-honored tradition, at a time when many Texans would rather take in Friday night lights than Friday night political snipes. Perhaps just battling Abbott to a draw will give O’Rourke enough breathing room to try and win the ground game in the run-up to early voting on Oct. 24. But there’s no bigger platform than the debate stage, with millions of Texans watching, either live or later online.

in this hyper-polarized climate is that most people already have their minds made up. A recent poll — which showed Abbott leading by seven percentage points — found virtually no likely voters who were undecided. Tonight, the onus is on O’Rourke to change voters’ minds.