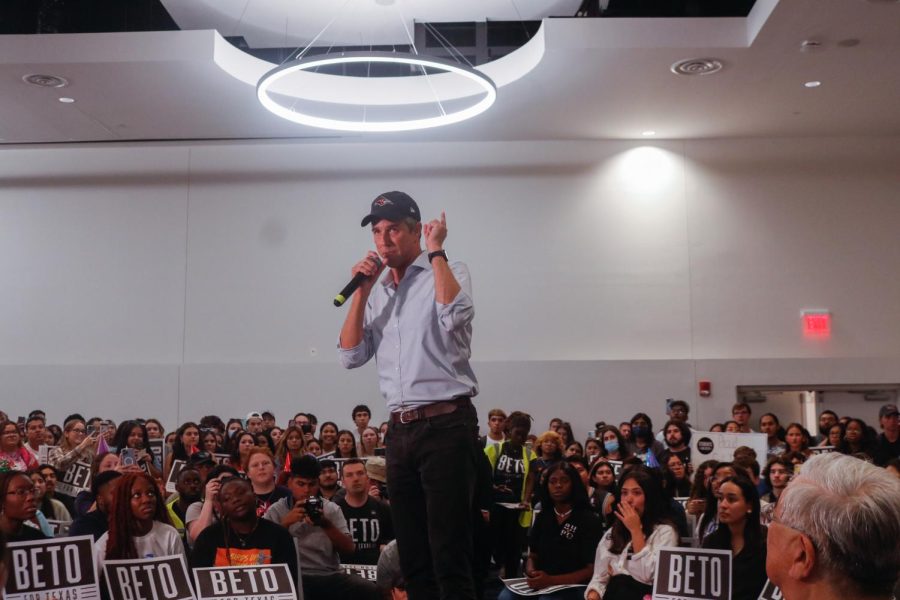 On Sept. 26, gubernatorial candidate Beto O’Rourke made a stop at UTSA’s Main Campus in the HEB Student Union for the first day of his statewide college tour. UTSA was O’Rourke’s second stop on the tour immediately following a stop at the University of Texas Austin. Within the next week, O’Rourke will be making stops at 15 college campuses across the state, including schools such as Baylor University and the University of North Texas. The main focus of O’Rourke’s tour is to inspire young voters and to inform students on pressing issues such as gun control, reproductive freedom, education and civil rights.

O’Rourke opened his speech commenting on his prior visits to UTSA during his senatorial campaign in 2018 and the resulting voter turnout of those midterm elections.

“Four years ago in 2018, we visited … college campuses all over that state of Texas. And the biggest turnout no matter where we went was right here at UTSA,” O’Rourke said. “You all led the way in 2018 [for] the largest voter turnout that we’ve seen in the state of Texas since 1970. Young voters in that year … turned out at a rate of 500% over where they turned out the last midterm.”

With high hopes, O’Rourke discussed some of his main campaign topics and how he believes they will lead to him being elected in November.

“This is how I know we’re gonna win,” O’Rourke said. “Because we’re fighting for every woman to make her own decisions about her own body … because we prioritize the lives of our kids over the interests of the NRA. We’re going to win because we have the backs of our public school educators.”

O’Rourke discussed the changes in voter ID laws and the recent closing of polling stations within the state of Texas.

“We’re going to make sure we get this democracy back nowhere … in this country today is the right to vote [is] under greater attack than it is right now … in the state of Texas,” O’Rourke said. “In this state 750 polling places have been closed down, [which is] twice the number of the … closest state.”

O’Rourke voiced his disdain for last month’s abortion legislation, which followed the overturning of Roe v. Wade by the Supreme Court.

“It has been one month since the most extreme abortion ban in the country, not only did it ban abortion beginning at conception [and] with no exceptions for rape and no exceptions for incest,” O’Rourke said. “We live in a state that has one of the worst rates of maternal mortality in the developed world. Today [it is] three times as deadly for black women as it is for white women [to give birth] in the state of Texas.”

“It has been nearly 18 weeks since 19 children and their two beautiful teachers were slaughtered in their … classroom in Uvalde, Texas,” O’Rourke said. “18 weeks and the governor has not done a single thing … to make sure our brothers and sisters in those classrooms across Texas do not meet the same fate as those children in Uvalde. Even though we know the answers are in front of us, whether that’s a universal background check [or] a red flag law.”

“It did 10 billion dollars worth of damage to people’s homes and apartments,” O’Rourke said. “Here’s the kicker and the killer, 700 of our fellow Texans lost their lives … 11 billion dollars was taken from us while we were freezing in our homes… and the grid is still not fixed.”

“Here’s what we do, when we win, not only will we weatherize and winterize every part of the grid, we’re going to connect ERCOT to the national grid.”

O’Rourke closed his speech with a comment on voter suppression and his hopes for securing the votes of marginalized groups.

“I promise you, I will put you on the doors of those who are targeted for suppression and intimidation, the very people who have been disenfranchised and drained, driven and drawn out of this democracy,” O’Rourke said. “On the night of November 8, there’ll be some pretty profound, powerful, political, poetic justice. When we make those who were drawn out the very margin of victory, we win this election.”