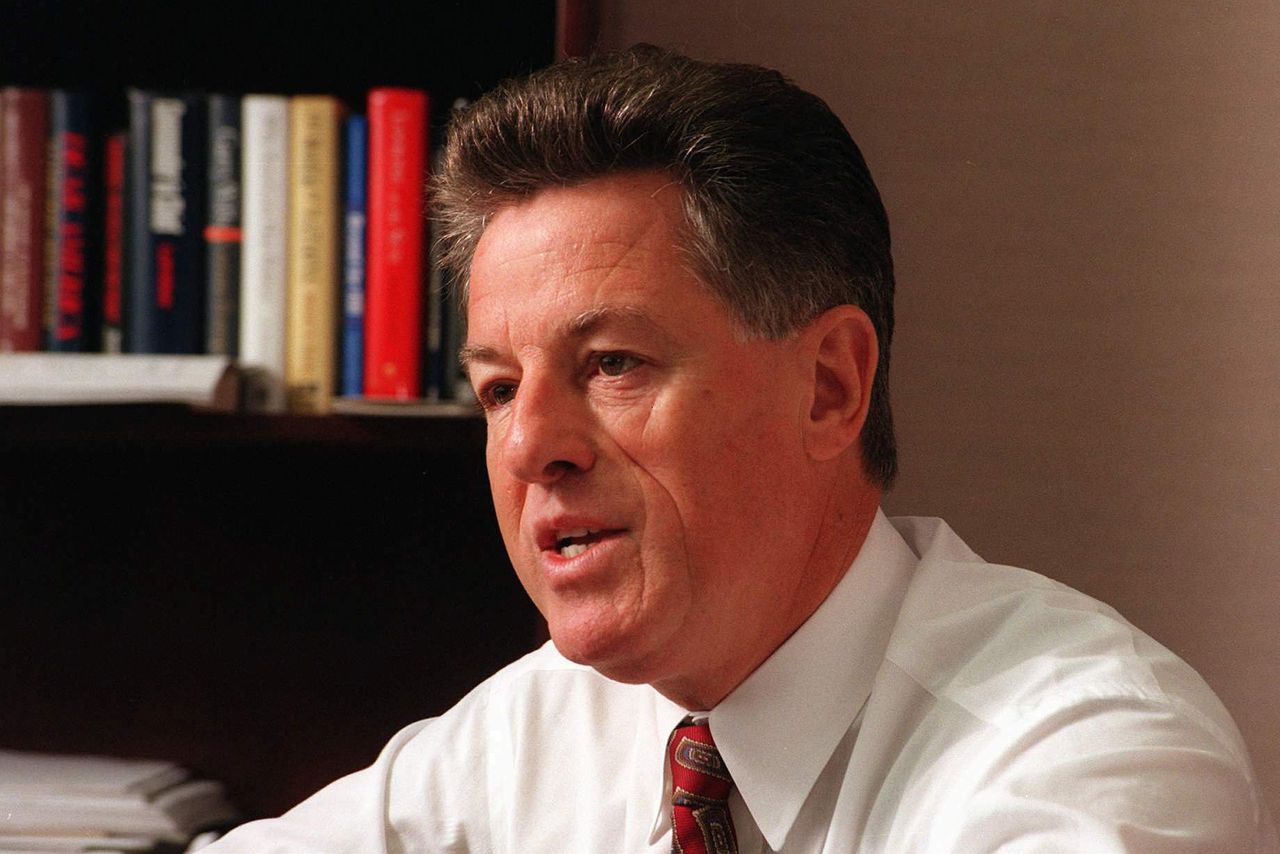 Former Gov. Jim Florio, a pugnacious Democrat whose landmark initiatives on gun control and the environment endured decades after angry New Jersey voters denied him a second term because of his tax increases, died Sunday.

As a congressman from south Jersey, Florio authored the nation’s Superfund law to clean up heavily polluted sites that plagued the Garden State.

Later, his frenetic four years as governor from 1990-94 were best known for the voter revolt against his $2.8 billion tax increase. But they also featured big moves on big issues, including the nation’s toughest ban on assault weapons.

Gov. Phil Murphy on Monday described Florio as “a fighter who never backed down” and announced he will sign an executive order directing state flags in New Jersey to fly at half-staff in his honor.

“He was a leader who cared more about the future of New Jersey than his own political fortunes,” Murphy said in a statement. “And he was also a friend whose kind counsel was invaluable to me and countless others across our state. Our communities are cleaner today because of the environmental efforts he championed in Congress. And our streets are safer today because of his dogged effort to enact and defend our state’s assault-weapons ban, which remains the law to this day.”

“More than anything, Governor Florio showed that legacies are built by doing the right things,” he added.

When he inducted Florio into the New Jersey Hall of Fame in 2014, former state Assembly Speaker Joseph Roberts said the former governor’s life is “truly an inspiration and is also truly a profile in courage.”

“His public career … had its constant themes: vision, ability and integrity. And his willingness to fight the fights no one else would,” Roberts added, saying Florio also crusaded to get more money for poor school children and make corporate polluters pay.

In all, Florio spent 25 years as an elected official in New Jersey. And his successful 1989 campaign for governor was bookended by losses in two of the closest gubernatorial races the state has ever seen.

Florio was born and raised in Brooklyn but graduated from Trenton State College — now the College of New Jersey — and received his law degree from Rutgers-Camden.

He was an amateur boxer while in the Navy in the late 1950s, compiling a record of 12-3 as a middleweight. Florio kept a reminder of his pugilistic career on his face ever since: His left cheekbone was left sunken because of a punch he took. (He is also the only former governor in the New Jersey Boxing Hall of Fame.)

Florio entered government as the assistant city attorney for the city Camden. Later, he served in the New Jersey Assembly, representing portions of Camden County from 1969 to 1975.

That’s when he moved to Congress. Florio was elected to represent south Jersey’s 1st congressional district in the U.S. House of Representatives in 1974. He held the seat until becoming governor in 1990.

In addition to authoring the Superfund law to clean up toxic sites, he presided over legislation on the environment and transportation, including measures boosting Amtrak. He also wrote the law to save the country’s freight railroads.

Florio ran for governor the first of three times in 1977, when he unsuccessfully challenged Gov. Brendan Byrne for the Democratic nomination.

He then lost the election to succeed Byrne in 1981, when he fell to Republican Tom Kean by a mere 1,797 votes — the tightest gubernatorial race in state history.

How tough was the race, which wasn’t settled until recounts that lasted weeks were finished? Florio said the campaign took a lot out of him: “I went from 170 pounds to 152 pounds.”

Florio declined to challenge Kean in 1985, but his third run at the governor’s office was the charm. He thrashed Republican congressman Jim Courter in 1989 to succeed Kean as governor.

Each issue provoked a fight.

Allstate threatened to leave New Jersey over his auto insurance reforms, prompting a rare public flash of humor from the self-described policy wonk: “They call themselves the ‘good hands’ people,” Florio said. “The question is, which part of our anatomy do they have their good hands around?” (He insisted he meant the neck.)

The National Rifle Association went after Florio for his gun legislation. But he declared that “battlefield weapons have no use on our streets or in our cities” when he signed the law in 1990.

Each group held big Statehouse rallies, but none was bigger than the one staged to protest Florio’s tax increases.

Though he pledged no new taxes during his campaign, Florio was hampered by a big state budget deficit in 1991 and the country was struggling with a recession. He also wanted to increase school funding. Florio convinced fellow Democrats in the state Legislature to hike both the sales and income taxes.

A taxpayer revolt ensued. Florio was hammered on conservative talk radio. And midway through his term, Republicans took over the Legislature for the first time in two decades.

Though he worked with Republicans on other big issues and nearly every other state also raised taxes in the following years, Florio became nationally known for the voter revolt.

The Democrat found himself darkly joking that with all those bumper stickers, “visitors to New Jersey think my first name is Dump.”

But he didn’t come back all the way, losing to Republican Christie Whitman by only 26,000 votes after a hard-fought campaign.

Whitman remembered Florio on Monday as “an American patriot who put principles first.”

“He stood by his convictions no matter what the cost, and I am glad we got to know one another better after he left office,” she added.

In his final State of the State speech before leaving office in 1994, Florio said “short-term expediency as a way of avoiding the long-term public interest is, in the ultimate reckoning, a sure-thing losing cause.”

“In the still-early years of the 1990s, pundits speculate as to whether making difficult decisions means you won’t get a second term in office,” he said. “But when this decade is finished, that won’t be the story. When the story of the 90s is written, it will turn out to be the story of men and women who confronted challenges, and rejected easy, patchwork solutions.

“Some of them will win elections and some will lose. But we will all move closer to the world we want for our children if we will but rise above the politics of the moment.”

Florio returned to campaigning in 2000, when he ran for the Democratic nomination for the U.S. Senate seat being vacated by the retiring Frank Lautenberg.

Florio later served as chairman of the New Jersey Pinelands Commission from 2002-05. It was a fitting position: Florio helped craft legislation as a congressman in the 1970s to establish the Pinelands.

Former Gov. Chris Christie recalled that he spoke frequently with Florio during his own time as governor.

“His advice was always thoughtful,” Christie tweeted. “We often disagreed philosophically on the role of government but he was always civil & respectful. I will miss him.”

Doug Steinhardt, the former state Republican Party chairman who was also a partner at Florio’s law firm, had a similar bipartisan tribute.

“Our partnership was a constant reminder to me that ppl can disagree on fundamental tenets of gov’t & politics, but still be civil & still be friends,” Steinhardt tweeted.

U.S. Rep. Donald Norcross, a Democrat who holds Florio’s former seat in Congress, said New Jersey has “lost one of our greatest champions.”

Florio, a Moorestown resident, is survived by his wife, Lucinda Florio.

In 2018, Florio’s autobiography, “Standing on Principle,” was published. It brought him new attention. And with each mass shooting, Florio would be asked about the assault weapon ban he enacted in 1990.

“I’m proof it can be done,” he told the Philadelphia Inquirer in 2018.

In a public event after the book was published, Florio said his mix of book-smart policy wonk and combative politician came from his parents.

“Both my parents were working class people. Neither of them graduated from high school,” Florio said.

“My father was a shipyard worker, industrious, a little rough-edged guy. He was a gambler. I’m not a gambler for money, but I’m a gambler in the sense he was. … I’ve gambled against the odds a lot of times and for different things … My mother was a very meek, but hard, woman. Books — she always had her nose in a book. I’m her, in terms of books.”

Brent Johnson may be reached at bjohnson@njadvancemedia.com. Follow him at @johnsb01.