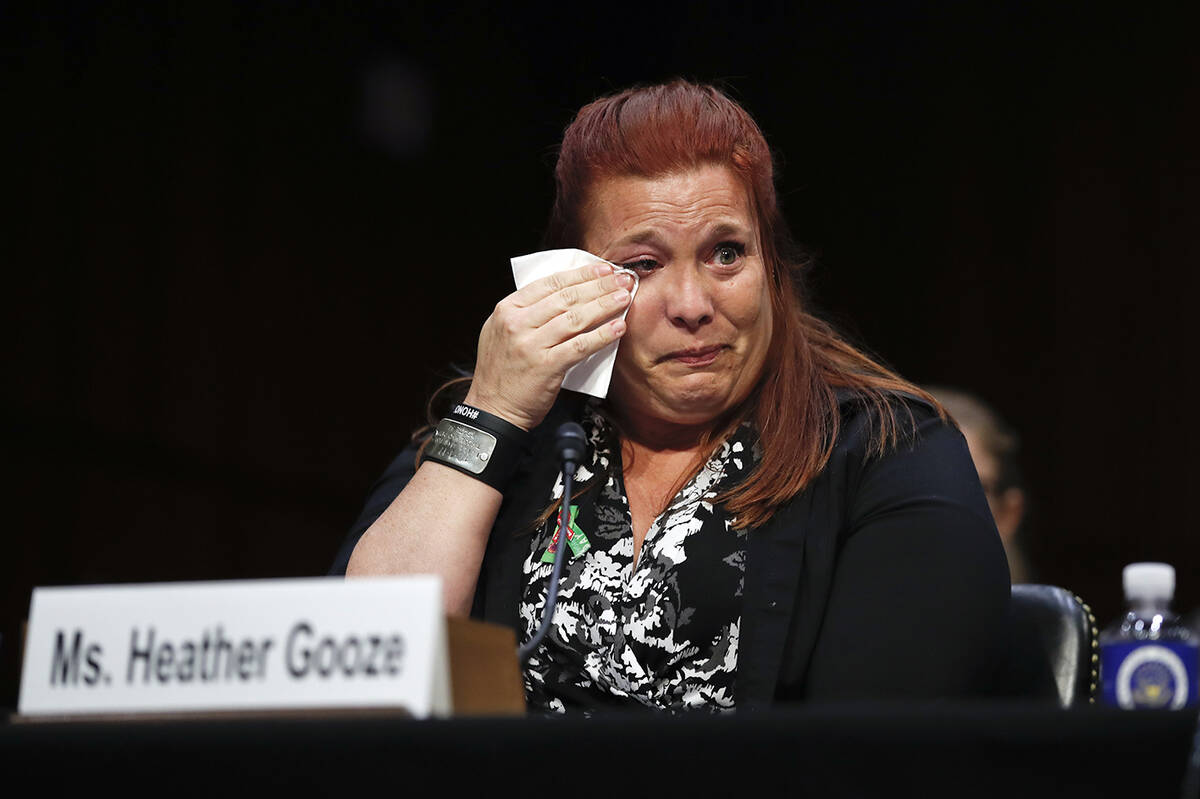 WASHINGTON – After the Oct. 1, 2017, shooting in Las Vegas — the deadliest in American history — bump stocks were banned by a federal agency.

The devices allow semi-automatic rifles to increase the rate of fire to that approaching a more heavily regulated, fully automatic weapon. The Las Vegas gunman attached them to more than a dozen rifles, and was able to fire more than 1,000 rounds in 10 minutes.

But now, as the massacre’s fifth anniversary approaches, that regulation faces aggressive legal challenges that seek to make bump stocks legal once more.

For survivors of the Las Vegas Strip tragedy, including bartender Heather Gooze, 48, the hail of bullets unleashed by a bump-stock-equipped weapon is still vivid.

In the middle of the chaos, Gooze came across Jordan McIldoon, 23, of British Columbia, a concertgoer, who had a fatal gunshot wound. Gooze held him in her arms until he died.

She took a call when McIldoon’s cellphone rang. It was his friend. She had to relay the message of his death. Then she spoke to others, his mother and girlfriend, all complete strangers connected by phone and tragedy.

“It was a war zone,” Gooze recalled of the night.

After the shooting, Gooze testified before the U.S. Senate Judiciary Committee about the experience and the need to ban bump stock devices.

Under the Gun Control Act, it’s illegal for people to own machine guns manufactured after 1986.

The authority of the Bureau of Alcohol, Tobacco, Firearms and Explosives to issue the 2019 regulation that outlawed the devices is at the center of a current legal challenge in a Texas case currently before the New Orleans-based 5th U.S. Circuit Court of Appeals.

The New Civil Liberties Alliance, a nonpartisan civil rights group formed to protect the constitutional rights of individuals from a federal and state agency overreach, is asking the appellate court to reverse the regulatory ruling that made bump stocks illegal.

Any ban should be a decision of the legislative branch of government and not a federal regulatory agency, Richard Samp, senior litigation counsel for the group, told the Review-Journal.

“That’s a decision for Congress to make,” Samp said.

At least eight states, including Nevada, have passed legislative bans on the possession and sale of bump stocks. But a federal law that would codify the regulation to prohibit making, selling or possessing bump stocks remains stalled in Congress due to partisan entrenchment on gun control measures.

U.S. Rep. Dina Titus, D-Nev., whose congressional district includes the site of the Las Vegas mass shooting, filed the Closing the Bump Stock Loophole Act, one of several gun control measures included in the package of reforms that the House passed this year after the May elementary school shooting in Uvalde, Texas.

The Uvalde gunman did not use bump stocks in the attack that killed 19 students and two teachers. Still, the death of grade schoolers created national outrage and calls for action.

Titus said the 60 people who ultimately died in the Las Vegas shooting, and the hundreds injured, were at the front of her mind when she filed her bill and voted on the package of measures that also restricted high-capacity magazines and enhanced background checks and reporting requirements for weapon purchases.

“It is past time for Congress to take action and regulate bump stocks once and for all,” said Adzi Vokhiwa, federal affairs director for Giffords, adding that the legislation “would go a long way in making sure that we never experience a tragedy like the one in Las Vegas again.”

Legal challenges and petitions to the Supreme Court to review and reverse the ban prompted Titus to file the bill to “codify regulation to permanently close off access to these deadly weapons that do not belong in civilian hands.”

Although the House passed the gun control bill, partisan divisions in the Senate forced a compromise that limited the bill mostly to background checks, but left out a prohibition on bump stocks and high-capacity magazines. The Senate, in the wake of the Uvalde shooting, passed the compromise bill that President Joe Biden signed into law.

“We’ve taken important steps to reduce gun violence, including the previous administration’s (regulatory) action to ban bump stocks, and I’ll continue to work with my colleagues on common sense legislation to protect our communities,” U.S. Sen. Catherine Cortez Masto, D-Nev., said in a statement to the Review-Journal.

A House member when the shooting occurred, U.S. Sen. Jacky Rosen, D-Nev., like Cortez Masto, supported bump stock legislation in the House and Senate, but voted for the compromise Senate bill.

Rosen said the compromise was a major step, but she said further action is needed on bump stocks and high-capacity magazines. “Nevada unfortunately knows how deadly these can be,” she said.

He cited his Second Amendment concerns.

Bump stocks were deemed legal after an ATF review during the Obama administration, when manufacturers sought guidance about marketing and sale of their products. That rule remained in effect for nearly a decade.

After the Las Vegas shooting, Trump directed the Justice Department and ATF to review the regulatory language on bump stocks and reclassify the accessories as machine guns to prohibit their possession under the existing Gun Control Act.

Under the current ban, owners of bump stocks must destroy the devices or turn them over to federal law enforcement or face felony charges and punitive fines.

Although the National Rifle Association supported a Trump administration review of the bump stock classification, Executive Director Chris Cox later said the group opposed a ban. The NRA also sought amnesty for gun owners who bought the devices when they were legal.

Since the reclassification, gun rights groups have challenged the ban in federal courts on grounds that the ATF lacked jurisdiction, or that the change violated a constitutional clause protecting citizens from government taking of property.

The New Orleans-based 5th U.S. Circuit Court of Appeals is currently weighing a Texas case challenging the authority of the ATF to review and reclassify the devices. Gun enthusiast Michael Cargill of Texas filed the original lawsuit challenging the reclassification, noting that even with the bump stock, firing the weapon still requires a trigger pull.

In his argument before the 5th Circuit , New Civil Liberties Alliance attorney Samp noted the differing ATF regulations under the Obama and Trump administrations. Samp said, “ATF, under political pressure, rewrote the law.”

“For many years before the Las Vegas mass shooting, ATF took the position that bump stocks are not ‘machine guns’ as defined under federal law,” Samp said. “But in 2018, ATF reversed its position, instantly transforming hundreds of thousands of Americans into felons.”

A decision by the 5th Circuit is expected in three to six months, he said. If judges rule against the ban, it could force the U.S. Supreme Court to resolve the conflicting appeals court rulings. It could also form the basis for legal challenges to state bans on bump stocks.

Unlike those fighting for or against gun rights, the New Civil Liberties Alliance is agnostic on firearms, but instead is focused on the “unlawful power of state and federal agencies.”

For Gooze, the memories linger. The first burst of gunfire struck the crowd. The second hit a grassy area.

“The third set of bullets hit my bar,” she said.

She crawled under a trailer and called her mother to say goodbye.

Gooze says bump stocks are machine guns, designed to kill as many people as possible. She witnessed it. She survived it. And she is still affected by it.

Five years later, Gooze is still a bartender in Las Vegas, and involved in mass shooting victims’ groups. She is frustrated with the partisan arguments over banning bump stocks.

“There is only one reason you would really need a bump stock, and that’s to do a mass shooting,” she said. “I hate that it has become so political. It’s a humanity issue.”