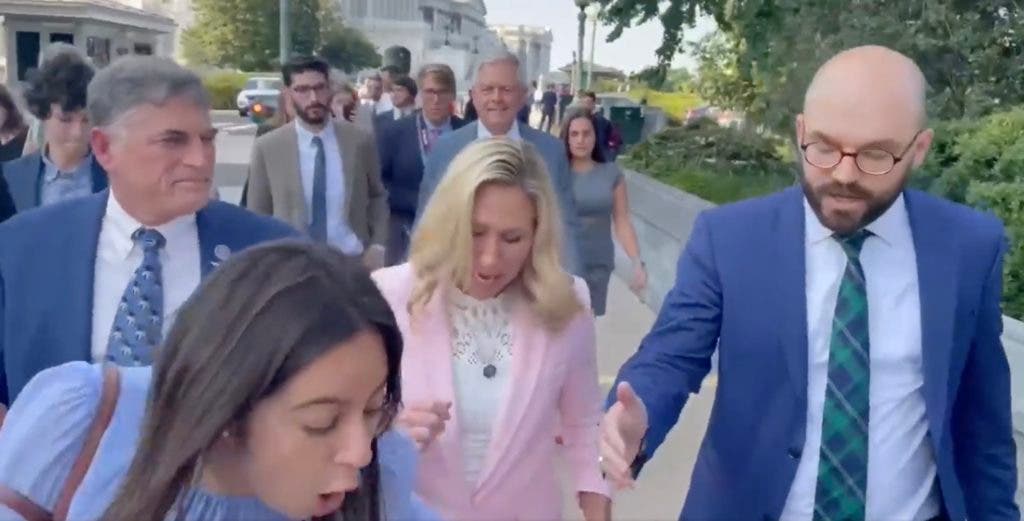 Congresswoman Marjorie Taylor Greene (R-GA) can deny it all she wants, but a new video seems to prove the allegations made by 18-year-old gun legislation reform activist Marianna Pecora who asserts that the NRA-loving legislator physically assaulted her outside the Capitol on Thursday when Pecora and a number of young members of activist group Voters of Tomorrow attempted to engage her on the issue they so vehemently disagreed with her about.

In an interview with The Washington Post yesterday, Pecora explained exactly what happened that led to the Georgia congresswoman unexpectedly and malicously kicking her.

“We were walking sort of as a group because we were having a conversation. I would say we were having what I would consider to be a pretty respectful conversation with her, and there was a group of people so I kind of got pushed forward so I would still fit on the sidewalk. And I was in front of her, and she started kicking me,” Pecora told The Post.

Voters of Tomorrow posted video of the encounter on Twitter to show proof of Pecora’s allegations.

We won’t let her get away with this. pic.twitter.com/NTGspTfunK

Here are some other angles on the encounter that more clearly show Greene’s agressive actions towards Pecora.

Nick Dyer, the Greene spokesman for who told Pecora that “You can’t block members of Congress” while walking by the lawmaker’s side in the video, disputed the veracity of Pecora’s account, saying “There’s literally nothing on video to suggest that Congresswoman Greene did anything.”

Nothing, that is, except the at least three diffent camera angles of the incident.

Pecora told The Washington Post that she was ambulating with the “speed of the group, if not faster. I was trying to get out of the way. … Honestly, everything happened kind of quickly.”

“She sort of kicked the back of my foot, but I think I have a little scuff but nothing serious,” the activist added.

Voters of Tomorrow Deputy Communications Director Jack Lobel told The Post that his organization was discussing the best way to respond to Greene’s assaultive tactics in dealing with people who disagree with her.

“[We’re] talking to our legal team. We’re keeping our options open. Obviously, it’s very inappropriate for anyone to engage in violence, and that does not stop at members of Congress.”

It’s ironic that Rep. Greene would be caught up in a controversy involving a group of activists confronting a political figure in front of the Capitol.

Greene herself notoriously accosted the Parkland, Florida, school shooting survivor David Hogg outside of Congress as an activist before she was elected to office herself.

.@mtgreenee, is this you harassing @davidhogg111 weeks after the Parkland shooting, that my daughter was killed in & he was in? Calling him a coward for ignoring your insanity. I will answer all of your questions in person. Get ready to record again.pic.twitter.com/aQjL74x7kh

Once she was actually a member of Congress, Greene also went after her colleague Representative Alexandria Ocasio-Cortez (D-NY) in the halls of Congress itself.

It’s no surprise then that Greene is trying to weaponize the video footage of her petulant response to the Voters of Tomorrow activists for her own political benefit.

These foolish cowards want the government to take away guns & the rights of parents to defend their children in schools.

You have to be an idiot to think gun control will create a utopian society where criminals disarm themselves and obey the law.

With Greene, it seems that what’s good for the gander is not allowed coming from the goose