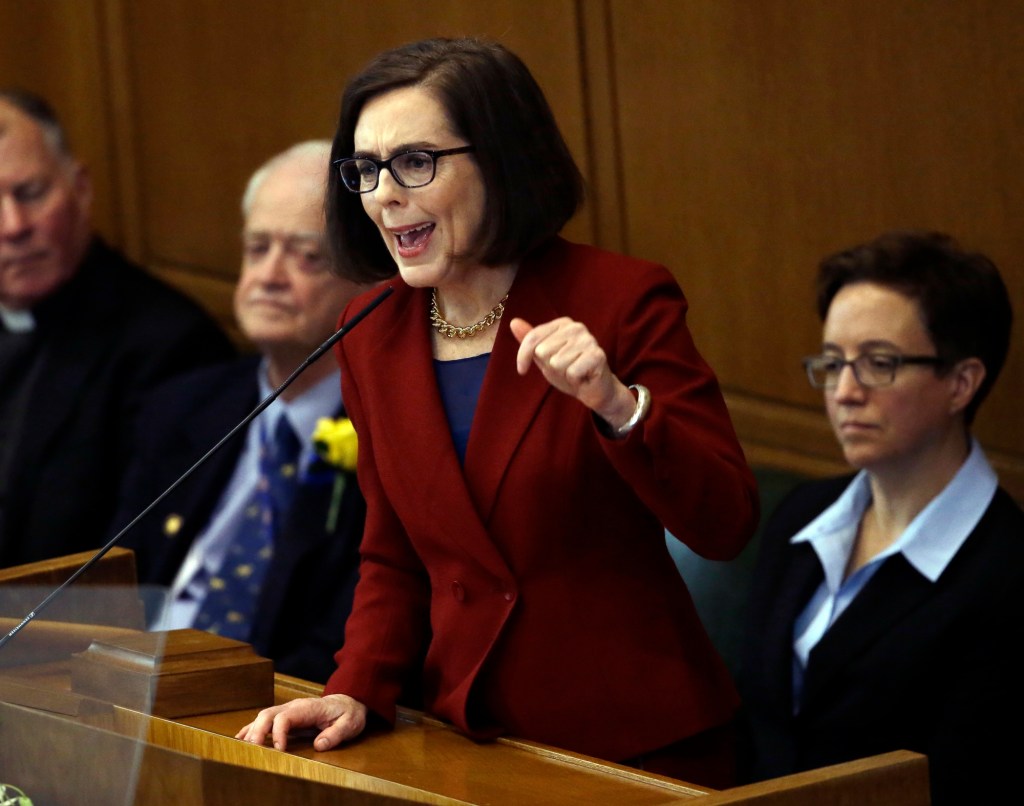 Betsy Johnson is firmly behind the wheel, driving through an urban dystopia of poverty and despair.

“God knows, we need a real solution to the homeless crisis,” she says brusquely. Tent cities and garbage-strewn sidewalks flash by. It will require new leadership, she goes on, and a different type of politics, embracing the best ideas of Democrats and Republicans, without regard to party labels.

“We shouldn’t have to choose,” says Johnson, who is waging an improbably strong bid for Oregon governor, raising the prospect the sapphire-blue state could elect a gun-loving, corporate-hugging, woke-bashing political independent as its next leader.

Or, just as surprising, a Republican, which hasn’t happened since Ronald Reagan was in the White House.

For all the focus on control of the House and Senate, there are 36 gubernatorial contests on the ballot in November. Their import has increased as policies on abortion, guns and other issues increasingly diverge, depending on which party holds power in a given state.

Most of the races aren’t likely to result in a partisan shift. Democrats are poised to flip Maryland and Massachusetts after Republicans nominated Trump loyalists in those blue states.

Republicans hope to oust Democratic incumbents in Kansas, Nevada and Wisconsin, but pickup opportunities in Pennsylvania and Michigan may be out of reach after the GOP nominated far-right conservatives in those swing states.

That has heightened Republican interest in Oregon, which last elected a GOP governor in 1982.

Democrat Tina Kotek, the former speaker of the state House, remains the favorite to win in November, if for no other reason than Democrats and voters who lean their way considerably outnumber Oregon Republicans.

The mathematics of the three-way contest, however, make it quite possible the next governor could be elected with less than 50% support, opening the door for Johnson or the GOP nominee, Christine Drazan, to slip through.

In theory, 35% of the vote could be enough to win and thus end years of Democratic reign along the Left Coast, from Baja California to Canada’s border.

Drazan, the former Republican leader in the state House, is running hard against single-party rule in Salem, the state capital. “We need real leadership and real change to hold the Democrats to account,” Drazan said when the three candidates debated in July.

But the only reason she stands a chance is the presence of Johnson and the hope she might siphon enough votes away from Kotek.

The heir to a timber fortune, Johnson served 20 years in the Legislature, representing rural Oregon as a center-right Democrat before leaving the party and resigning from the state Senate last December to focus on her unaffiliated run for governor.

If ever Oregonians were hungering for something new and different, now would seem the time, with polls showing deep discontent and the incumbent, Democrat Kate Brown, leaving office as one of the least popular governors in America.

“People are very concerned and angry and anxious about the status quo,” said Len Bergstein, a public affairs consultant who’s been involved in Oregon politics since the 1970s.

After deadly wildfires, years of pandemic and weeks of right-vs.-left protests that turned parts of downtown Portland into an armed camp, “There are a lot of people who feel we’ve lost our way,” Bergstein said.

Johnson taps into those frustrations with her TV ad driving through blighted Portland and her disdainful lumping together of the two major parties. “Oregonians are distrustful of the radical right,” she says. “And they are terrified of the progressive left.”

For all the evident frustration, however, Oregon is no Alabama or Arkansas, to name two deeply conservative bastions, and several of Johnson’s positions clearly cut against the state’s political grain.

The proud owner of a Cold War-era machine gun, she responds to the ravages of gun violence by ticking off NRA talking points about increasing school security and boosting mental health services.

The notion of someone beholden to no one, save voters, sweeping in to make bold and dramatic change and rid the political system of its iniquities is a popular and enduring one. Plenty of third-party and independent candidates have tried it. Most end up fizzling.

Johnson has already exceeded expectations with her strong fundraising and solid showing in polls. If she catches a few breaks, she could end up being Oregon’s next governor.