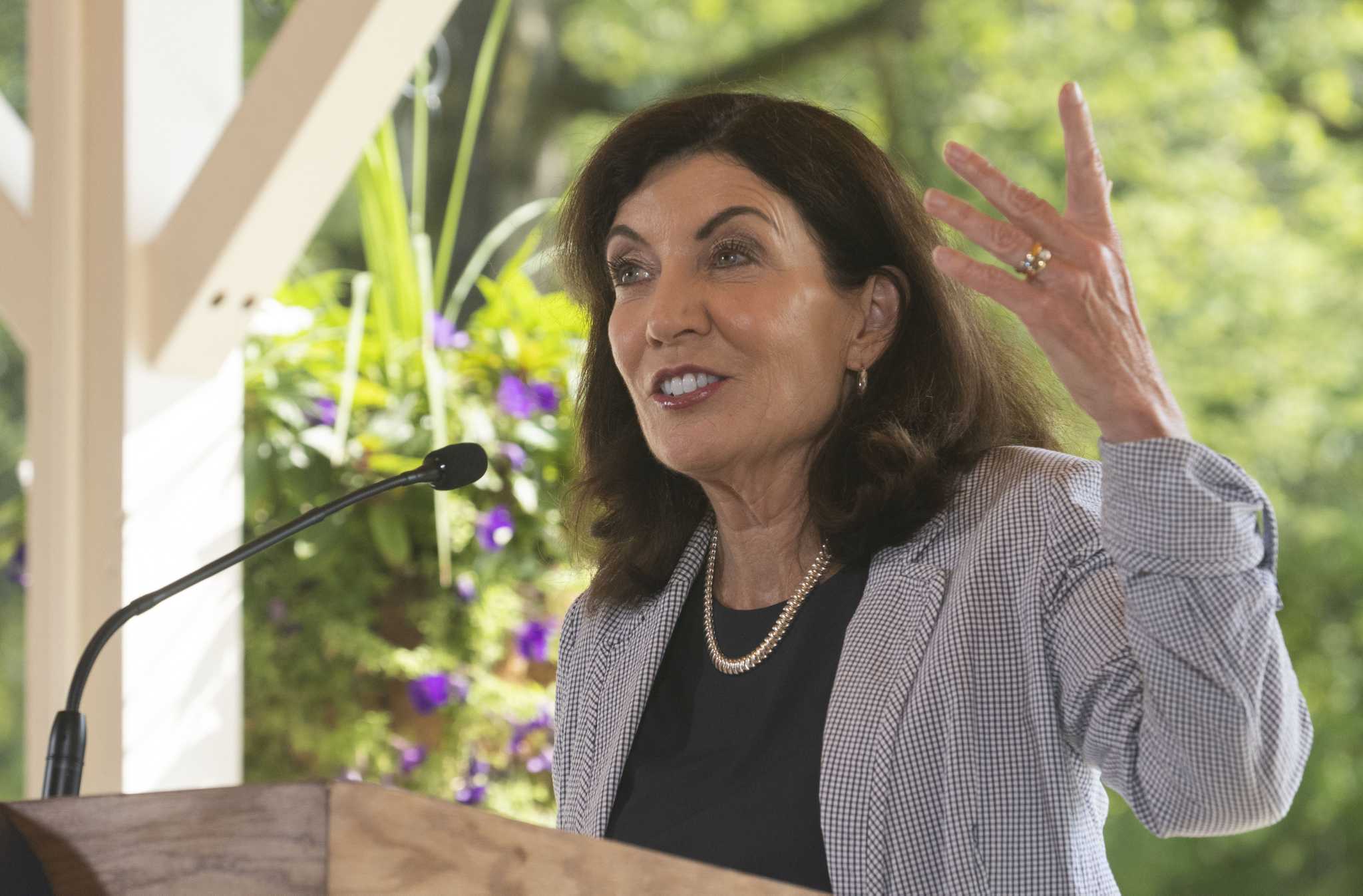 ALBANY — Lee Zeldin was born in East Meadow, in Nassau County, and grew up in nearby Suffolk County. He graduated from the University at Albany and Albany Law School, and he lives in the Suffolk County town of Shirley.

Marc Molinaro, meanwhile, was born in Yonkers and grew up in Dutchess County, where he also attended community college. He lives now in Red Hook.

At the risk of boring you silly, I’m mentioning these basic and rather mundane biographical details because of something Gov. Kathy Hochul said last week at a political rally in Kingston.

“We here to say that the era of Trump and Zeldin and Molinaro — just jump on a bus and head down to Florida where you belong,” the Democrat said. “Get out of town. Get out of town. Because you don’t represent our values. You are not New Yorkers.”

Get out of town. You are not New Yorkers.

Hochul came into office promising to be different in style and tone than her predecessor, but her remarks called to mind Andrew Cuomo’s infamous claim that conservatives who favor gun rights but not abortion rights “have no place in New York.”

Hochul later said that she was only speaking about the three men she named. But given those previously noted biographical details, her implication was clear: Zeldin, the Republican candidate for governor, and Molinaro, who is running for Congress in the Hudson Valley, are not New Yorkers because of the way they think and the views they hold.

Which means, of course, that the many others who hold those views must also not be New Yorkers, no matter where they were born or where they live.

That’s an extraordinary thing for a sitting governor to suggest, or at least it should be. Zeldin, a former state senator elected to Congress in 2014, and Molinaro, the Dutchess County executive since 2012, are backed by significant constituencies. Hochul is supposed to represent those people, too.

Yes, New York is a blue state, generally. But even if Zeldin loses badly in November, he could still be the choice of four out of 10 voters. (In 2020, Trump received 38 percent of New York’s vote.)

All of those people, including the state’s 5.1 million registered Republicans, are not New Yorkers? They should all get out of town? What an incredibly dumb and intolerant thing to say.

Of course, Hochul’s tone was different when she took office a year ago. In her inaugural address, she spoke of a sacred bond of trust with every New Yorker and claimed to have “embraced and internalized the hopes and dreams of 20 million people who share the name New Yorkers.”

She also vowed, at the time, that she would be less divisive than Cuomo and seemed to care about the state’s grim population fall — a decline that will certainly worsen if all the state’s Republicans take the governor’s advice and hop on a bus bound for Tampa.

That was a better version of Hochul. What changed?

The obvious answer is that Hochul wasn’t running for election then, and she is now. And some of you, I suspect, will excuse Hochul’s words as the kind of overheated rhetoric we hear from politicians at rallies, essentially meaningless and therefore forgettable.

But you don’t have to be elderly to remember when political candidates sought to unify voters rather than alienate them, when campaigning politicians sought to smooth the divisions between red and blue America. Those efforts now seem like relics from another age, as common as fax machines and floppy disks.

Like other Democrats, Hochul talks a lot about “defending our democracy.” But democracy requires an acceptance of pluralism and tolerance of opposing viewpoints. Democracy suffers when self-serving politicians divide us into camps and those who disagree as not real New Yorkers or real Americans.

It’s dangerous rhetoric, ultimately, and Hochul knows better. Or at least she should.

It wasn’t all that long ago, after all, when our governor was a conservative Democrat whose pro-gun positions earned her an enthusiastic endorsement from the National Rifle Association. As a member of Congress representing the Buffalo suburbs, she even boasted of being “very conservative in my voting record” and said Republicans “are with me on the issues.”

I suppose we just have to presume that Hochul, born in Buffalo, was not a New Yorker then and became one only when her positions evolved into what she now considers the right way of thinking.

And you can be a New Yorker, too — just as soon as you stop having opinions of your own.