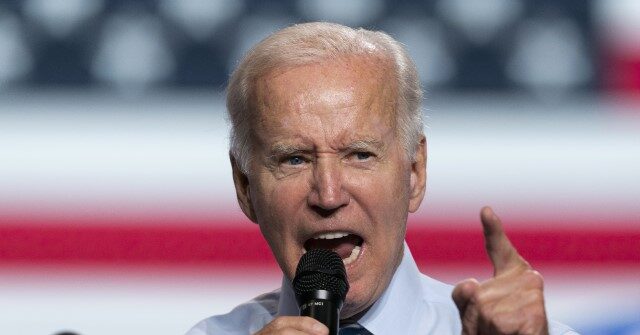 At a rally Thursday night in Rockville, Maryland, Joe Biden said “assault weapons” will be banned if Democrats pick up two more Senate seats in November.

He later added, “If we elect two more senators, we keep the House … we’re going to get a lot of unfinished business done.”

Biden indicated that banning “assault weapons” is part of the Democrats’ unfinished business:

On October 17, 2020, Breitbart News reported that then-Democrat presidential nominee Joe Biden proposed a gun control policy which included a provision requiring that every AR-15 rifle be registered under the National Firearms Act of 1934. Unless there were some form of carve-out, this could mandate that American gun owners pay a $200 federal tax for each AR-15 they own.

At that time, the National Rifle Association’s Andrew Arulanandam told Breitbart News that the “low end” estimate of privately-owned AR-15s in the United States was 18 million. A tax of $200 on 18 million AR-15s meant gun owners could have potentially been required to pay a collective $3.6 billion in taxes, had the Democrats secured the legislation.

An NSSF press release sent to Breitbart News indicated the estimated number of AR/AK-Style firearms in circulation is 24,446,000.

The nation in brief: U.S. drops judge’s obstruction charges
A Senate Race That Shouldn’t Be Close But Is
Former New Jersey Gov. Jim Florio dies at 85
Patrick Bertagna, CEO, MetAlert (formerly GTX Corp), discusses the evolution and rebranding of the Company.
What Does the Philadelphia D.A. Do Now?