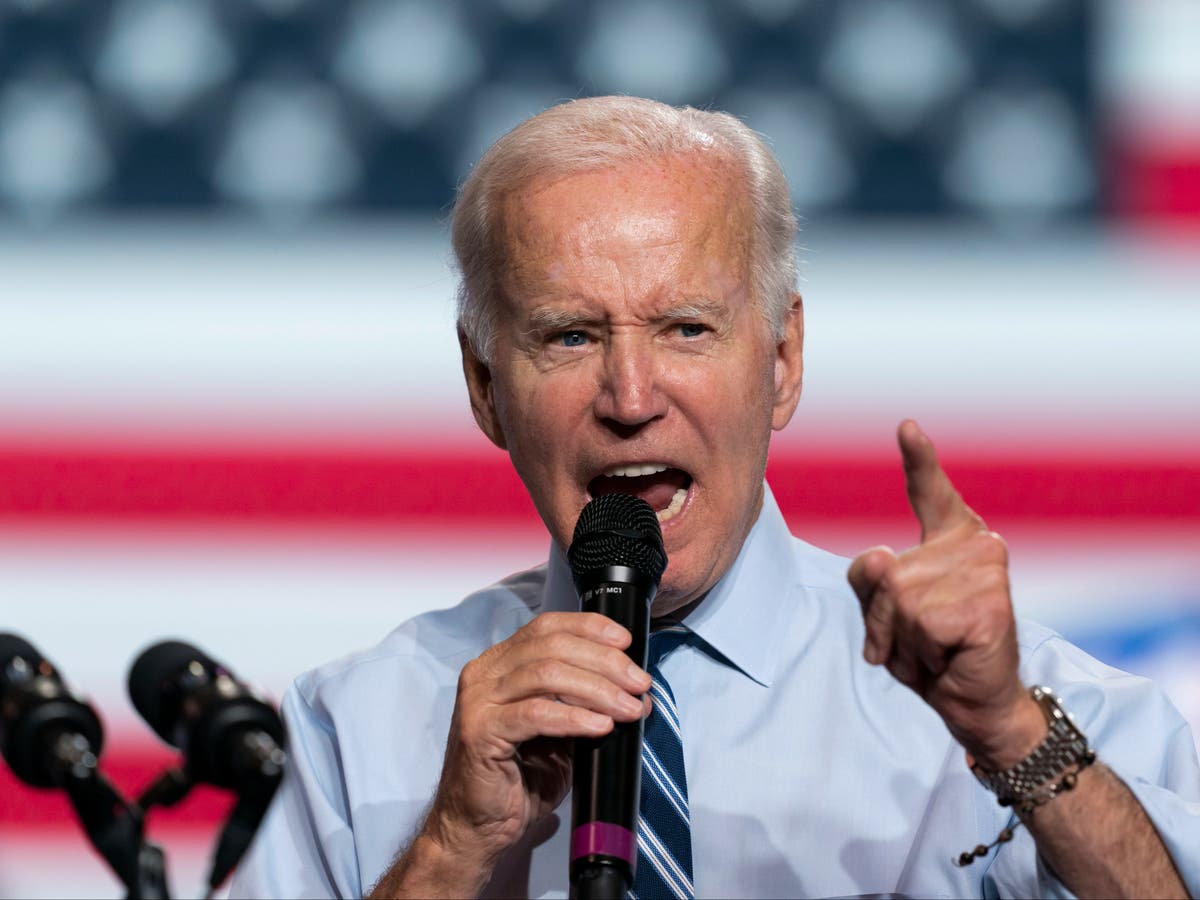 President Joe Biden has pledged to ban assault weapons if the Democrats manage to strengthen their precarious hold over the House of Representatives and Senate at November’s midterm elections.

Speaking at a rally for the Democratic National Committee at Richard Montgomery High School in Rockville, Maryland, on Thursday, Mr Biden stressed the significance of the upcoming vote, just 74 days away.

“Your right to choose is on the ballot this year,” he told the crowd.

He also took the opportunity to hit out at the “extreme MAGA philosophy” of Trumpism, likening it to “semi-fascism” and drawing an unfavourable distinction between traditional “conservative Republicans” and “MAGA Republicans”, saying he did not respect the latter category.

On gun control, Mr Biden invoked the spectre of recent mass shootings and the passage of the Bipartisan Safer Communities Act earlier this summer.

“We took on the NRA [National Rifle Association]. And we beat them,” he said, with some relish.

“We just passed the first significant gun safety legislation in 30 years in this country. And I promise you, we’re not stopping there. I’m determined to ban assault weapons in this country. I did it once before and we will do it again.

“We’re gonna do it for those families in Buffalo, Uvalde, Newtown, El Paso, Parkland, Charleston, Las Vegas, Orlando. I’ve been to almost every one of those places to meet with those parents. We all got to do it.”

The president signed the Bipartisan Safer Communities Act into law on 25 June after it passed the Senate 65-33, following extended talks across the aisle, and then the House 234-193, with 14 Republicans joining their Democrat counterparts to support it.

“This is a monumental day,” he said in the Oval Office as he reached for his pen, adding: “While this bill doesn’t do everything I want, it does include actions I’ve long called for that are going to save lives.”

The act includes provisions to expand federal background checks so that firearms retailers are obliged to examine the juvenile and mental health records of prospective customers aged 18 to 20, closes a so-called “boyfriend” loophole allowing unmarried domestic abusers to own weapons and funds programmes that encourage states to adopt “red flag” laws to block the sale of guns to people suspected of posing a threat to others or themselves.

It does not include an assault weapons ban though, nor does it prohibit the types of high-capacity magazines that have become common tools of mass shooters.

However, Mr Biden has long been a supporter of stricter gun laws and frequently touts his sponsorship of the 1994 crime bill, which included a 10-year ban on many types of military-style weapons, as proof of his anti-gun bona fides.

Speaking in the Rose Garden on 11 July, he cheered the bill masterminded by Democratic senator Chris Murphy of Connecticut and his Texan Republican opposite number John Cornyn and said: “The action we take today is a step designed to make our nation the kind of nation we should be. It’s about the most fundamental of things — the lives of our children, of our loved ones.

“It’s proof that despite the naysayers, we can make meaningful progress on dealing with gun violence.”

The president then found himself heckled and told to “do more” by Manuel Oliver, a father of one of the 17 killed in the massacre at Marjory Stoneman Douglas High School in Parkland, Florida, on 14 February 2018 (Niklas Cruz, the culprit, is currently being sentenced for his crimes and could face the death penalty).

“Success begets success”, Mr Biden replied. “We finally moved that mountain of opposition, obstruction and indifference that stood in the way and stopped every effort of gun safety for 30 years in this nation.

“Now’s the time to galvanise this movement because that’s our duty to the people of this nation.”

His pledge on Thursday night appeared to recommit his party to that goal, the midterms permitting.