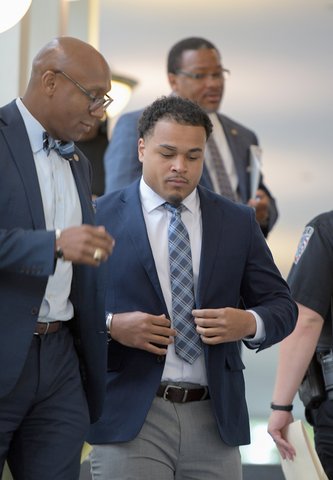 Attorneys questioned potential jurors about prior knowledge or opinions of the case, gun ownership, road rage and race as jury selection began Monday for the trial of William Marcus “Marc” Wilson on felony murder and other charges for the June 2020 shooting death of Haley Hutcheson.

After about 350 Bulloch County residents were summoned as jurors, 101 showed up at 8:30 a.m. for the start of the procedure in Bulloch County Superior Court. The prospective jurors had previously answered written questionnaires. When Judge Ronald K. “Ronnie” Thompson sent the last of the jury pool home around 6:20 p.m. with instructions to return at 8 a.m. Tuesday, the jury’s final makeup remained undetermined, but the prosecutors and defense had asked individual questions of more than 20 potential jurors. Each side could dismiss up to nine jurors through pre-emptory challenges.

Thompson had first met with attorneys in an upstairs courtroom at the Judicial Annex to discuss some pretrial motions before they all went downstairs where the potential jurors were waiting. Thompson swore them in, and they were asked preliminary questions as a group.

By show of hands, all were U.S. citizens, all residents of Bulloch County, all over 18 years old, none convicted felons who had not had their rights restored, none closely related to Wilson, Hutcheson or the attorneys. None responded as having any preformed opinion of the case. So, the only person excused at that point was a sheriff’s deputy who had been included in the jury summons list.

Returning upstairs with the attorneys and sending potential witnesses out of the courtroom, Thompson then had the first dozen potential jurors sent up. He quickly excused two who had medical or dental appointments this week – he said a prepaid vacation could also be a reason – and later another potential juror for a childcare responsibility.

“This trial may stretch into Saturday. We don’t know yet.  But if you’ve got anything of that nature, please raise your hand,” Thompson said.

He had another two jurors brought up to replace the first two excused, and the set of 12 potential jurors were held in the jury room, to be called in one by one and questioned further. But this process took so long with the first juror that Thompson changed the procedure to have the attorneys ask more questions of all 12 as a group. However, that was still followed by individual questions.

“Who has heard something about this case already?” was one question Chief Assistant District Attorney Barclay Black reiterated in various ways to the group and individual jurors. Six of the first 12 acknowledged that they had.

He then followed up, individually, about the sources of what they had heard, whether “a news channel” or newspaper or social media. What he was getting at is that jurors are expected to ignore anything they have heard and base their verdict only on the testimony and evidence presented during the trial.

Black also asked potential jurors if they own a gun. Half of the first dozen people acknowledged being gun owners, as did five or six of the second group, which then included 11 potential jurors.

Wilson’s lead defense attorney, Francys Johnson, asked a different question related to attitudes about guns. Acknowledging that he is a member of the National Rifle Association, or NRA, as well as the NAACP – of which he once served as state president – Johnson asked if these memberships would prejudice any potential jurors against him.

This was related to Johnson’s questioning about “implicit bias” and attitudes toward race.

“I am looking for inclination and bias, and I know that’s a negative word,” he said. “It has a negative connotation; nobody wants to be thought of as biased. But we all have them. I do. I want to know those that would lead you towards conduct that would give Mr. Wilson pause that you might be fair and impartial.”

Johnson asked follow-up questions to individual members of the juror pool about whether they have had racial slurs used against them or had used racial slurs themselves. At least one white man and one white woman said they had been called things like “cracker” and also acknowledged having called Black individuals “n…,” but said this had been years ago and that their attitudes had changed.

Two or three jurors also said they had Confederate flags, or the old Georgia state flag, on objects at their homes or workplaces.  But none said they were members of the Sons of Confederate Veterans or similar organizations, when Johnson asked about that.

He questioned some potential jurors about their knowledge of the killings of Ahmaud Arbery, Breonna Taylor, George Floyd, and more locally, Julian Lewis, and of Black Lives Matter protests held during the  summer  of 2020.

One man asked, “Your Honor, am I on trial here?” after Johnson questioned him about this and some things he had reposted on social media.

Witnesses at earlier hearings testified that Wilson, while driving his car on the bypass around 1 a.m. Sunday, June 14, 2020, fired a handgun and that a bullet struck Hutcheson, 17, in the back of the head as she rode in a pickup truck with four other teenagers from Claxton.

But the defense attorneys have asserted that Wilson, who is biracial, was defending himself and his white then-girlfriend who was in the car with him from a racist attack, including shouting of slurs, throwing of beer cans and aggressive driving, by occupants of the truck.

Wilson, from Sharpsburg but with Statesboro family connections, was 21 when the shooting occurred. Sought by Statesboro police, he returned with his father three days later, turned himself in at the Bulloch County Jail to face charges and also surrendered his handgun.

A grand jury later returned an indictment charging him with one count of felony murder, five counts of aggravated assault and one count of possessing a firearm while committing a felony.