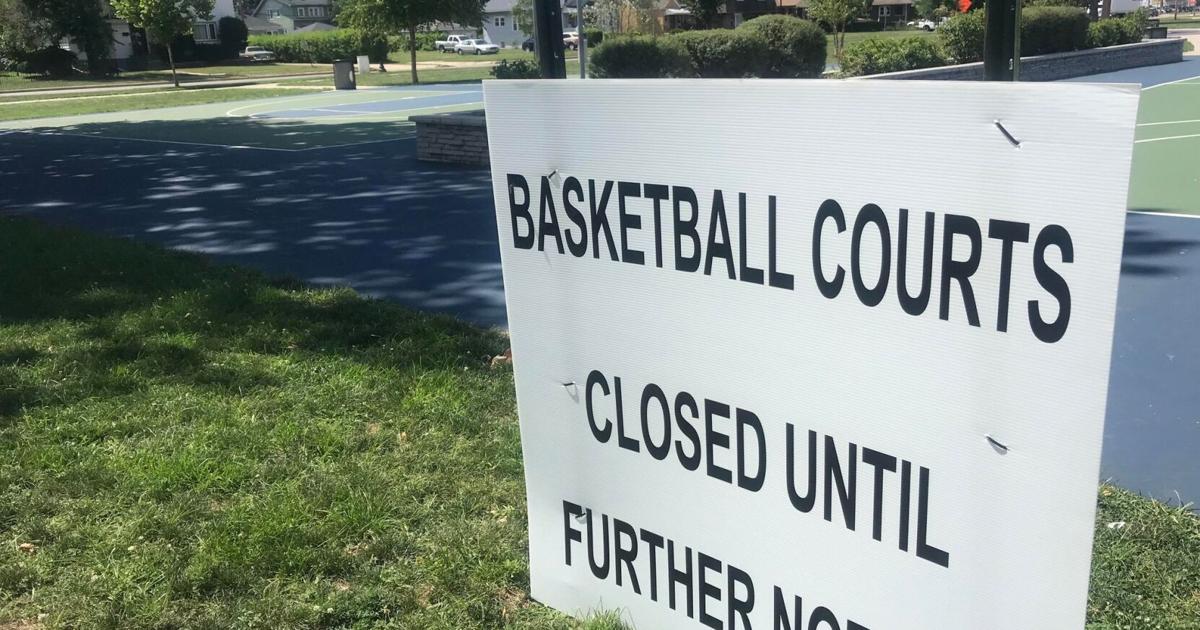 There wasn’t a soul to see at Dr. Martin Luther King Memorial Park in Hammond on Tuesday afternoon, the last day of summer break for students.

The beautifully renovated public park near City Hall would normally be bustling with kids, families and visitors, especially at its pristine basketball courts. Not that day. Not this week. Not for the foreseeable future. The court’s basketball rims have been removed. A sign slam-dunks the mayor’s new decree, “Closed until further notice.”

“That was it for me. Things were getting out of control,” Hammond Mayor Thomas McDermott Jr. told me Tuesday.

Last week, two shootings took place here within three days — one resulting in a fatality and murder charge, the other still under investigation. After the second shooting incident, McDermott made the decision to close the basketball courts indefinitely, telling me he’s been “intentionally vague” about when the park’s most popular amenity will reopen.

“What happened there is unacceptable behavior. We simply can’t look the other way,” McDermott said.

During his long tenure as mayor, he is accustomed to looking at that park on a daily basis when he enters or exits City Hall. This past year or so, he’s become accustomed to having Hoosier voters from across the state now keeping an eye on him.

“I understand that the rest of our state is watching how I govern this situation,” he said, referring to his ongoing statewide campaign against U.S. Sen. Todd Young, R-Ind.

I wouldn’t be surprised if those problematic basketball courts remained closed through Election Day in November.

“Eventually those courts will reopen, but I’m not sure when,” McDermott said.

The mayor has received both praise and condemnation for closing the courts, which attracted a large crowd that often lingered after hours on most summer nights. With school now underway, and Hammond Central High School just a couple of blocks away, more kids will be a presence near that site.

“With both shootings at that park, it wasn’t about not enough police presence,” he said.

On Saturday, just 15 seconds before a 40-year-old man allegedly shot and killed a 39-year-old man at that site, a police car drove past the scene. The exchange was shown on surveillance video, Kellogg said.

Darren A. Ferguson, 40, of Hammond, has been charged with one count of murder in the shooting death of 39-year-old Jullius J. Brooks, who allegedly bullied Ferguson’s 10-year-old son at the park earlier that day, police say.

Kellogg perfectly summed up this tragic situation by noting, “The father went to the park to protect his son, who he now will no longer be able to protect.”

Two primary factors resulted in this deadly outcome, I say — our country’s obsession with guns and our collective problem with conflict resolution.

“There are different avenues of conflict resolution that don’t involve a gun,” said Kellogg, who has more than 25 years of experience as a police officer. “Years ago, it may have been safe to approach a stranger to resolve a conflict. These days, you never know.”

Ferguson could have protected his son by reaching out to police or by removing his son from the park and returning home, but now the father is heading to prison, the son is losing his father, and another gunfire homicide gets added to the books, Kellogg said.

The first of two recent shootings at that park, on Aug. 11, involved suspects who are both teenagers, representing a rising demographic of young criminals in our country. There is a pattern of learned criminal behavior that follows incremental steps: stealing property, committing a burglary, personal robbery, physical assault, gunfire violence.

“They’re not afraid of police or the consequences of their actions,” Kellogg said.

Making it more difficult for police is the new state law, which began July 1, no longer requiring a handgun permit to legally carry, conceal or transport a handgun within the state. “A person MUST NOT be a PROHIBITED PERSON as defined by IC 35-47-2-1.5,” the law states.

Region police officers I’ve spoken with are already frustrated by this law when it comes to providing public safety. Unless they know for a fact that a gun holder is a felon, or a suspect does something for probable cause to detain or arrest, police feel handcuffed.

As one cop told me, “The Indiana legislature is a wholly-owned subsidiary of the NRA, which resulted in this obscene constitutional carry canard.”

Another factor of the gun violence in our Region involves the “Chicagoization of Northwest Indiana,” one police officer said.

The mores, ethics and behaviors from the Chicago metro area are moving into our corner of Indiana because it’s more affordable to live here than in Cook County. “So the people move in with that mentality. Violence and guns are second nature,” he said.

Roughly one-third of the violent crimes in north Lake County cities can be directly tied to criminals with a Chicago history, I’m told. “When we file charges, these perpetrators have an extensive Cook County criminal history,” one cop said.

The majority of criminal arrests in Cook County are deferred prosecution or plea bargained to lesser charges, he said.

In certain neighborhoods in Hammond, for example, longtime residents feel outnumbered and intimidated by outsiders who bring a more dangerous attitude, and more guns, though often purchased in Indiana. It’s a lethal combination, I’m told.

“Those longtime residents are scared to come out at night,” a cop said.

Meanwhile, McDermott was right to temporarily close those courts as the public struggles to regain the soul of Martin Luther King Memorial Park.