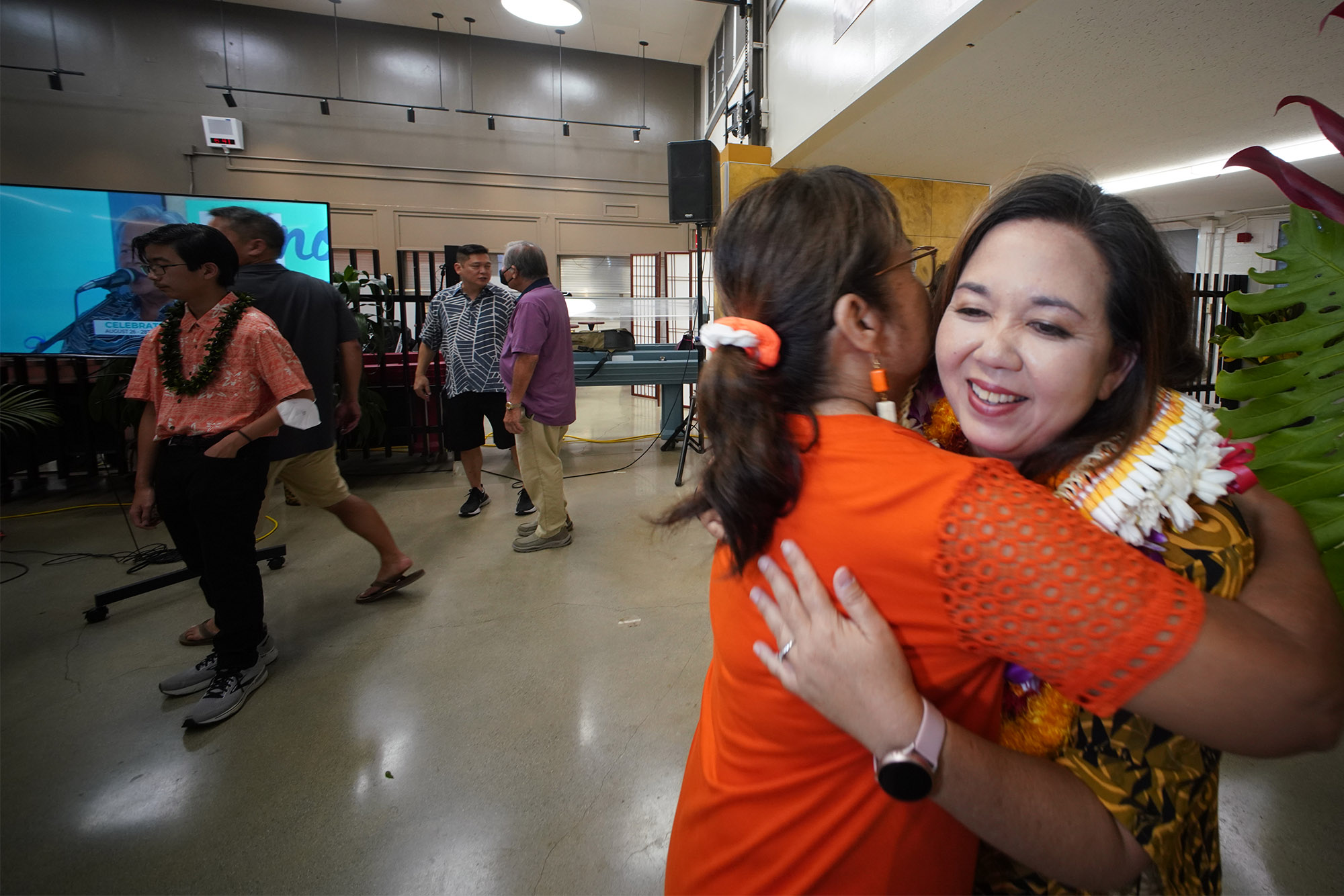 With most of the vote in as returns were released late Saturday night, Tokuda lead Branco 49.8% to 20.9%.

Tokuda has been considered the frontrunner in the race in large part because she has a long political resume, which includes serving as chair of the Senate Ways and Means Committee and running for lieutenant governor in 2018.

Branco, on the other hand, has been in office just two years. He worked as a foreign services agent for the State Department and was elected to his first term in the state House in 2020.

Whoever wins the nomination is most likely the state’s next member of Congress, given Hawaii’s history of electing Democrats.

“Every single day it’s about earning the trust and the support and the votes of the people that I that I would like to represent here in CD2 and Hawaii,” Tokuda told Hawaii News Now after her race was called. “And so for me, it’s a long-term commitment because we’ve got so much work to do, and that starts right now — continuing to go out there, doing what we’ve been doing, meeting with people, listening to people focused on what’s the work going to be that we’re going to do together to make sure that people have hope that they can see a future here for themselves and their children.”

The race has been dominated by negative advertising and the influence of outside money.

A number of mainland organizations, from the political arm of the Congressional Hispanic Caucus and VoteVets to Mainstream Democrats and Web3 Forward — which supports candidates who are friendly to the cryptocurrency industry — dumped more than $1.2 million into the contest in an attempt to elect Branco.

VoteVets and Mainstream Democrats in particular began running attack ads targeting Tokuda over a 2012 endorsement she received from the National Rifle Association.

The groups appeared to be taking cues from Branco, who from the outset of his campaign tried to make that an issue.

He even posted about the endorsement on his website in a manner that encouraged outside groups to pick up on it and spend money on his behalf, explaining which voter groups in Hawaii might be influenced the most by particular types of advertising.

Tokuda, too, benefited from outside money but not nearly to the same level as Branco.

The Congressional Progressive Caucus and Medicare for All PAC, which was founded by caucus chair U.S. Rep. Pramila Jayapal spent about $200,000 for Tokuda.

One of the more surprising aspects of the race is that more candidates did not enter the fray considering it was an open seat.

Akana, a 2020 election denier, has run for federal office before.

Webster is a first time candidate, who describes himself as centrist. For instance, he supports gay marriage, an assault weapons ban and believes that President Joe Biden won the 2020 election.

Alcubilla, who worked as a lawyer for the Legal Aid Society, garnered the support of a number of prominent labor groups, including the Hawaii State Teachers Association and the International Longshore and Warehouse Union.

He also received the backing of Our Hawaii Action, which asked candidates to swear off corporate donations in exchange for political support.

Alcubilla is Case’s first primary challenger since he was elected in 2018. Case is a member of the House Appropriations Committee as well as Natural Resources.

He has been unabashed about his approach to his work, which he admits is moderate, at least when it comes to fiscal policy. Case is a member of the Blue Dog Coalition in Congress, and was one of several centrist Democrats who pushed to have Biden’s Build Back Better agenda pared down.

Schatz faced little competition in the race. His sole challenger in the primary was Steve Tataii, a conflict resolution consultant.

As of Saturday evening, Schatz led Tataii 88% to 6% — a complete landslide.

Tataii did not report raising any money for his campaign and does not have a campaign website.

Schatz is a respected member of the U.S. Senate who has positioned himself on key committees that are important to Hawaii, including Appropriations, Indian Affairs and Foreign Relations. Schatz is currently the chairman of Indian Affairs.

During the campaign he boasted of his ability to shovel federal money into the state and other accomplishments, such as increasing the smoking age to 21 and expanding telehealth services during the Covid-19 pandemic.

According to his own tally, Schatz has secured more than $16 billion for the Aloha State since 2012, when he was first appointed to the position by then-Gov. Neil Abercrombie in the wake of U.S. Sen Dan Inouye’s death.

On the Republican side of the ballot, state Rep. Bob McDermott led newcomer Timothy Dalhouse 33% to 19%.

McDermott is running as a single-issue candidate to bring more attention to the crisis at the Navy’s Red Hill bulk fuel storage facility that sprung a leak last year and sickened thousands of island residents. He says Schatz and the rest of Hawaii’s federal delegation didn’t do enough to address the issue despite knowing for years that it was a hazard.

Dalhouse is a first-time candidate who recently moved to the Big Island. He’s a former Marine and business owner who invested $150,000 of his own money into his campaign.