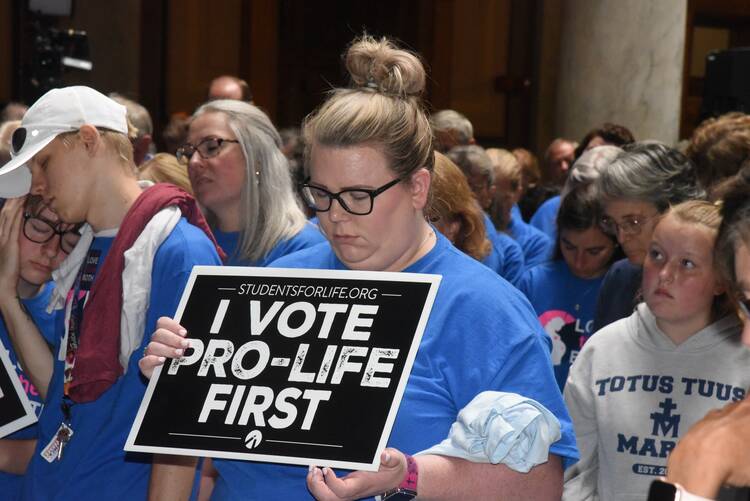 After Kansas voters resoundingly defeated a constitutional amendment allowing further restrictions on abortion in that state, the pro-life New York Times columnist Ross Douthat wrote, “With the end of Roe, the pro-life movement now has to adapt to the democratic contest that it sought.”

Mr. Douthat suggests that a near-total ban on abortion after 12 weeks might have passed in Kansas (as opposed to an amendment that would have allowed the state legislature to pass any ban it wanted), and he notes that different states have different political considerations. So the Republican governor of Georgia, Brian Kemp, is a favorite for re-election after signing a bill banning almost all abortions after six weeks, but Ron DeSantis of Florida, another Republican governor ahead in the polls, has decided on a 15-week ban. Meanwhile, Republican candidates for governor in Michigan and Pennsylvania favor abortion bans without exceptions for rape or incest, an unpopular stand that may result in pro-choice Democrats winning in those states.

Those who want to reduce or minimize abortion, as opposed to eliminating it, are in a more difficult political position.

Polls have long shown that most Americans do not want either a total ban on abortion or the legalization of all abortions, and that restrictions (if not a total ban) on abortion after the first trimester of pregnancy would meet with wide approval. The kind of time restrictions that prevail in Western Europe would likely be politically popular in the United States. My guess is that most Americans agree that the “normalization” of abortion, or its routine use, is a symptom of what Pope Francis has called a “throwaway culture” that commodifies and then discounts human life. And I think most are uncomfortable with the idea of abortion as a response to the discovery that a fetus has a mental or physical (but non-life-threatening) disability.

But it is doubtful that Americans will ever approve of a ban on abortion that does not include exceptions for pregnancies caused by rape or incest, as well as exceptions to protect the mother from serious injury to her health (and not only her death). And that brings us back to the “legal, safe and rare” preference for abortion that was voiced by President Bill Clinton in 1992 but has since been disowned and denounced by his own Democratic Party. When Mr. Douthat writes that the pro-life movement is going to have to face public opinion, is he proposing a compromise or a consensus view that could make the topic of abortion less polarizing—a ban on abortion after the first trimester that would include exceptions that make it “legal and safe” if still “rare”?

Polls have long shown that most Americans do not want either a total ban on abortion or the legalization of all abortions.

No, at least not in this week’s column. Mr. Douthat proposes “a pro-life movement that’s incrementalist and creative,” explaining, “the way you change opinion is by proving the incremental version of your ideas workable, so that voters trust you more and more.” Presumably, with Roe reversed, this incrementalist movement is to be encouraged in each of the 50 states.

This is sound reasoning on Mr. Douthat’s part, but an incrementalist strategy is incompatible with compromise, consensus, a “grand bargain,” or whatever you want to call a policy that settles a contentious political issue. Incrementalism means an intent to keep moving forward—in this case, presumably, toward a ban or near ban on abortion at any time and with extremely limited exceptions.

It is not surprising that the pro-choice side in Kansas stressed the argument that the state legislature would not stop until abortion was almost completely abolished, with none of the exceptions that voters prefer. This is also the consistent message of the National Rifle Association: Compromise is a trap because in the end, gun control proponents want to confiscate all firearms, and any “commonsense” proposals are only steps in an incrementalist strategy toward that end. It is also a tactic commonly used against environmental protection measures and zoning reforms that would allow new housing—all supposedly part of an incrementalist plan, hatched by the United Nations, to abolish property rights in the United States. If people believe that a political movement has no intention of stopping, there is little incentive to agree to any proposal that moves it toward its end zone.

The Catholic Church has an advantage of consistency here. As the U.S. bishops state, any abortion at any stage of pregnancy and for any reason is “attacking a being with a human destiny, being prepared by God to receive an immortal soul” (though the doctrine of “double effect,” which allows for interventions that save the life of the mother even when they, foreseeably but unintentionally, result in the death of the unborn child). So the church is not likely to endorse any half-measures as settling the issue of abortion in the United States.

Those who want to reduce or minimize abortion, as opposed to eliminating it, are in a more difficult position between two highly energized and well-financed political movements. The Catch-22 for them is that, as with many political issues in the United States today, any proposal that passes the test of being a true compromise, or middle ground, is also a proposal that can be portrayed as incrementalist, or part of a move toward one side or the other. Americans as a whole may want abortion policies that avoid the question of whether abortion is always wrong or never wrong, but they may not easily get them.