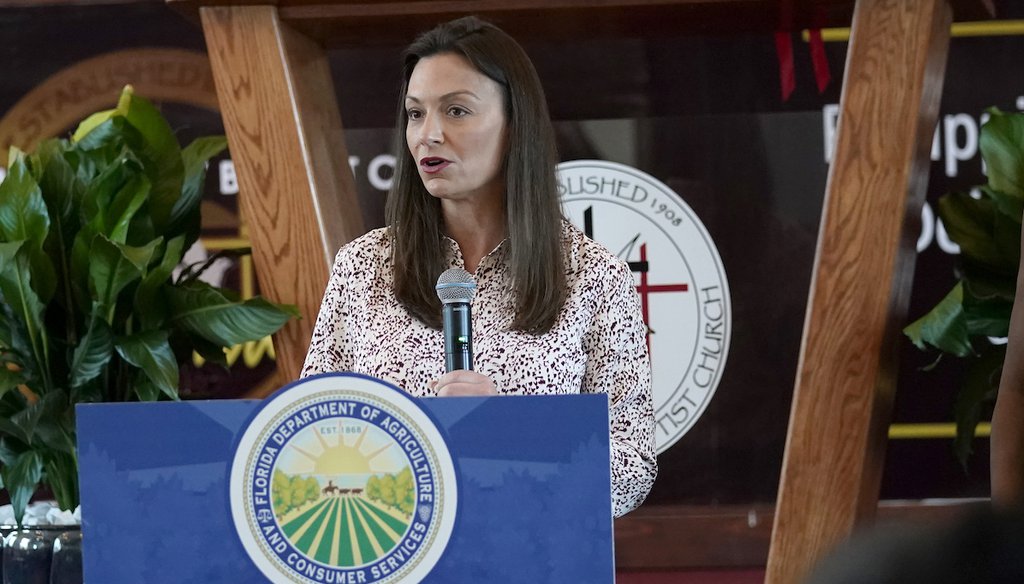 “Florida’s had 46 governors, some good, some bad — and one, depends on which way the wind’s blowing,” Fried said, walking past a field of 46 mannequins. “But with Roe gone, our cost of living out of control and no ban on assault weapons, we have to try something new.”

Fried closes the ad with digs at her opponent in Florida’s Democratic primary, U.S. Rep. Charlie Crist, who isn’t named: “I’m your only statewide elected Democrat, only pro-choice Democrat, only Democrat to have never taken a dime from the National Rifle Association.”

Crist’s past as a Republican has been a consistent line of attack for Fried. What may not be apparent to the viewer is that both candidates’ views are aligned on abortion access and gun control.

Fried is not the only ‘pro-choice’ Democrat in the race

Not unlike his party affiliation, Crist’s view on abortion has changed throughout his career.

He often made conflicting remarks about the procedure before he left the Republican Party during his 2010 Senate run. Even this year, as a Democratic officeholder and candidate who supports access to abortion, Crist has used the term “pro-life” to describe his stance.

But Fried saying she is the “only pro-choice Democrat” in the gubernatorial race is wrong. Crist has been a Democrat for nearly 10 years and has routinely expressed his support for abortion rights.

The Planned Parenthood Action Fund gave Crist a 100% rating for the 117th Congress, which convened in 2021 and runs through January 2023. The rating is based on Crist’s votes on sexual and reproductive health legislation.

The Florida Alliance of Planned Parenthood Affiliates also opted against endorsing a candidate in the Democratic primary because both Crist and Fried are “pro-reproductive health care.”

Fried’s campaign previously cited this April 12 interview with WPTV in West Palm Beach as proof that he still holds a “pro-life” stance. Crist said, “When I say I am pro-life, I mean I am for life, and I am for a woman’s right to choose and make her own decisions about her body.”

Fried’s ad closes with one last jab at Crist’s record: I am the “only Democrat to have never taken a dime from the NRA.”

In his past life as a Republican, Crist cultivated a reputation as a “pro-gun” candidate. In 1998, then-state Sen. Crist bashed legislation to require background checks for purchases made at gun shows. The bill died in committee.

During an unsuccessful bid for the U.S. Senate in 1998, Crist received donations from the National Rifle Association of America Political Victory Fund, or NRA-PVF.

NRA-PVF doled out $9,900 to Crist’s political committee ahead of the 1998 election. He also received $919 from the National Rifle Association Institute for Legislative Action, Federal Election Commission records show.

In 2006, the NRA endorsed Crist in his run for governor. The organization praised Crist for standing “strong in support of law-abiding gun owners and sportsmen.”

Then came the funding. The NRA-PVF spent $109,993 on advertisements throughout the last three months of Crist’s campaign for governor.

PolitiFact found that in September 2006 alone, the NRA-PVF spent more than $54,000 on outdoor advertising, newspaper ads and postcards. In subsequent months, the group also paid for radio ads and phone banks for Crist.

As governor for one term, Crist signed a law that allowed some concealed weapons permit-holders to bring their guns to work — if the firearms remained in their cars.

When Crist left the Republican Party in 2010, the NRA stopped supporting him. When Crist unsuccessfully challenged Gov. Rick Scott’s re-election in 2014, the NRA spent nearly $500,000 on a digital ad against him.

Crist’s campaign pushed back against Fried’s focus on his past.

“Fried wants to mislead people by implying that Charlie Crist doesn’t have a strong commitment to preventing gun violence and passing common-sense gun reform,” said Sam Ramirez, Crist’s spokesperson. “Nothing could be further from the truth.”

Fried and Crist both have an “F” rating from the NRA. The Newtown Action Alliance, a gun-control advocacy group, endorsed Crist in 2020. He also announced a plan to tackle gun control if elected, including a ban on the sale of assault weapons.