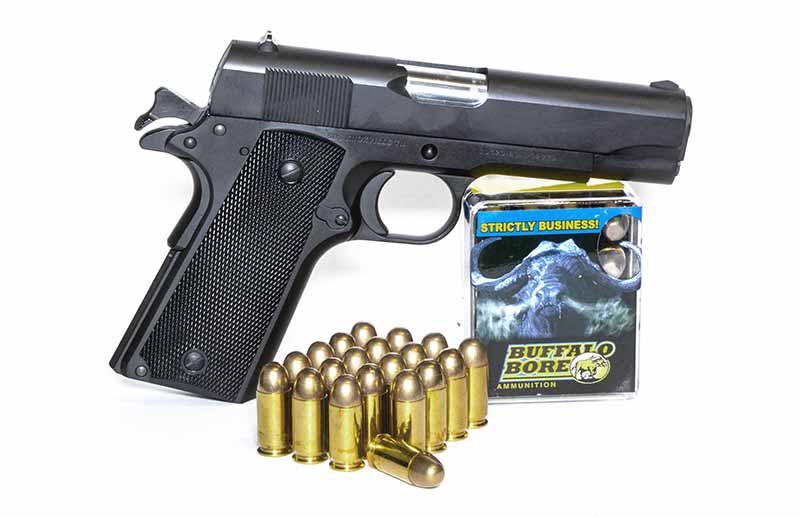 Made in Turkey by Tisas and brought in by SDS Imports, the 1911 A1 Tanker is a superb, no-frills 1911 for an affordable price.

The Colt Commander was the first mass-produced pistol with an aluminum alloy frame, and it was also the first pistol manufactured by Colt chambered for the 9mm. The Commander was indeed a 1911, but a 1911 with a shorter slide, and 4.25-inch as opposed to a 5.00-inch barrel. The Commander came about due to a request from the military for a more compact pistol, chambered in 9mm, that could be issued to officers. The Colt Commander was first produced in 1950 and was available in 9mm, .38 Super and .45 Auto.

Due to the immense popularity of their very affordable full-size 1911 GI-style pistols, SDS Imports decided that a Commander-sized version was the logical next step. But, instead of calling this pistol a Commander, SDS Imports named their GI-style, reduced-size 1911, the Tanker. This is a fitting name because it reflects the need for a more compact pistol by those who live inside small steel boxes. And, it has a special appeal to me because my MOS (military occupational specialty) was originally 19E and later a 19K. For those not acquainted with military lingo, a 19E was an armor crewman for M48/M60 series tanks, and 19K represented an armor crewman for a M1 tank.

But before we delve into the 1911 A1 Tanker, you should know a little bit about SDS Imports, the company that set the design parameters for this pistol and also imports it into the United States. SDS Imports was started by three partners with years of manufacturing and import experience who saw that there was a demand for pistols and shotguns that wasn’t being met. They decided to leverage their contacts and experience to help meet that demand, and 1911 handguns were on the top of the list of what they wanted to offer.

Just to give you an idea of who is behind SDS Imports, Scott Huff is a West Point graduate and engineer. Tim Mulverhill is the former head of product development at Kimber. Gaines Davis is an engineer and competitive shooter, and both he and Tim are firearms instructors. And Dave Biggers, who handles sales and marketing, is a former Army officer as well. To get where they wanted to go, these guys needed a manufacturing partner, and they found one in Turkey.

To build their 1911s, SDS Imports partnered with TISAS, which was established in Trabzon, Turkey, in 1993. They’ve been building pistols since 1994 and currently offer a wide selection of handguns and even semi-automatic rifles. TISAS is considered one of the top firearms manufacturers in Turkey and worldwide as well.

Essentially, SDS Imports sent their smart guys to TISAS and showed them how to build 1911s the right way. Two of the engineers at SDS Imports, Scott Huff and Gaines Davis, rotate between Knoxville, Tennessee, and Turkey to make sure TISAS is building 1911s to the high standards SDS Imports have set. These engineers literally look over the shoulders of the workers at TISAS and have instituted high quality control standards that must be met before the handguns are shipped to the United States.

There’s no need to go into a full detailed description of this pistol. It is, after all, mostly a 1911 A1 clone—a pistol that has been in continuous production since 1924. Books—many books—have been written about the 1911, and there’s no need for me to attempt to offer a synopsis here. What is notable and may be overlooked about the Tanker is that it’s what’s known as a Series 70, 1911. This means that it doesn’t have the modern firing pin block safety that’s infamous for making 1911 triggers hard to tune.

The Tanker has a 4.25-inch hammer-forged, chrome-plated barrel, and a hammer-forged frame and slide. It’s fitted with GI-style sights and checkered plastic grips, and it’s shipped with a single eight-round magazine. However, there are a few diversions from what would be considered a true 1911 A1 clone. The ejection port has been flared and lowered, the magazine well has been beveled, and the feed ramp has been polished. Also, instead of a Parkerized finish, this pistol has been fully Cerakoted, which is alone at least a $125 value! Yes, these enhancements aren’t in line with an original 1911 A1, but they do augment the functioning of the pistol. That’s not a bad thing and was a good call on the part of SDS Imports.

The trigger on the Tanker was crisp and broke at just a shade more than 4 pounds, which for most is about ideal for a defensive handgun. Also, unlike early and even current base-model Colt handguns, there were no sharp edges on this pistol to cause injury to your hands during firearm manipulation. The pistol also delivered great precision; even with the near non-existent GI-style sights, I could easily ring 4-inch steel plates at 25 yards, offhand. Slide to frame fit was very good and even maybe exceptional considering the price tag, and the barrel bushing could be removed without the aid of a bushing wrench.

The Tanker was also very reliable. I filled several magazines with a collection of defensive loads, with bullet weights ranging from 160 to 230 grains and experienced no malfunctions; the gun ran like a top. I did, however, have a few failures to feed with some lightly loaded 200-grain lead SWC loads. However, this pistol has a very stiff recoil spring—about 24 pounds, I suspect. This is a workable recoil spring weight for full power loads but too heavy for plinking loads. Fortunately, you can replace the recoil spring with whatever weight you desire to best suit your needs.

I had one functionality issue with the Tanker. On occasion, if my support hand thumb encountered the slide stop during recoil, it’d engage. Similarly, if I cycled the slide gently with an empty magazine in place, the slide stop could engage at the takedown notch. Considering you shouldn’t let your support thumb contact the slide stop when shooting, or that you shouldn’t cycle the slide gently, this isn’t a serious issue. SDS Imports is aware of the issue and are addressing it. A competent gunsmith can easily correct it too by dimpling the face of the slide stop or by just replacing the part all together. Wilson Combat offers the best slide stops in the world for about $60.

I’ll mention two things. This is a GI-style pistol with no frills. It comes in basic black and doesn’t have fancy grips or anything else to make it exceptionally attractive. It’s a fighting gun, and it looks like a fighting gun—like a gun you’d pull from the jungle mud and use to fight your way to an LZ.

Some might consider that ugly; others might consider it pretty as hell. The ugliest aspect of this pistol is the lack of an upswept grip safety to prevent hammer bite. This isn’t specific to the Tanker; it is a characteristic of all GI-style 1911 handguns. If you shoot any original-style 1911 A1 with a high grip, the hammer will bite the web of your hand.

These pistols are crossing counters for less than $400 (current MSRP is $429.95). Given the quality of manufacture, and the fact that they’re a true 70-Series style 1911 that’s reliable and dependable, it’s almost like folks are stealing them. If you’re looking to build a custom 1911 Commander, you could do a lot worse and spend a lot more money than if you started with the Tanker 45.

After satisfying myself that the SDS Imports Tanker was a pistol I could trust, my initial plan was to send it to Dave Fink at Fink’s Custom Guns, who is also the smithy at Gunsite Academy, and have him do a few modifications to include the milling of the slide for a reflex sight. However, my best friend who lives in Kodiak, Alaska, has a thing for GI-style 1911s and when I showed him the Tanker, he said he had to have it. So, it’ll fly to a little island off the coast of Alaska, be loaded with Buffalo Bore .45 Auto Outdoorsman ammo, and might very well be used to stop a bad guy or charging grizzly. My friend has already had to shoot one marauding bear.

If you’re like my friend and looking for a trustworthy GI-style 1911 of Commander size, this pistol has lots of appeal. You might replace the hammer or install an upswept grip safety to avoid hammer bite. You might also replace the sights with something a bit more modern and easier to see. The trigger—in my opinion—is good to go. Like Jeff Cooper told us, all a 1911 really needs is a good trigger, sights you can see, and all the sharp edges knocked off. Out of the box, the Tanker 45 is already two-thirds of the way there for the same amount of money you’d spend on just a carry bevel package, refinishing and trigger job.

This pistol won’t win a beauty contest, but it’ll save your life. And, well, that’s what pistols are really for. SDS Imports offers several other 1911s with various upgrades, to include their new Carry Bantam, which at $1,200 is configured to compete with top-end 1911s costing twice as much.

Editor’s Note: This article originally appeared in the 2021 October issue of Gun Digest the Magazine.