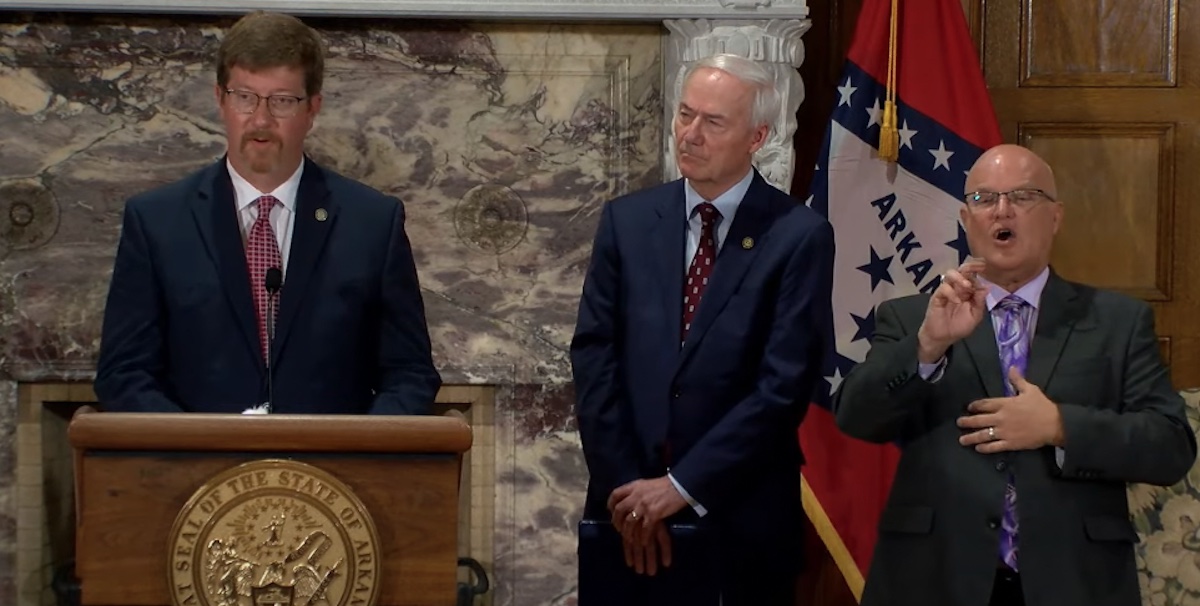 The Arkansas School Safety Commission’s newly debuted draft report calls for an armed guard on every campus, despite evidence that guns in schools do nothing to stave off school shootings.

Governor Hutchinson and Commission Chairwoman Cheryl May held a press conference Tuesday to share highlights from the report, which also pushes mental health resources for students, folding in safety features as a component of school design and keeping campus doors locked at all times.

Hutchinson first launched the Arkansas School Safety Commission in 2018 after a gunman killed 17 people at a high school in Parkland, Florida. He called commissioners back to work this summer after the massacre of 19 children and teachers at Robb Elementary School in Uvalde, Texas. The 2022 draft report offers mostly recommendations of the can’t-hurt-might-help variety, measures unproven to prevent school shootings but certainly helpful in preventing suicide, depression, bullying and other struggles common among students.

None of the commission’s recommendations address unfettered access to guns, a fundamental component of every school shooting.

And Tuesday’s press conference included a fair amount of gaslighting about the value of school resource officers. Multiple studies, including this one in the Journal of the American Medical Association, find armed guards in schools don’t deter shooters, and in fact are associated with higher body counts and more injuries. Still, May suggested an armed presence at Robb Elementary could have made all the difference that day.

“If there had been an SRO that had been there, the fact that the door wasn’t locked might not have been an issue at all,” she said, suggesting that the lack of a full-time armed guard at the Robb Elementary campus cleared the way for the shooter to enter without any resistance. In fact, armed local law enforcement officers had chased the shooter from the scene of a nearby car accident and were requesting permission to shoot him before he went into the school. (This information is contained on Page 127 of May’s own report.)

The commission’s draft is 158 pages long, with the last 30 pages or so dedicated to a play-by-play report on what went wrong at Robb Elementary, and you can read the whole thing here. The final report is due in October.

While Hutchinson, May and Arkansas Department of Education Director Johnny Key patted each other on the back Tuesday, anyone who wants to actually move the needle on preventing school shootings was left wanting.

“While I’m glad to see the state considering the issue of gun violence, the School Safety Commission’s recommendations are incomplete without any discussion of common sense gun legislation,” state Rep. Nicole Clowney (D-Fayetteville) said. A former leader with the gun safety group Moms Demand Action for Gun Sense in America, Clowney is a dependable advocate for evidence-based measures to prevent gun violence. “There is absolutely no evidence, for instance, that the presence of armed school personnel prevents gun violence. However, ample data shows that reasonable gun regulations — like universal background checks or raising the minimum age for assault rifle purchases — do.”

Clowney made a pitch for the governor to consider meatier solutions to keep students from getting their hands on guns in the first place.

“Arkansas children deserve schools that feel safe and are safe. The data is loud and clear about what will get us there. It’s time for us to listen.”

Recommendations from the School Safety Commission’s first report in 2018 are largely in place, and Hutchinson touted an increase in the state’s corps of armed guards in schools, up to 460 from 315 in 2018. That first report also recommended an armed presence on every campus, although the recommendation seems to be getting more weight this time around. Hutchinson acknowledged Tuesday that legislators might decide to make that recommendation a requirement, an expensive but not unlikely proposition for a body that scoffs at the idea of bringing teacher pay up beyond the currently insulting levels but can be counted on to vote for putting more guns in more places. While Hutchinson said he doesn’t know if lawmakers will want to go that far, he certainly teed them up if they decide to.

“I think that it is ultimately a resource issue,” Hutchinson said. “We’re recommending SROs [school resource officers] to be in every school, or an armed presence.”

That armed presence could range from on-duty police to pistol-packing lunch ladies. Arkansas law allows for non-law enforcement officers, including teachers, principals and other school staff, to carry guns if they undergo 60 hours of training. (Is now a good time to bring up the 2013 debacle in which the governor’s nephew, an advocate for arming school personnel, capped a teacher with a rubber bullet during a practice run? “He was invited to attend an “active shooter” training and—using a rubber bullet-loaded pistol—he mistakenly shot a teacher who was confronting a ‘bad guy,’” the Arkansas Democrat-Gazette reported.)

The governor has for months been advocating for the state to commit $50 million for grants to help Arkansas school districts install cameras, buy stronger locks and otherwise meet the new safety recommendations. The money is there, unless legislators give it all away in the form of tax cuts that will mainly benefit the already wealthy. While the Republican supermajority legislature balked at using any of the state’s record surplus on teacher raises, it’s a safe bet they’ll approve a $50 million school safety allocation during a special session next week.

Other recommendations from the 2018 report that are already in place but could get renewed attention include mandatory school safety assessments, school climate and culture assessments and more training for counselors.

“There’s not one single thing that a school can do that can make that school safe,” May said Tuesday, but deploying multiple strategies and layers can help. And May suggested lapses in protocol were largely to blame for the May 24 massacre in Uvalde. “Robb Elementary had a culture of noncompliance,” she said.

While mental health has become red staters’ favorite red herring to deflect attention from the guns themselves, May kept up the focus on bullying and emotional distress. There’s not much evidence any of that will prevent the next Uvalde or Parkland. Still, sending more mental health resources to schools still sounds like a good idea in this era of COVID anxiety and existential ennui.

For now, safe storage laws, background checks on all gun sales and other proven gun safety measures remain off the table in Arkansas. When Hutchinson reconvened the commission this summer, he stipulated any changes to gun laws would remain outside the commission’s purview. “Access to firearms in our society, that’s not going to change, whatever law we pass. The focus should be on school safety,” Hutchinson said in June. It’s a cop out that will cost lives, but not a big surprise from one of the NRA’s most reliable cheerleaders.