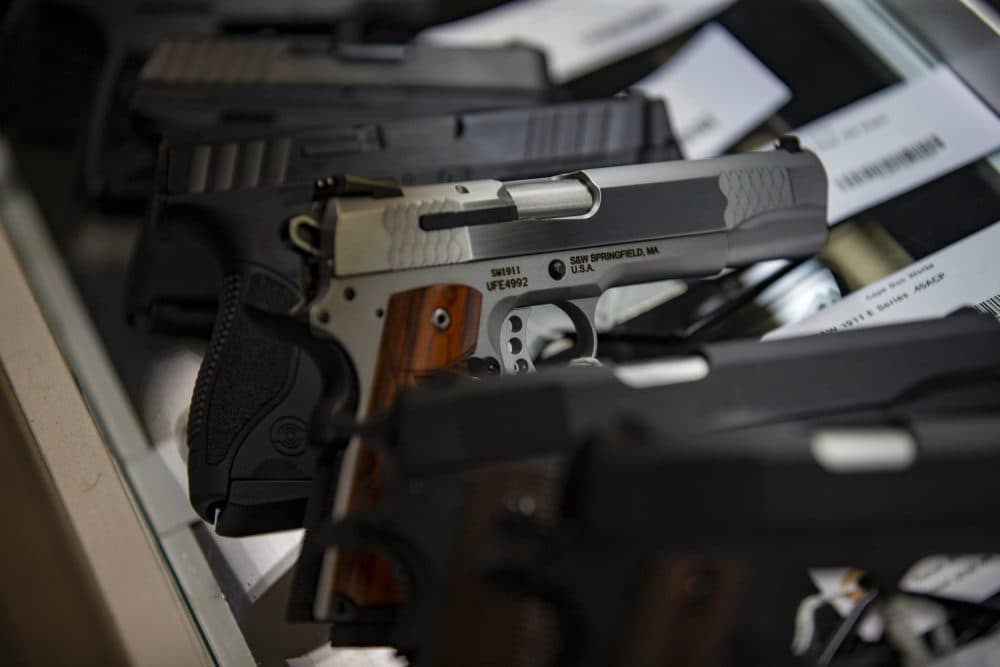 In Massachusetts — a state not known for its gun enthusiasm — firearm sales hit record levels over the past two years, with handguns dominating the purchases.

A WBUR analysis of state data found that gun dealers here sold almost 276,000 firearms from 2020 through 2021. Of those, 64% were handguns, which people tend to buy for self protection. Another 23% were rifles, including the controversial AR-15 style weapons of the sort used in high-profile mass shootings.

All told, Massachusetts gun sales last year were up 57% from 2019 — and doubled from a decade ago.

The state’s numbers mirror a national trend: After a dip during the Trump presidency, Americans have been stocking up on firearms in large volumes.

Leary said a lot of his customers during the pandemic were first-time buyers. Many “haven’t fully grasped the idea of wanting to own a firearm for defensive purposes, but something brought them here,” Leary said. “They feel like they’ve been spurred to do it based on what they see, or their own personal feelings about the world.”

Many customers told him they didn’t like guns, but fear drove them to get one. What people are afraid of depends on whom you ask.

Frank Garrido, a 63-year-old financial advisor from Taunton, said he’d always shied away from guns, but decided to arm himself in the wake of unrest in U.S. cities and calls for police reform in the last few years.

Garrido got his firearms license last summer and said he is now “addicted”; he owns six guns — some for protection, others for target practice.

“If I go to Walmart, if I go to a movie theater, if I go to a church, a gathering with a group of a lot of people, I always carry,” he said.

The Supreme Court in June opened the door for more people to legally carry concealed weapons, like Garrido. That ruling loosened gun restrictions in many states, including Massachusetts, giving people the right to carry firearms in public.

State lawmakers on Monday agreed on a measure to shore up Massachusetts rules in the wake of that decision, by requiring gun applicants to have a “personal interview” with police and barring people under harassment prevention orders from obtaining a license to carry. But a proposal to make people re-apply more often for a license to carry (every three years, instead of six) failed to pass.

Leary, in a recent self-defense class at his store, was teaching pistol handling, and walking new gun owners through how to prepare for a home break-in or a surprise ambush on the street.

“They’re bringing to class the gun that they are most likely going to carry in the real world out there,” he said.

Leary said more women and people of color also have been coming in to shop for guns. Even his lunch lady from middle school showed up one day. In addition to offering classes, his shop hosts group events, from birthday gatherings to ladies’ nights.

“I call them these roving bands of ladies that come in together and they want to shoot on Thursdays,” he said.

Gun ownership is becoming more diverse nationally, too. A recent paper by researchers at Northeastern University and Harvard University found that while the majority of people who bought guns in this country between 2019 and April 2021 already owned a firearm, about one in five were first-time gun buyers. Almost half of these new owners were women. And nearly half were not white.

“More women and more people of color are buying guns, and enough of them that the overall composition of gun ownership seems to be changing,” said Deborah Azrael, director of research at the Harvard Injury Control Research Center, who co-authored the study.

Fear and anxiety have run especially high over the last two years, fueled by isolation and frustration during the pandemic. Some experts said the gun industry has capitalized on these emotions. Across the country, there were 5.4 million first-time gun buyers in 2021, according to the National Shooting Sports Foundation, an industry group based in Newtown, Connecticut. (That doesn’t count private transactions, where thousands more firearms change hands annually in Massachusetts alone.)

John Rosenthal, co-founder of Stop Handgun Violence, a Beverly nonprofit that advocates for safer gun laws, criticized gun trade groups for straying far from their early missions to promote sport and rifles. “The National Rifle Association should be called the National Handgun Association,” he said. “They promote handguns, easily concealed, for self-protection.”

While rifles in civilian hands are typically meant for hunting, handguns are sold primarily as tools for self-protection at home and in public spaces. The gun industry touts the need to protect oneself from possible criminals and to become what the NRA calls an “armed citizen,” prepared for the worst.

“The narrative that we are unprotected and in danger and under existential threat by all sorts of forces seems to have gathered traction,” said Azrael, the Harvard researcher. “The gun industry has always been incredibly good and attentive to creating markets — and selling and selling and selling.”

NRA spokesman Lars Dalseide said in a statement that the group promotes the responsible use of whatever firearm “best suits the individual need of every gun owner, whether that be a handgun, shotgun, or rifle.” He said Massachusetts gun sales climbed in response to calls to defund the police and to a perception of prosecutors being soft on crime.

But the recent surge in gun sales has health experts and gun control advocates worried.

“The risk of that gun being used in a suicide or homicide or in an unintentional injury overwhelms any benefit,” she said. Azrael emphasized the need for public officials to focus on education and proper firearm storage.

Leary, the store owner, opposes placing any limits on gun ownership. But he acknowledges there are risks associated with hundreds of millions of guns “floating around the United States.”

“I do believe that the number one thing, as a responsible gun owner, is to ensure that my guns don’t fall into the wrong hands,” he said, “and that whenever it’s in my power to do so, that I can prevent a negative outcome with that firearm.”

Laura Kraegel, the Roy Howard Fellow at WBUR, contributed to this report.