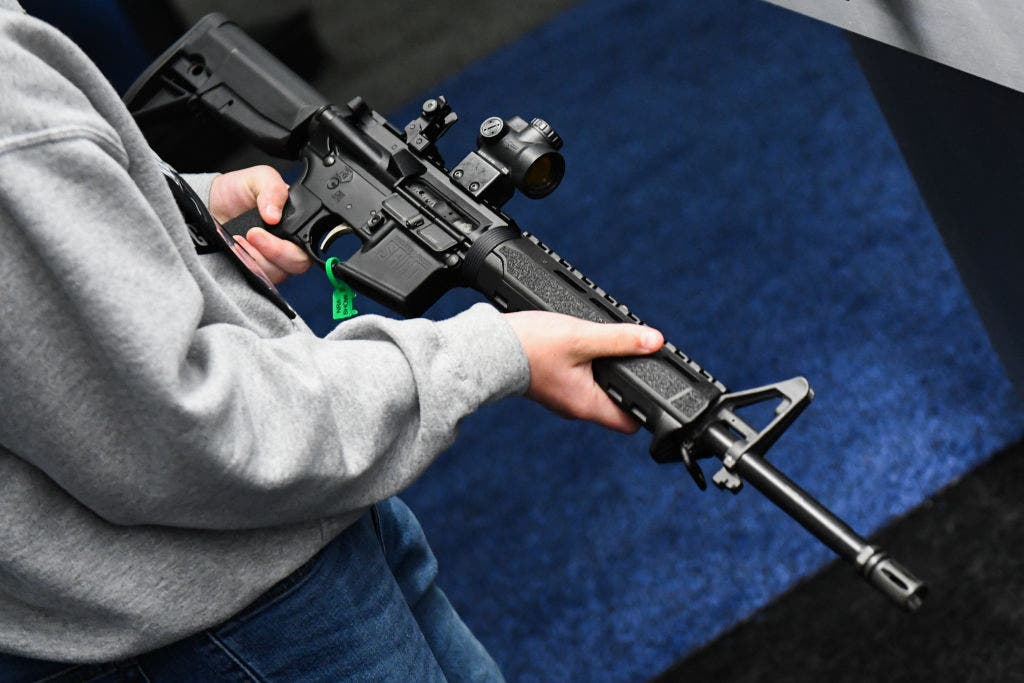 “What about our right to live?” countered Rep. Pramila Jayapal, D-Wash.

The trio of mass shootings in Buffalo, Uvalde, Tex., and Highland Park, Ill., sparked House Democrats to prep a bill to ban high capacity weapons and energize their voters ahead of this fall’s midterms.

The House Judiciary Committee met recently to craft the plan.

Democrats accuse Republicans of yielding to the gun lobby.

“How in the hell is Wayne LaPierre – his blood money – worth that price?” asked Rep. Mondaire Jones, D-N.Y., of his GOP colleagues. “It will never cease to amaze me how a political party that is self-described as pro-life still knowingly allows the American people to be slaughtered by weapons of war.”

Counterarguments came easy for Republicans. They simply accused Democrats of ignoring the Constitution.

Democrats then pointed out that it was illegal for Americans to own tanks and other military hardware.

“You are perpetuating violence!” thundered Hogg. “You need to realize that this is not enough now. Democrat or Republican. Stop these things now!”

Democrats painted a grisly picture about the carnage from assault weapons.

“Organs ruptured and shredded. Bones shatter,” said McBath. “When (people are) shot in the head, their skulls explode.”

Senate Majority Leader Chuck Schumer of N.Y., is seated before a Senate Rules and Administration Committee. On Monday, he addressed a gun legislation deal that could become law.
(Elizabeth Frantz/Pool via AP)

This isn’t the first time Congress tangled with an assault weapons ban. Lawmakers passed such a measure as part of a major crime bill in 1994. The House approved the assault weapons ban as a standalone bill in May of that year, 216-214. Senate Majority Leader Chuck Schumer, D-N.Y., – then a Congressman from Brooklyn – authored the assault weapons prohibition. Schumer used familiar language to make his case against high capacity weapons 28 years ago.

There’s consensus among political analysts that Democrats are poised to lose control of the House in this fall’s midterms – with Republicans potentially securing historic gains.

Democrats lost the House in 1994 for the first time in four decades. Republicans claimed a staggering 54 seats. It was the largest seat gain for either party since 1948.

Historians assert that a crime bill – written by President Biden as he served as Senate Judiciary Committee chairman – proved to be one of the key reasons Democrats lost the House in that seismic, political earthquake.

The House initially approved the assault weapons ban as a standalone measure. But Congressional leaders later incorporated the prohibition into the broader anti-crime package.

The National Rifle Association then turned on Democrats who voted yes.

Almost all Democrats previously supported by the NRA crashed to defeat. In fact, one can trace the political fallout of that November directly to the crime bill and assault weapons ban earlier in the year. That’s partly why the NRA emerged as the political juggernaut it is today.

Regardless of the political consequences, Republicans contend the assault weapons ban was a failed experiment.

“It didn’t do any good,” said Rep. Steve Chabot, R-Ohio, who won his first race for Congress in 1994. “And I don’t think it would do any good at this point either. And it would probably be struck down by the United States Supreme Court.”

“Whatever the weaknesses of the 1994 bill, gun deaths went down by 25 percent promptly. And when the bill was allowed to lapse, they went right back up,” countered House Judiciary Committee Chairman Jerry Nadler, D-N.Y.

A Springfield Armory SAINT M-LOCK AR-15 semi-automatic rifle is displayed on a wall of guns during the National Rifle Association (NRA) Annual Meeting at the George R. Brown Convention Center, in Houston, Texas on May 28, 2022.
(Patrick T. FALLON / AFP via Getty Images)

The impact of the assault weapons prohibition was mixed.

Deaths in mass shootings fell over the decade that the policy was the law of the land. Gun crimes committed with assault weapons dropped. But use of high capacity magazines in crimes offset those improvements.

There are chasms between the parties as to how to curb mass shootings. Republicans advocate more arms.

“History is replete with examples of the extent to which Americans have defended themselves, using the weapons the majority wants to take away,” said Rep. Chip Roy, R-Tex.

Roy cited a man using an AR-15 to shoot the man who shot up a church in Sutherland Springs, Tex., in 2018 – and a host of other episodes.

Democrats view the “good guy with the gun” maxim as a delusion.

“The Republican argument that school shootings would be prevented by simply introducing more armed officers into schools is a fallacy. We just watched it play out. It turns out these assault weapons are so lethal that they scare the hell out of other people who have guns,” said Jones.

Don’t expect any compromises on guns any time soon. Republicans who worked with Democrats on the recent gun/mental health package are through. They question additional firearms regulations.

“One of the abject lessons I think, of what happened in Highland Park is that the strictest gun law in the nation did not prevent this terrible act,” said Sen. John Cornyn, R-Tex., one of the main negotiators of the June gun measure.

House Democrats plan to put the assault weapons measure on the floor in the coming days. They don’t yet have the votes on their side to pass the bill.

Here’s the current House breakdown: 431 members. 220 Democrats. 211 Republicans. That means Democrats can only lose four members on their side without needing help from the GOP to pass a bill.

Some moderate Democrats like Reps. Kurt Schrader, D-Ore., and Jared Golden, D-Maine, could vote no.

Fox is told that fewer than five GOPers would vote yes.

Rep. Chris Jacobs announced he would be dropping out from his reelection campaign after the backlash that followed his support for an assault weapons ban.
(AP Photo/Jacquelyn Martin, File)

Jacobs faced a backlash for his stance. So, he withdrew, saying running again would be “an incredibly divisive election.”

The assault weapons plan goes nowhere in the Senate. It lacks the votes to overcome a filibuster.

So, this is again an election year issue. Democrats will use the vote to gin up support for their side in the midterms – and make the case they need to change the filibuster by electing more Senate Democrats.

The assault weapons ban undercut Democrats in 1994. This fall’s election is about the economy. But this isn’t 1994. Mass shootings seemingly rattle the public at an alarming rate.

It’s doubtful that an embrace of stricter firearms policies can flip the election to Democrats this fall. But Democrats hope it could help them chip away at Republican advantages in ways not seen before at the ballot box.

Chad Pergram currently serves as a congressional correspondent for FOX News Channel (FNC). He joined the network in September 2007 and is based out of Washington, D.C.