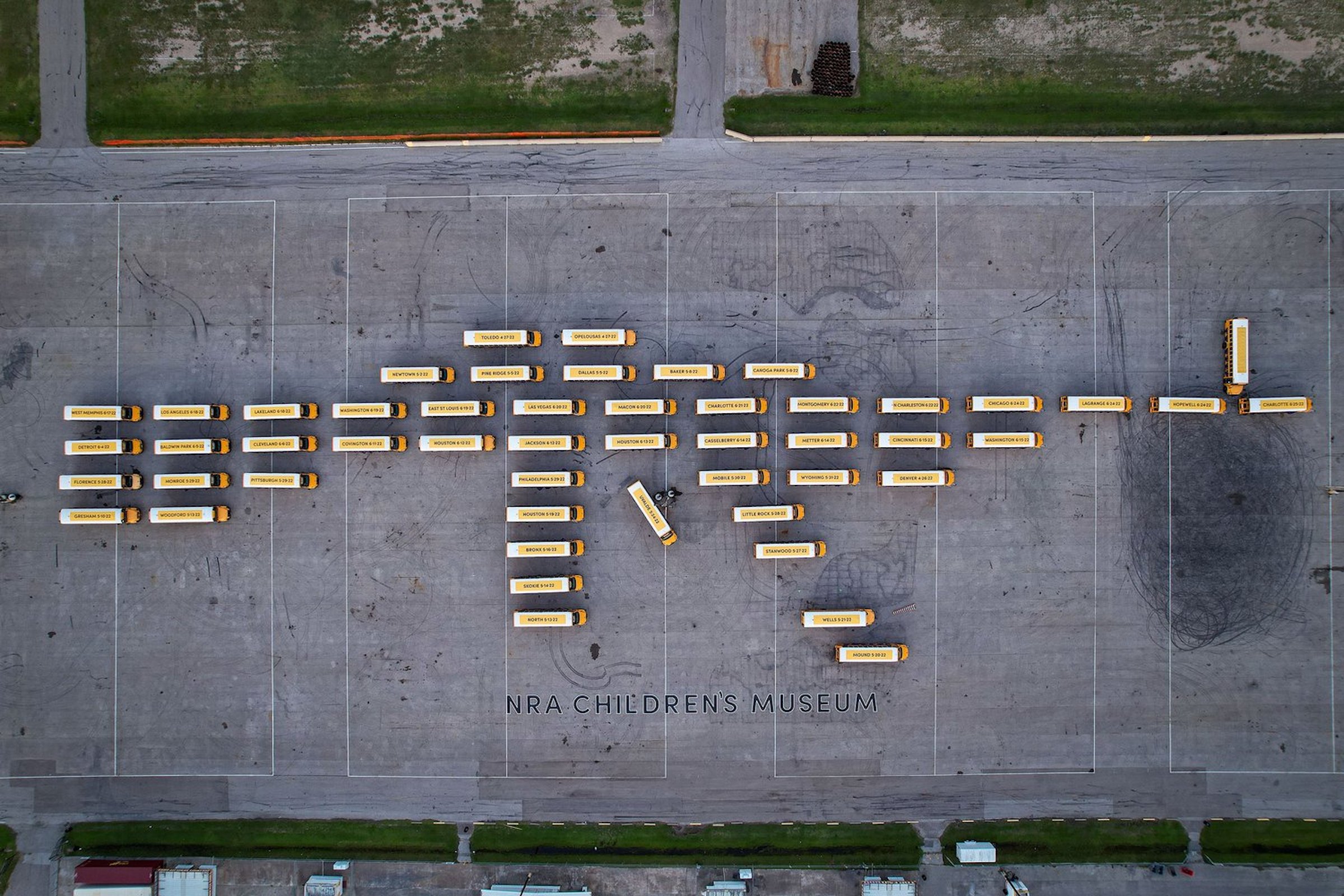 A mile-long convoy of 52 yellow school buses paid a visit to Republican Senator Ted Cruz in Houston, Texas, last week. Two years ago, the buses’ 4,368 seats could have been filled with kids on their way to school, but on July 14, they arrived empty at Cruz’s home and office, each eerily vacant seat representing a child killed by gun violence since 2020. In that year, guns surpassed car accidents as the leading cause of death among children.

Inside the buses, collectively called the “NRA Children’s Museum,” the belongings of murdered children were on display — beat-up Vans sneakers, a card for kindergarten graduation, a pair of tiny gloves.

The project was spearheaded by Manuel and Patricia Oliver, whose teenage son Joaquin was one of 17 people murdered in the 2018 mass shooting at Marjory Stoneman Douglas High School in Parkland, Florida. In response to the massacre, the Olivers started an organization called Change the Ref, which seeks to reduce the National Rifle Association’s (NRA) influence in American politics.

Five years before he died, Joaquin Oliver penned a letter for a school project advocating for background checks on gun purchases, a measure that the NRA opposes. Last week, his father handed the letter to a staffer outside Cruz’s home.

Manuel Oliver spoke to the true issue at the heart of America’s gun violence pandemic. “We’re going after the money,” he said in an interview with Buzzfeed News. “These leaders are not loyal to the Second Amendment. They’re loyal to the gun industry and manufacturers, who protect them. And there’s lots of messages that supporting gun control is not patriotic.”

“It’s corrupt,” he continued. “And I wanted to find a graphic way of showing them what the impact really is.”

Ted Cruz has received more money from pro-gun individuals and groups in the last ten years than any other member of Congress — $442,000 according to the campaign finance database OpenSecrets. But this number only reflects direct donations and excludes other forms of political influencing, like attack ads against anti-gun opponents. Last year, America’s gun lobby spent a record $15.8 million on political influencing.

Perhaps fearing a political shift that could dent their bank accounts, the gun lobby almost tripled their spending after the 2013 shooting at Sandy Hook Elementary School that left 26 people dead, setting a record that they broke in 2021.

Another tragic milestone was reached that year: There were more mass shootings in America than ever before — almost 700. And in the years since Sandy Hook, there has been almost no meaningful gun legislation.

“We want voters to remember which politicians are in the pocket of the NRA when they visit the polls in November,” Patricia Oliver said in a press release.

According to Manuel Oliver, Ted Cruz is only the first politician who will be visited by the NRA Children’s Museum.

“To every politician who has stood by, taken NRA money, and refused to listen to the people they represent: The museum is on the way to honor you next,” Oliver said.

This is not the first time the Olivers have made headlines for their gun control advocacy initiatives, which often include a creative or performative element. In June last year, the parents tricked David Keene, the ex-president of the NRA, into giving a speech to a stadium filled with 3,044 white chairs, the empty seats once again representing lives lost to gun violence. The unknowing Keene practiced a speech to the 2021 graduating class of the fictional “James Madison Academy,” preaching a pro-gun message to an audience of ghosts.

“There are some who will continue to fight to gut the Second Amendment, but I’d be willing to bet that many of you will be among those who stand up and prevent them from succeeding,” Keene said, addressing the empty chairs.

And on July 11, Manuel Oliver interrupted a White House speech by President Joe Biden, crying, “You have to do more!” He had been invited to the event along with other relatives of mass shooting victims. Biden was discussing the successful passage of the Bipartisan Safer Communities Act in late June, which provides $15 billion for schools to improve mental health resources and security measures, implements stricter background checks on gun buyers under the age of 21, and bans people convicted of domestic violence from buying a gun. Notably, the legislation did not ban assault rifles or raise the age requirement for gun purchasers: The Uvalde shooter, aged 18, used an assault rifle he had purchased himself.

“This legislation is real progress but more has to be done,” Biden said in his speech. “The provision of this new legislation is going to save lives and it’s proof that in today’s politics we can come together on a bipartisan basis and get important things done. Even on an issue as tough as guns.”

But the gun lobby, made up of groups like the deep-pocketed NRA, remains a behemoth industry and a seemingly impenetrable force in American politics, even as mass shootings have skyrocketed in recent years. At the beginning of June 2022, there was an average of more than one mass shooting per day.

“To commemorate this horrific historic moment, we are showing American voters the toll these politicians have taken on our children’s lives with this all-too-real archive,” Oliver said.

Colescott’s use of stereotypes and humor continues to make viewers feel uncomfortable because it jabs indelicately at our complicity.

Outro: World-Building Within and Outside the Studio at the SVA Chelsea Gallery features new work by 26 recent graduates, on view through August 15.

The German artist’s work is exceptionally relevant today, embracing topics such as gender, queer identity, and the search for a safe, welcoming haven.

First Nations, Métis, and Inuit leaders have asked for their cultural heritage to be returned ahead of the pope’s visit to Canada.

As an official observer, advocate, survivor, and citizen, I spiraled into a vertigo worsened by the adamant conjectures of fanatics and truthers.