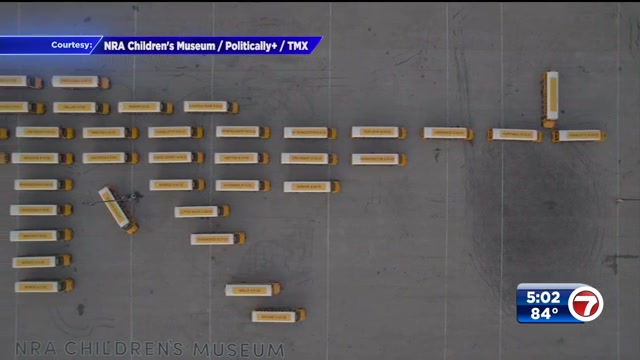 HOUSTON (WSVN) — The parents of Parkland victim Joaquin Oliver took their calls for gun control legislation on the road with a powerful mobile presentation, and their first stop was at the home of a Texas senator with ties to gun lobbying groups.

Manuel and Patricia Oliver are literally driving home their point with a demonstration they want certain lawmakers to see: 52 empty school buses, representing the 4,368 children who were victims of gun violence since 2020, all organized in the form of a rifle.

Inside some of the buses are pictures of videos and personal belongings of children who lost their lives.

The mobile museum was created by Change the Ref, an organization founded by the Olivers. The couple said the presentation was named after the National Rifle Association.

The Olivers lost Joaquin in the Feb. 14, 2018 mass shooting at Marjory Stoneman Douglas High School. Seventeen people were killed in the massacre.

The couple said they are showing the museum to politicians who receive funding from the NRA. They made their first stop on Thursday, outside the home of U.S. Sen. Ted Cruz.

The Republican lawmaker has received hundreds of thousands of dollars from gun lobbying groups.

“Mr. Cruz has received a huge amount of money from the NRA, and that’s the reason why things don’t move forward,” said Manuel.

The Olivers are calling on Cruz to enact legislation for universal background checks and to stop accepting NRA funding.

The Olivers also gave the senator a letter that Joaquin wrote when he was 12 years old.

“‘I am writing this letter to talk to you about how we are going to solve this gun law movement. Most of you have a problem with the idea of a universal background check. Why are you mad that there’s a background check? It’s for your own good,’” she said. “‘Maybe you are fond of having crazy people with death machines. You shouldn’t have anything against background checks if you’re innocent. Thank you, Joaquin, Coral Springs.”

Copyright 2022 Sunbeam Television Corp. All rights reserved. This material may not be published, broadcast, rewritten or redistributed.

Join our Newsletter for the latest news right to your inbox
This article was originally published by Einnews.com. Read the original article here.
You Might Like