The US Senate on Tuesday confirmed President Joe Biden’s nominee to lead the federal agency overseeing gun regulations, which had lacked a permanent director for over seven years.

Steve Dettelbach, 56, will now become the director of the Bureau of Alcohol, Tobacco, Firearms and Explosives (ATF), following a series of deadly mass shootings that have shaken the country.

The former federal prosecutor was narrowly confirmed with the support of 48 senators, including two Republicans, against 46 opposed.

He will oversee the ATF’s 5,000 employees, half of whom are ballistics specialists who investigate gun crimes. The agency is also tasked with regulating the nation’s firearms industry, making it a perennial enemy of the powerful National Rifle Association (NRA).

“After years of obstruction by the gun lobby, the Senate has finally confirmed a permanent director to lead the ATF,” Senate Majority Leader Chuck Schumer said in a statement.

“While certainly not a panacea to the gun violence epidemic plaguing our nation, having Mr Dettelbach at the helm of the ATF will ensure the feds have all hands on deck in the fight to stop gun trafficking, prevent illegal possession of firearms, and make sure our kids can’t get their hands on dangerous weapons,” he added.

According to the Gun Violence Archive website, more than 23,300 people have been killed by firearms in the United States so far this year, including nearly 12,800 who died by suicide.

Biden, a Democrat, had previously nominated former ATF agent David Chipman, a gun control advocate, to be the agency’s director.

But the president had to withdraw his nomination last September, after Chipman did not gain the support of all Democrats in the Senate. This backpedaling was seen as a sign that the NRA — which vocally opposed Chipman’s appointment — still wields significant influence in the US capital. 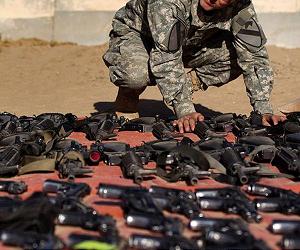 
US President Joe Biden said Monday that a flood of guns is turning US communities into “killing fields” and vowed to reinstate a ban on assault rifles.

In a White House ceremony to mark new gun control legislation that he signed on June 25, Biden said it was the first significant progress in 30 years, but did not go far enough to rein in US gun violence.

“This has taken too long, with too much of a trail of bloodshed and carnage,” Biden said.

“The past many years, across our schools, places … read more