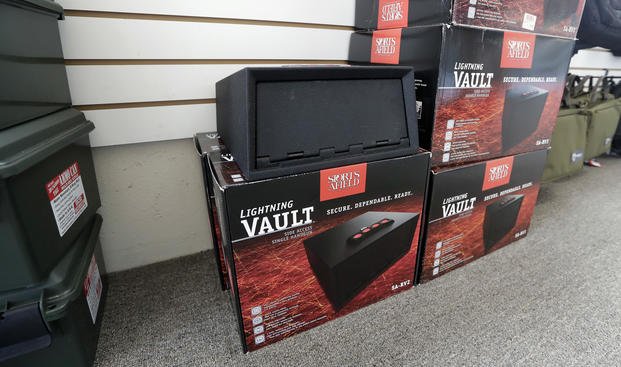 House lawmakers have signed off on a plan aimed at preventing military suicides by offering gun safes, locks or other safety devices to troops to store their personal firearms.

Under a measure proposed by Rep. Jackie Speier, D-Calif., the Pentagon would run a six-year pilot program to furnish “secure gun storage or safety devices for the purpose of securing personally owned firearms when not in use” to service members who volunteer to participate.

The pilot program would be available at five installations, to be chosen by the Pentagon within two years of the bill passing. When the pilot program is completed, the department would have to give Congress a report on whether it helped reduce suicides.

Read Next: How 2 American Veterans Ended Up in Ukraine, Prisoners of Russian-Armed Militants

“The experts are saying to us, if we have the simple process by which, voluntarily, service members can request a gun safe or a firearm lock and have it paid for, that will save lives because ideations can come and go so quickly,” Speier said on the House floor, citing expert testimony to the House Armed Services Committee. “We have an obligation to address this extraordinary rate of suicide in the military. This is one modest step.”

The plan was approved by the House in a 226-203 vote as an amendment to the annual defense policy bill being debated this week.

The full defense bill, called the National Defense Authorization Act, or NDAA, must still be approved by the House and then reconciled with the Senate’s version of the bill before the gun safe pilot program could become a reality.

The version of the NDAA advanced by the Senate Armed Services Committee last month already contains a similar provision, increasing the likelihood some form of the pilot program will remain in the version of the bill that becomes law.

In 2020, firearms, most of which were personally owned, accounted for 64% of the 384 active-duty suicide deaths that year, according to the Defense Department’s most recent annual report on suicide released in October. Firearms were involved in an even greater percentage of Reserve and National Guard suicides, at 75% and nearly 80% respectively.

Firearms have also been the leading method of suicide for military familiy members, accounting for 55% of deaths in 2019, the most recent year data is available.

The Biden administration has leaned into gun safety as a way to curb suicides among service members and veterans, unveiling a strategy in November that called on the Pentagon and Department of Veterans Affairs to craft a “plan for addressing lethal means safety awareness, education, training and program evaluation” including safe storage of weapons and medications that could be used in a suicide.

In line with those efforts, the Pentagon announced in May that service members can ship empty gun safes to their next duty station without it counting against household goods weight allowances.

During floor debate on her amendment, Speier highlighted that the National Rifle Association, a fierce opponent of gun control that Republicans are loath to cross, is “satisfied with this amendment.”

Still, most Republicans opposed the pilot program, with just seven voting with Democrats in support of the amendment.

Rep. Mike Rogers, R-Ala., the ranking member of the House Armed Services Committee, argued it should not be the Defense Department’s responsibility to provide safety devices for personal firearms.

“This should be the responsibility of the service member who owns the firearm,” he said on the House floor. “Most firearm manufacturers provide gun locks with the sale of the firearm. They are also available at very low cost at many sporting goods stores around the country.”

Related: Suicides Among US Troops Rose 15% in 2020, With Firearms Closely Tied to Deaths

© Copyright 2022 Military.com. All rights reserved. This material may not be published, broadcast, rewritten or redistributed.