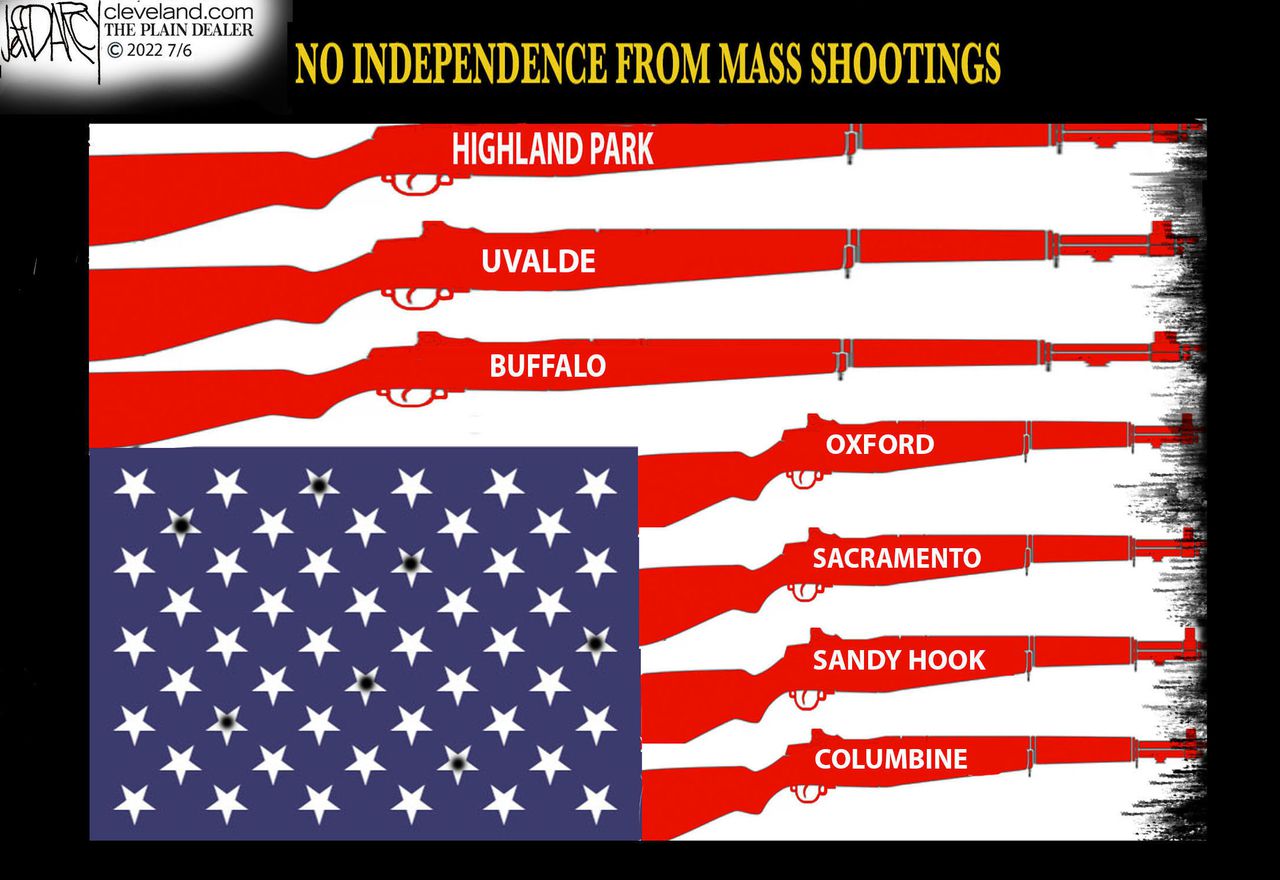 The irony is profound.

Another mass shooting at an event where Americans came to celebrate our freedom. This at a time when Americans are arguably less free.

You know the details.

The place: Highland Park, Illinois, a wealthy suburb of the murder capital of America – Chicago.

The event: A Fourth of July parade.

The incident: Weeks ago, another young American madman begins planning a killing spree. The 21-year-old – already known to law enforcement because of two incidents that should have labeled him deeply troubled – shows up at a parade dressed in women’s clothes to avoid being identified, carrying a weapon of war, one of five guns he purchased legally in Illinois. He climbs a fire escape to the roof of a building, gets in his shooting stance and fires 70 rounds into the innocents.

These are the tragedies we hear about. We don’t hear much about the continuing carnage in Chicago, where 71 people were shot over the July 4 weekend. On Staten Island, a 14-year-old is being held for allegedly firing two shots in the direction of police officers. A 48-year-old shot in the face in New Brighton over the weekend. A Staten Island mom pushing her child in a stroller in Manhattan shot in the head. Dead.

The common denominator: Guns. The things held sacred by so many Republicans in our nation’s capital.

How many of the more than 300 mass shootings in our country this year alone have you heard about? That’s right – more than 300. Were you aware of the 27 shootings at schools this year?

This is what we call freedom today. Freedom to either buy or somehow obtain an assault weapon that has no other purpose on our streets than to kill multiple people in seconds.

Freedom to walk the streets in hopes you’re not a random target? Not a victim in the crossfire? Not part of a gathering that a lunatic picks, to kill as many as he can?

It struck me as I sat in MetLife Stadium with my family a few weeks ago at a McCartney concert with about 50,000 others, reliving the days when John, Paul, George and Ringo mesmerized a generation, preaching “all you need is love,” Vietnam and anti-war protests a hazy memory.

What were the chances that among those 50,000 was one madman hell-bent to make a name for himself?

It struck me as I waited on an outdoor line 30 people long to get ice cream for the family over the July 4 weekend, with just two servers behind the counter. What were the chances of one madman, antsy after waiting so long, spinning around with a pistol?

What happened to that freedom . . . the freedom to congregate without fear?

Maybe it’s my age. Maybe I read too much about crime on Staten Island. Or maybe our nation is held hostage by mentally ill people who seek attention or satisfaction the only way they can get it – mass murder – and politicians too fearful of a volatile electorate to do anything meaningful about it.

These tragedies have become a contagion where one mass murder begets the next. We should all fear it cannot be harnessed, let alone stopped. The political mood in America refuses to allow what’s needed to harness it.

Politicians fawned all over themselves last month when Congress passed a gun control bill. The first in three decades, they crowed.

Sure, argue all you want that, if not “consequential,” it’s better than nothing. The better argument? It’s not even a Band Aid on the gaping hole the law leaves. Like no federal ban on assault weapons.

California Democrat Rep. Norma Torres was pretty blunt. The effort is “miserable,” she said, charging that the bill achieves the “bare minimum.”

“We should be embarrassed,” the congresswoman said.

She’s right. Much was made about the bipartisan cooperation it took to get the bill passed. Bipartisan? The legislation passed in the House 234-193 – 14 of the ayes Republican. It passed the Senate 65-33 – 15 of ayes Republicans.

So 226 of our nation’s leaders, our own Congresswoman Nicole Malliotakis among them, agreed with the National Rifle Association when they voted no.

“This legislation can be abused to restrict lawful gun purchases, infringe upon the rights of law-abiding Americans, and use federal dollars to fund gun control measures being adopted by state and local politicians,” the NRA said.

It might be impossible to know where Americans stand on gun control. After a tragedy like 19 children killed in Uvalde, Texas, there’s almost a universal cry: Do something! Yet, while some polls indicate a majority want stricter laws; others find support under 50 percent.

It’s a good guess those 226 nays know which way the wind is blowing.

What we do know: There is at least one gun in more than 40% of the homes in America. And they’re the ones we know about.

The other thing we know is that assault weapons are used in mass killings. I don’t know anything about hunting, but I’d be surprised to find hunters toting AR-15s through the woods.

A 10-year nationwide assault weapons ban was passed in 1994. It expired in 2004 and every effort to renew it has failed. To all those who say the Constitution guarantees the right to bear arms in 2022, including assault weapons, I say:

What war are you fighting? Sadly, I know the answer:

Oh by the way: I get a sinking feeling every time I hear of a mass shooting and then follow the relentless news coverage for days, exploring every aspect of the shooter’s life. Most journalists won’t agree, but I believe media unwittingly plays a part in encouraging the next mentally ill person on the edge to seek the same kind of “fame.” Of course, I get why news organizations devote the coverage they do. But on a local level, our policy at the Advance was not to report bomb scares, for example, because the clown who called it in would bask in seeing the chaos he created. Nor do we report on suicides unless they are committed in a public place like the Verrazzano-Narrows Bridge. After every suicide we did report, usually off a bridge, Dr. Ken Popler, then president of Staten Island Mental Health, would reach out and strongly suggest we change even that public policy because it could encourage the next one. It gave me pause every time we reported the suicide, and every time he called. So with that I mind, I did not use the name of the Highland Park shooter. In all likelihood, you don’t know him. Really – what’s the point, beyond giving him even a little more notoriety in our community?