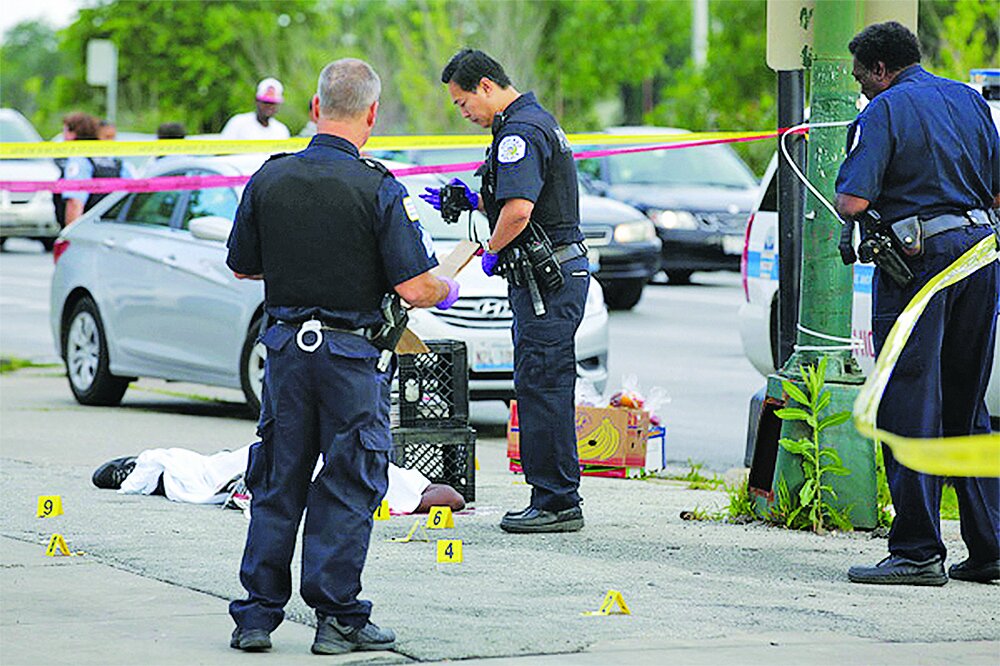 At least six people have been killed and dozens more injured after a gunman went on a shooting spree in Chicago, Illinois. The horror has sent shockwaves across the country and comes as a major setback for Congress which passed what was labeled as a “landmark” bipartisan gun reform bill, the biggest in “30 years.”

The shooter, who targeted a Fourth of July parade, in Highland Park, which is a suburban Chicago town, was on the run after eventually being detained. Police say they have identified the suspect as Robert E Crimo, a white male aged 22.

The man, who was identified as a person of interest hours after the shooting incident ended was described by police as possibly “armed and dangerous” but officers declined to provide details as to why they believe the detained individual was behind the attack.

Officials say the attacker launched the assault while standing on the roof of a building and used what a police spokesman said was a “high-powered rifle” to aim and fire on hundreds of civilians down below attending the parade. The assault weapon has been recovered from the scene of the massacre.

Following the tragic loss of lives, the visible presence of military vehicles and security forces in military gear patrolling the streets of Highland Park depicted a scene similar to a war zone.

The shooting quickly triggered debate about gun control during a tense time in the U.S. regarding the issue and whether stricter measures can even prevent mass shootings from happening in the future.

There have been many reactions but critics say the “landmark gun reform” bill recently passed by the senate and house; described as the most sweeping legislation in nearly 30 years (designed to prevent precisely the nature of this latest gun attack) has clearly not worked in Highland Park.

The bipartisan passed legislation was celebrated as a major breakthrough with the Biden White House saying it was intended to keep dangerous individuals from obtaining weapons. Gun reform advocates say it doesn’t go far enough as evidenced in Highland Park which will go down in the history books for the young white attacker’s reported fascination with guns.

Could this have been prevented? How did the gunmen get hold of such a lethal weapon? Should he have had possession of it? It’s the same debates and questions among Americans that U.S. leaders don’t have the ability to address or tackle successfully.

Many Americans have been raised in a culture of violence and gun violence in particular. The gun culture comes in different forms, with experts pointing the finger at both domestic issues and foreign policies.

The country has been built on gun violence and the vast military adventurism around the globe. The fear is that over the decades, officials and politicians appear powerless to avoid the rising civilian fatalities from the firearms epidemic.

Observers have highlighted the younger generation carrying out more mass killings and argue they are surrounded by a gun violent society that dominates the news and more recently social media. Racism plays a role too as was evident in the Buffalo mass shooting in a black neighborhood. The country is also flooded with weapons. Research shows there are more firearms than citizens and that doesn’t include guns on the black market.

Video capturing the moment of the Highland Park attack shows people fleeing for their lives as gunshots are heard nearby. One hospital said it was treating 26 victims while another said five had been transported to it’s vicinity “the vast majority suffered gunshot wounds,” a hospital spokesman said. Medics have reported minors among the injured. At least one child is said to be in critical condition.

Witness Amarani Garcia, who attended the parade with her young daughter, told local media how she heard gunfire, then a pause for what she suspected was the gunman reloading, followed by firing again. She also spoke of “people screaming and running. It was just really traumatizing, i was very terrified. I hid with my daughter actually in a little store. It just makes me feel like we’re not safe anymore” Garcia said.

Other witnesses spoke of similar graphic scenes and how they initially thought the gunshots were part of the parade before seeing people screaming with blood visible on their bodies.

The gun reform group, Mom’s Demand, put out a statement reading “a white teen or young man had a rifle and was in a ‘sniper position’ on a rooftop as he picked off people below at the Highland Park parade. This isn’t freedom; it’s terrorism.”

The gun-control advocacy organization Giffords Courage said “This is not normal. We should be able to live free of the fear of being shot.”

Shortly before the latest massacre, the National Rifle Association, a powerful gun lobby group which advocates for Americans to carry weapons; shared a message on social media saying “the only reason you’re celebrating Independence Day is because citizens were armed.” But Americans are not “celebrating” a national holiday, instead, they are in mourning.

The mayor of Highland Park, Nancy Rotering, says “our community was terrorized by an act of violence that has shaken us to our core… on a day that we came together to celebrate community and freedom, we are instead mourning the tragic loss of life and struggling with the terror that was brought up on us.”

This is the latest in a spate of mass murders that have recently included the heartbreaking shooting at an elementary school that killed 19 school kids and two teachers. That came shortly after a white supremacist conducted the racist massacre of Black shoppers at a super market in Buffalo, New York which killed ten people. Both of the deadly attacks occurred in May this year.

And this is the third major mass shooting since May. Here is a list of notable shootings in the U.S. during the months of May and June this year that made the headlines and offers a glimpse of the domestic safety and security issues facing Americans. Nowhere else in the world has there been so many shootings in the span of two months. Americans celebrate “Independence Day” but are they actually free? Are minority groups free?

Vestavia Hills, Alabama: At least two people killed and another hospitalized on 16 June after a shooting at a Church.

Duncanville, Texas: Police shot and killed a man who fired gunshots on 13 June at a Dallas-area gymnasium with at least 150 children inside.

Chattanooga, Tennessee: Three people killed and 14 people injured in a shooting on 5 June in front of a restaurant.

Philadelphia, Pennsylvania: Three people killed, and eleven others injured on 4 June during a melee that was followed by gunfire.

Dayton, Ohio: An incarcerated person being treated at a hospital shot and killed a security guard on 1 June, pointed the weapon at others and killed himself.

Uvalde, Texas: an 18-year-old gunman killed 19 children and two adults at Robb elementary school on 24 May in the deadliest school shooting in nearly a decade. More than 15 other people were wounded.

Chicago, Illinois: A shooting killed two people and injured seven others on 19 May.

Laguna Woods, California: One person killed, and five injured on 15 May after a man opened fire on Taiwanese parishioners in southern California.

Buffalo, New York: A white gunman opened fire on 14 May at a supermarket in a predominantly Black neighborhood, killing ten people and injuring others.