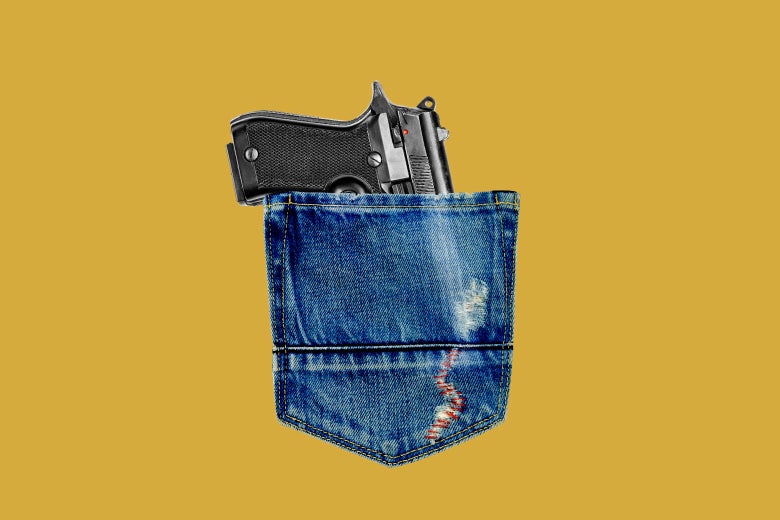 New York Mayor Eric Adams—who as a candidate told a podcast he would personally pack heat while in office—said at a press conference that the SCOTUS decision “made every single one of us less safe” and vowed that “we cannot let New York become the Wild West.” California Gov. Gavin Newsom said the ruling was “a dark day in America.” Left-leaning pundits were similarly aghast: Ryan Cooper of the American Prospect invoked as a grim portent a recent shootout on Philadelphia’s crowded South Street nightlife corridor involving two licensed concealed carriers.

But these sorts of reactions actually miss the real danger posed by the ruling. While some research suggests that more permissive laws on carrying guns in public lead to more violence, the mechanism is subtler than a rise in shootouts as people take their safety into their own hands. In fact, even in places that have had laws on the books enshrining a right to carry, defensive gun use remains very rare. Instead, these laws foster a proliferation of guns that then get lost or stolen, supplying a black market. So-called good guys with guns almost never have cause to actually use their weapons, and so they get careless, inadvertently supplying the “bad guys.”

The most important political nonsense of the week, delivered to your inbox every Saturday.

In other words, the court’s ruling could lead to more violence, but not because licensed gun owners are about to turn Broadway into the O.K. Corral.

The court’s decision in New York State Rifle & Pistol Association v. Bruen is unquestionably radical. While making it easier to challenge future gun control legislation, the justices for the first time established a constitutional right to defend yourself with a firearm in public, throwing out long-standing laws in some of the country’s most populous states—including New York and California—that required gun owners to demonstrate a compelling need, such as work in a field that required carrying lots of cash or being the target of threats, before getting a concealed carry permit.

These sorts of statutes were known as “may issue” laws because authorities retained discretion over whether to approve permits for carrying weapons in public. In contrast, many states have “shall issue” laws on the books, which dictate that anyone who meets basic criteria can automatically get a permit. (Permitless carry states take the most extreme approach and do not regulate the practice at all.)

But while the ruling may be radical as a constitutional matter, the reality is that most of the country already lives under the sort of “shall issue” legal regime the Supreme Court is now imposing, and public defensive gun uses—or DGUs, as experts call them—remain very rare. Licensed gun owners simply don’t open fire in public very often.

That’s not to say it never happens. Getting a sense of the scale of the phenomenon is fraught, however. Estimates range from an astounding 2.5 million defensive gun uses annually, according to a heavily criticized but oft-cited early 1990s survey by criminologists Gary Kleck and Marc Gertz, down to a mere 70,040, according to more recent survey data from the Bureau of Justice Statistics’ National Crime Victimization Survey.

However many DGUs actually occur every year, it seems clear few gun owners use their weapons to protect themselves in public. A 2021 survey by Georgetown professor William English that estimated a relatively high number of DGUs still found that nearly 80 percent of these incidents occurred within the gun owner’s home or on their property, while only 9 percent happened in public. Meanwhile, the National Firearms Survey conducted in 2015 by scholars at Northeastern and Harvard found that only 6 percent of the minority of gun owners who carry a handgun in public had themselves actually been threatened with a gun—the sort of thing that would in theory cause them to draw their own.

Strikingly, DGUs don’t even seem to have increased as states have loosened their laws around public carry. According to forthcoming research by Stanford Law School professor John Donohue—which was included in an amicus brief supporting New York law in Bruen—while the fraction of Americans living in states with “shall issue” or permitless carry laws has risen from under 30 percent in 1992 to over 60 percent in 2011, the share of crime victims who report defending themselves with a gun has remained a steady 0.9 percent through that entire period.

In some ways, these numbers are comforting; they suggest that licensed gun owners aren’t much of menace. On the other hand, they point to the absurdity of the entire ideology built around concealed carry, which promotes a caricature of criminality where responsible “good guys with guns” need to defend themselves from “bad guys” lying in wait to prey on sheeplike unarmed strangers. But that’s not what most gun crime actually looks like. More often, shootings are the results of escalating interpersonal disputes in places where many people are already armed. In the cases of the mass shootings that the NRA argues would be mitigated by concealed carriers, most look like the recent July 4 massacre in Highland Park, Illinois, where a gunman armed with a rifle far more powerful than anything a concealed carrier might pack committed the crime faster than most people can react. A typical legal concealed carrier is preparing to respond to a threat that most likely doesn’t actually exist or far outmatches even trained police officers.

What’s more, while there is disagreement among experts on the issue, some of the most high-quality recent research has found that tighter gun laws, including tighter standards for concealed carry, are associated with lower levels of gun homicide compared with looser gun regulations. It’s just that the role concealed carrying itself plays in this dynamic has long been unclear, considering that few people who go armed in public actually use their weapons as they expect to.

Studies of violent or criminal behavior by concealed carry permit holders are thin. States like North Carolina revoke thousands of the licenses every year, but according to an analysis by the New York Times, the vast majority of revocations are for offenses like drunk driving rather than acts of violence. A study comparing the criminal records of Texas concealed carry licensees (back when the state actually required a license to carry) found that while permit holders were generally much less likely to be convicted of crimes than were nonholders, those who carry and commit crimes are disproportionately likely to have engaged in very serious offenses like sex crimes or an offense involving a weapon.

What seems more important is that states with more permissive gun laws also have more guns, period, and vice versa. Prior to the Supreme Court’s ruling, only nine states had discretionary “may issue” licensing laws: California, Connecticut, Delaware, Hawaii, Maryland, Massachusetts, New Jersey, New York, and Rhode Island. These states also accounted for nine out of the bottom 10 states for rates of gun ownership, and generally had low homicide rates. The states with the highest homicide rates, meanwhile, typically have loose gun laws and high levels of gun ownership. These are deep-seated cultural practices that stretch back centuries and can’t be totally explained by regulations. But loosening the rules around carrying encourages a further proliferation of firearms, which can then fall into the wrong hands.

Indeed, according to a new National Bureau of Economic Research working paper by Donohue along with colleagues at Stanford Law School and Duke University, laws that cement a right to carry guns in public have massive unintended consequences: More guns in public means more lost and stolen guns, which supply a criminal black market, and laws enshrining the right to carry weapons sap the ability of police to actually investigate gun crimes. Right to carry laws are associated with a stunning 35 percent increase in gun thefts, a 13 percent decline in violent crime clearance rates, and as a result, a 29 percent increase in firearm crime, especially robberies. Ostensibly law-abiding gun owners, like those who would automatically get the right to carry a gun in public in a post-Bruen world, can make America a more violent place even if they aren’t actually acting out Bernard Goetz fantasies.

Ultimately, the research suggests that neither pro-gun advocates who champion “good guys with guns” as the solution to crime nor anti-gun liberals who fear more concealed carriers will whip out their Glocks really have an accurate picture of how legal guns create harm. “The public has been too focused on the simple narrative of the good guy with a gun,” said Donohue. “One side likes that and the other thinks, ‘Do we really want someone pulling out a gun?’ They’re focused narrowly on the guy with the permit. What I’m saying with this paper is, let’s broaden the aperture a bit. That’s just a small part of the consequence of these laws.”

Looked at a certain way, Donahue’s findings might offer some hope for New Yorkers and Californians who are now worried for their safety. The Supreme Court may be able to undo historically long-standing gun restrictions like New York’s “may issue” concealed carry laws. But far-right justices can’t induce a cultural sea change around guns in places where the idea of carrying a concealed weapon remains very fringe—and that, in turn, might mean these states won’t see a flood of new weapons entering into circulation. Even among New Yorkers who favor the ruling, there is strong doubt that the court has just opened the floodgates of public carry, as one Queens shooting range owner told the local NPR affiliate. Indeed, 72 percent of New York gun owners told pollsters that they actually hoped the Supreme Court would uphold the “may issue” law. Hopefully, the state is not about to become Texas on the Hudson.