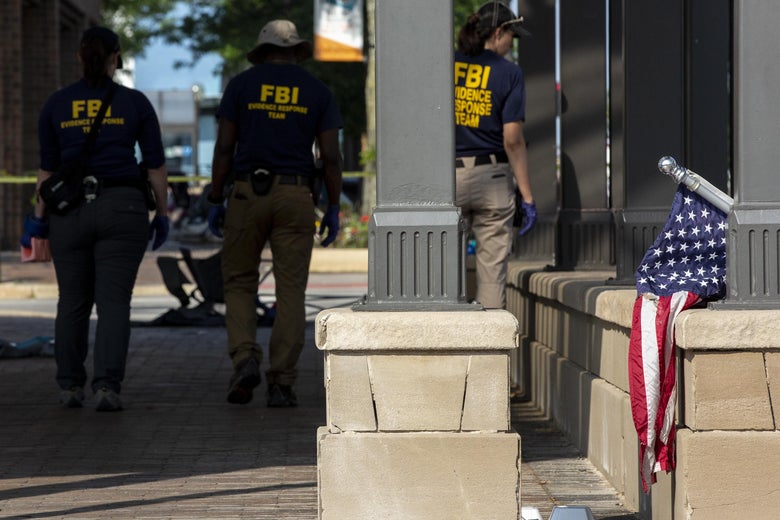 You could not ask for a sadder display of how America’s gun culture has begun to whittle away our other freedoms than the attack on the Fourth of July celebration in Highland Park, Illinois.

A 21-year-old man with an assault rifle opened fire on the parade, killing seven spectators and orphaning a 2-year-old boy. Three dozen people were injured, hundreds are in mourning, and thousands will never celebrate Independence Day the same way again.

While Highland Park captured the most media attention, all in all, 220 Americans were shot and killed over the holiday weekend. That doesn’t include five people who survived being shot during the fireworks after an Oakland A’s game—hit by stray, apparently celebratory bullets from a high-powered rifle fired outside the ballpark. Or two police officers shot—again perhaps by accident—at the Fourth of July fireworks display in Philadelphia. In a grim, resigned statement that seemed to sum up the bloody holiday, Mayor Jim Kenney said, “We live in America, and we have the Second Amendment, and we have the Supreme Court of the United States telling everybody they can carry a gun wherever they want. This is what we have to live with.”

It feels like an inflection point in the balance between the right to bear arms and the right to, well, do just about anything else. The triumph of guns is throttling American public life, chipping away at our experience of school, shopping, protest, celebration, debate, electoral politics, and even the writing of laws.

You’d be hard-pressed to find an institution in this country that isn’t buckling under the weight of a gun fetish that has seen domestic firearms production triple since 2000 and a steady rise in mass shootings, as right-wing courts and state legislatures repeal rules and politicians and gunmakers stoke fears of tyranny and civil war. America now has more guns than people, according to one estimate.

For some people, the growing presence of guns in American community spaces represents the very essence of freedom. For many of us, though, they’re an assault on the social contract, a threat that undermines our freedom and confidence to go about our lives long before anyone pulls the trigger. The ubiquity of guns, and the we way contort ourselves and our institutions to accommodate it, is debilitating enough.

The most important political nonsense of the week, delivered to your inbox every Saturday.

Highland Park, as it happens, is a place that embraced the idea that the freedom from guns was worth fighting for. The city banned assault weapons and high-capacity magazines a decade ago. A gun-loving resident sued; the law was affirmed in the 7th Circuit, in part on the grounds that just making people feel safer was a “substantial benefit”—even if a semi-automatic rifle could still be acquired or owned in neighboring towns, as it eventually was by the man who opened fire on Monday.

When the Supreme Court decided not to hear the Highland Park case, in 2015, Clarence Thomas dissented, writing: “If a broad ban on firearms can be upheld based on conjecture that the public might feel safer (while being no safer at all), then the Second Amendment guarantees nothing.” It’s an argument you hear from open-carry activists too: “My Rights … Don’t End Where Your Fear Begins.”

Thomas may call it conjecture, but the idea that the display of weapons is menacing, antisocial behavior that degrades public life, regardless of whether anyone gets hurt, is a very old one. In a paper last year cataloging the “many nonphysical but very significant social harms that guns can inflict,” the law professors Joseph Blocher and Reva B. Siegel note that armed riders were banned from market and fairs back in 14th-century England. Most U.S. states adopted laws against “brandishing” in the 19th century, and in 1874, the Georgia Supreme Court, in a typical piece of reasoning about the limited scope of the Second Amendment, wrote, “The practice of carrying arms at courts, elections and places of worship, etc., is a thing so improper in itself, so shocking to all sense of propriety” that the Framers could never have intended it.

Many conservatives share this view. In 2014, when open-carry activists started going to Chipotle dressed for Fallujah, the NRA released (and subsequently retracted) a statement that categorized their behavior as “downright weird,” showing “a lack of consideration and manners.” When armed men took over the Michigan State Capitol in 2020, many Republicans condemned the obvious effort to intimidate lawmakers with a show of force.

The Republican Party has a love-hate relationship with these cosplay soldiers. On the one hand, plenty of Republicans are scared shitless: “Both parties have extremists,” a GOP lawmaker told Politico after the Jan. 6 attack on Congress. “There’s a difference in our crazy people and their crazy people. Our crazy people have an excessive amount of arms. They have gun safes. They have grenades. They believe in the Second Amendment. They come here and Trump’s made them think this is the Alamo.” House Minority Leader Kevin McCarthy reportedly warned members of Congress not to verbally attack one another over their upcoming impeachment votes for fear of endangering their lives (presumably at the hands of armed Trump supporters).

On the other hand, the GOP recognizes that the style of militarized peacocking that has become commonplace over the past 10 years is a privilege that belongs only to their side and they are prepared to take advantage. The guns don’t need to be fired to do their work: The Michigan Legislature did scuttle its pandemic order in front of its heavily armed audience, and it did cancel a subsequent meeting, and it did defer debate on guns in the statehouse (until after Jan. 6, 2021, when the Legislature finally took action).

Or at least—it works for them. For others, it’s not even an option. During the Black Lives Matter protests in 2020, the Louisiana Republican Congressman Clay Higgins said the quiet part loud, posting a photo of armed Black men on his Facebook page and writing, “If this shows up, we’ll consider the armed presence a real threat. … I wouldn’t even spill my beer. I’d drop any 10 of you where you stand.”

This form of white privilege is in part a function of the police, who seem unsure how to handle the rise of the primarily white men who now carry big guns everywhere. In Oklahoma last month, a man in a tactical vest carrying a semi-automatic rifle scared everyone he saw: Government employees locked the doors to their building. Target shoppers called 911 from the parking lot, and AT&T employees fled the store when he entered. What got the man in trouble with the police, finally, was his brass knuckles—those are illegal in Oklahoma. Whether out of fear or sympathy, police seem incapable of restraining armed, right-wing demonstrators. Philando Castile got no such respect.

With lawmakers and police out to lunch, the responsibility for setting limits on guns in public places has fallen to managers, architects, and security guards, who have worked to “harden” buildings as if the country were in a perpetual state of war. This trend predates the mass shooting surge by a few years, but it has proceeded apace as metal detectors proliferate at stadiums, concert halls, schools, and government buildings.

These actions undermine civic life by limiting open access to important spaces, such as the areas around the White House, the U.S. Capitol, and the Supreme Court. They also change our understanding of what it means to participate in American life. How else to categorize the ghastly practice of active shooter drills in schools? Or what the Washington Post architecture critic Phillip Kennicott called the “repeated, humiliating and demeaning encounters” with security personnel that are required to enter every public building? As Hannah Lebovits wrote of synagogue security in the wake of the Tree of Life shooting in Pittsburgh and the Congregation Beth Israel hostage crisis near Fort Worth, Texas, “The hyper securitization mindset of the last three years has also created a gated-ness within our minds and our community.”

Last year, I wrote about an experiment to build out a new gathering space in Chicago’s Chatham neighborhood, a series of curbside patios called the “boardwalk.” Built from the plywood that covered storefront windows during the George Floyd protests, the boardwalk was a neat symbol of the neighborhood and the city’s emergence from the struggle of the spring of 2020. This local hangout won awards and positive attention for the South Side. One weekend in 2021, the installation drew a boisterous but peaceful late-night street party. Two weeks later, when revelers returned, somebody opened fire, wounding nine and killing a 29-year-old mother. Not long afterward, the boardwalk was disassembled.

Not everything we do can be hardened. The list of events that have been disrupted by armed demonstrators—or canceled in the expectation of their arrival—is long and getting longer. You can’t make sure there’s only one door to a parade.