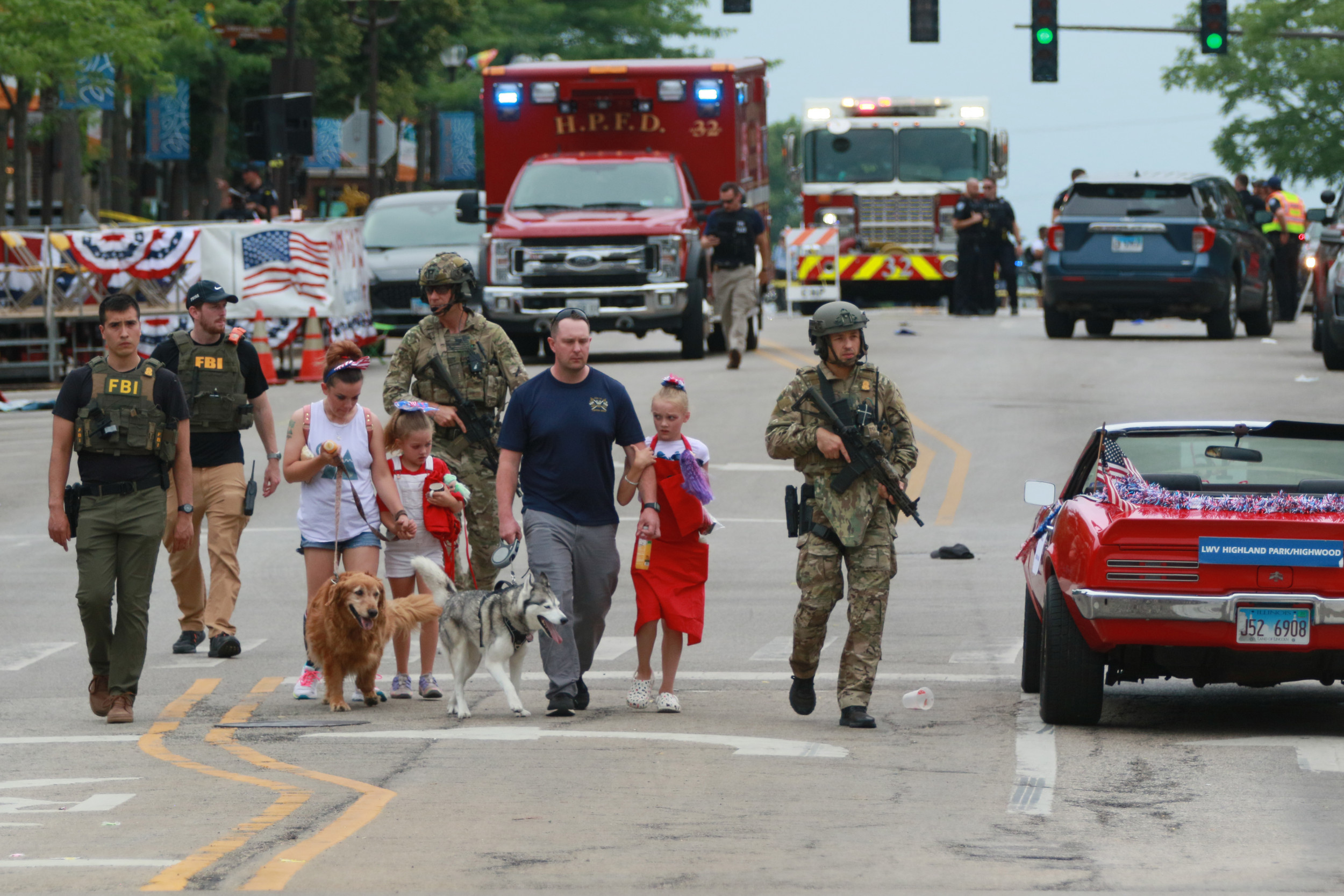 Not long before a shooting left at least six dead at a July Fourth parade, the National Rifle Association (NRA) sent out a tweet.

“Happy 4th of July, America!” it said. “We are a country because of brave souls with guns who valued and fought for liberty and freedom.”

But celebrations across the country were marred as the nation mourned yet another mass shooting.

The parade in Highland Park, Illinois, began around 10 a.m. but was suddenly halted when shots were fired minutes later.

Dozens of people were wounded after a gunman opened fire from a rooftop, police said. A person of interest was taken into custody on Monday evening.

It wasn’t the only July Fourth celebration in the country rocked by gun violence—two police officers were wounded after gunfire erupted during a fireworks display in Philadelphia on Monday night, ending in hundreds of people fleeing for safety. Other events had people fleeing fireworks viewing points over fears of an active shooter.

Many responded to the NRA’s July Fourth tweet with criticism.

“This is 4h of July in America, because of the NRA,” Fred Guttenberg—whose teenage daughter was killed in the 2018 Parkland school shooting in Florida—wrote, alongside a screenshot from a CNN article reporting Highland Park’s mayor urging residents to remain indoors as the gunman remained at large.

“Such fascist BS,” Pulitzer Prize-winning writer Douglas Blackmon wrote. “@NRA exists solely to help gun makers profit & line the pockets of its leadership. It doesn’t care for 1 second that it is helping terrorists of every kind, ISIS, wife-killers, criminal gangs, & those who slaughter children. It is a filthy cult of greed & death.”

Pete Souza, former President Barack Obama‘s White House photographer, said: “We are a country with assault weapons that shoot and kill innocent Americans from a rooftop. Thanks to your organization.”

The NRA did not respond directly to the criticism on Twitter, but later retweeted a post from Ryan Fournier, the co-founder of Students for Trump.

“The @NRA is once again the only organization in America that gets blamed for crimes their members never commit,” Fournier wrote.

Meanwhile, Rep. Eric Swalwell (D-CA) told his followers to “stop blaming the NRA for mass shootings” because it shields Republican lawmakers from accountability.

“The NRA may fund candidates but the NRA does not have a vote in Congress. *ELECTED* Republican members of Congress do. And they are keep voting against our kids and voting for their killers,” Swalwell wrote on Twitter.

“Blaming the NRA shields those who actually have a vote. It also kind of suggests that ‘but for’ the NRA these Republicans would do the right thing. Why give them that alibi? Let’s start naming names. And the NRA is not a name. The NRA is not on the ballot this November.

“But hundreds of Republicans who choose killers over our kids are on the ballot. Blame them. Choose our kids. Not their killers.”

Newsweek has contacted the NRA and Rep. Swalwell’s office for further comment.