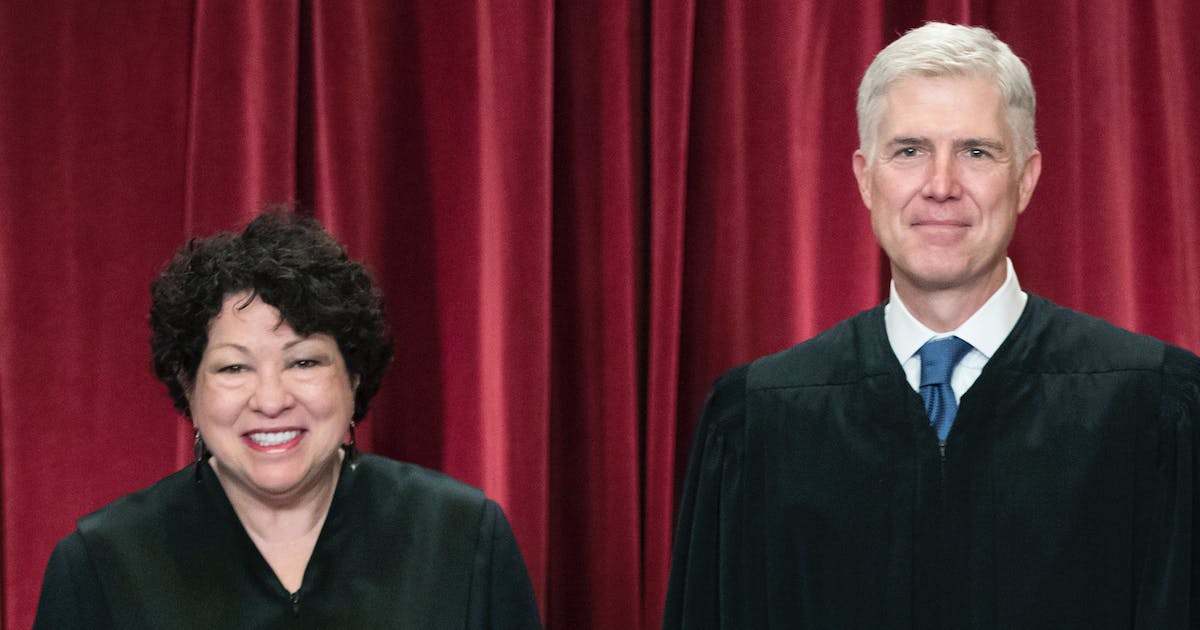 A June 29 letter writer (“Court starts the ball rolling”) sets up a number of far-fetched straw men/women to knock down in an overreaction to the recent U.S. Supreme Court religion decision (“Court backs coach’s prayer on field,” June 28).

Justice Neil Gorsuch has it correct — that the First Amendment was not intended to suppress religious voices in the public sector, but that this practice has indeed become an operative model in recent years that needed addressing. You can “limit” it to the public school situation, but my experience is that to speak up overtly on the basis of one’s faith in the public square has become pretty much verboten in our culture across the board. As if to speak of God and biblical principles as a basis to be considered in making a decision somehow violates the separation of church and state in any setting.

Freedom of the press and freedom of religion are linked in the First Amendment because they’re both about the free intercourse of ideas in the public marketplace. Religious viewpoints — of whatever flavor — have a distinct place in the public conversation because overall they bring a well-thought-out set of ethical/moral principles — often inconvenient principles — to the conversation.

Does every “religious” person articulate these well, or use them well, instead of as a cover for other biases? Of course not. But the issues raised are often important, and often inconvenient. We on the “liberal” side of the faith were certainly inconvenient for those on the other side of the civil-rights arguments in the 1960s. And some on the right today raise inconvenient questions about a number of moral issues that people don’t like to be reminded of either. Does either side get to embody those values in the “state?” In a democracy, only at the ballot box.

A person — a leader? a teacher? — expressing their faith in public may feel awkward. But I hardly think that it’s going to “indoctrinate” anyone.

Then again, God does seem to reach out to people in lots of odds ways. Perhaps it’s why C.S. Lewis once commented that a budding atheist needs to be careful — because God is very unscrupulous.

The writer is a retired Episcopal priest.

Growing up in south Minneapolis in the 1960s, I was always the lone Jewish child in class. Many of my friends pitied me because I was headed to hell due to my non-Christian status. I still remember the sting of having my sixth-grade teacher chastise the class when he thought we were not acting like good Christian children. This was a time when singing religious Christmas carols was a strong part of the curriculum. It was not taken lightly when I opted out. In fact, that same teacher played carols in the room I was sent to so that I would “not miss out.”

Somehow I believe that if players avoid prayers by coaches they will experience consequences of one degree or another.

What is courage? It is to do what one thinks is right. Cassidy Hutchinson exhibited courage during Tuesday’s hearing by the committee investigating the Jan. 6, 2021, attack on the U.S. Capitol. I had never heard of her, and now I will never forget her. Her insight was so fresh, and she filled in so many gaps, and now she has become one of the most remarkable witnesses in the hearings.

She is an inspiring person to all who seek the truth. Then to learn that she is just in her mid-20s — so poised, beautiful, articulate, genuine, humble and truthful — and that she held a key position in the While House as an aide to Mark Meadows, accompanying him to all his meetings, even Air Force One events, and so was often in contact with President Donald Trump.

Hutchinson was in a good position behind the scenes to observe so many issues that Trump and his advisers have denied. We learned that Trump played an active role in planning not only the Ellipse rally but the march to the Capitol. At the Ellipse rally, Hutchinson was in a tent behind the podium, was well-aware of discussions there, and learned that the caravan she was a part of after the rally would go directly to the West Wing and not the Capitol, as Trump wanted, for safety reasons. They were informed that people in the crowd were armed. Trump still insisted, and when they left for the White House, she testified, he grabbed the steering wheel of his vehicle, trying to force the driver to turn back.

She mentioned a number of times how Trump’s advisers and staff feared his temper, and one incident stood out. She testified that she had been told by a dining room valet that Trump had become angry at something that was said and had thrown a plate of food against the wall. She said she helped clean it up.

Listening to her, I was so aware of a cloud of fear that hung over the White House. It took courage for Hutchinson to reveal many things that were going on behind the scenes. I pray for her safety and thank her for her poignant and truthful testimony.

In recent news reporting, the focus has been on the incendiary former president. The wrong place. What is more shocking is the 74 million people who voted for Trump in 2020, a large proportion of whom will support him even more strongly as his mean-spirited personality explodes.

The target of our interest must be in our fellow citizens and not the former president. Too many marvel at Trump’s character. Many of the 84 million nonvoters would not support Trump, and we need to encourage them to vote. I wouldn’t have him home to dinner, and, more important, I would not have home to dinner those who invaded our Capitol. Get out the vote!

I read the reasons that a Denver suburbanite gave for his decision to change his registration from Democratic to Republican (“Some in suburbs flip to GOP,” June 28).

He’s concerned about Democratic support for mandatory COVID-19 vaccines. Which result in fewer infections and deaths. Does the effectiveness of all the other mandatory vaccines, like the polio vaccine, not sway him?

He’s concerned about the party’s “inability to quell violent crime.” So he registers with the party that is in the hip pocket of the National Rifle Association and opposes virtually every effort at gun safety legislation. And whose Supreme Court seems hellbent on invalidating what little regulation there is. Does he not see the connection between 400 million guns and violent crime?

Finally, he’s concerned with the Democrats’ “frequent focus on racial justice.” Well, God forbid we think about racial justice. It’s not like we stole the country from the Indigenous people using a series of broken treaties and violence, built its wealth on enslaved Black people, and have a Constitution that allowed enslaved people to be imported for 20 years after its adoption and counted enslaved people as three-fifths of a person. Why on earth should we think about racial justice?

I don’t understand why people think there are easy answers to difficult issues. It seems, in the case of Denver suburbanite, that the answers might inconvenience him or make him uncomfortable. But if he thinks that strong public health measures, sensible gun safety legislation and concern with racial justice — showing concern for our neighbors — are a bridge too far, I guess today’s GOP is a better fit.