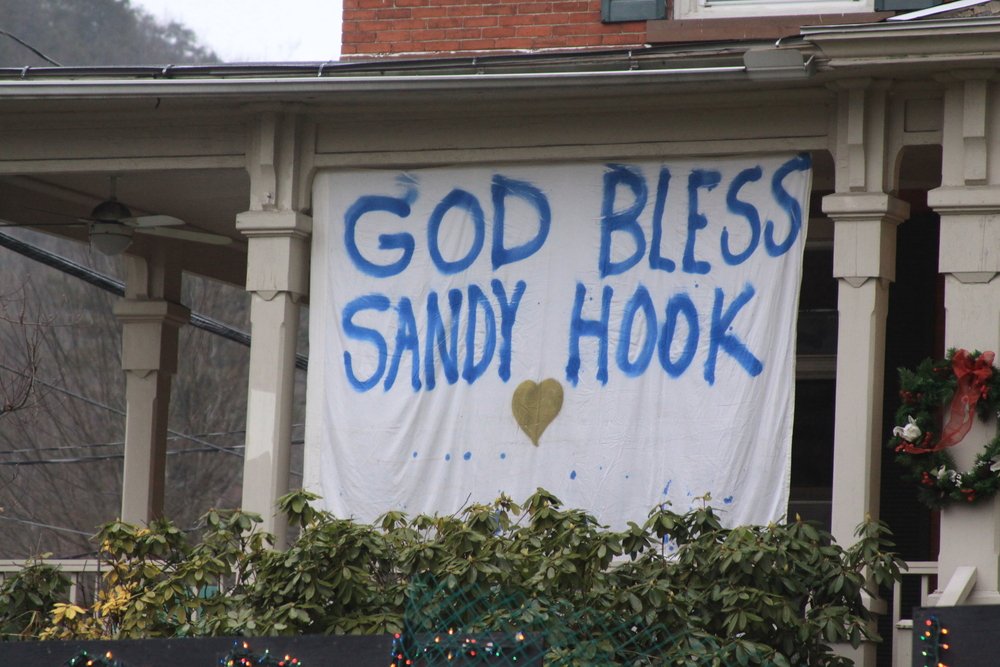 I live in Newtown, Connecticut, with my husband and two young daughters. We moved here from Brooklyn, New York, six years after my nephew survived a massacre at the Sandy Hook Elementary School. I’m often asked what it is like to live in this community, and my response is that this place makes me face the light and shadows left behind by the twenty-six victims of the mass shooting daily.

But the shooting did not just happen in Newtown; it reverberated across the country. Gun violence is a national epidemic, and we have all been so horrifically reminded of that by the shooting in Uvalde, Texas, just weeks ago. Despite the language we often use to depict these kinds of tragedies, what happened in Uvalde wasn’t “unimaginable” or “unfathomable”—but part of a terrifying and predictable pattern.

What happened in Uvalde wasn’t “unimaginable” or “unfathomable”—but part of a terrifying and predictable pattern.

In the weeks leading up to my daughter’s first day of first grade last fall, I was overwhelmed with fear. I decided that the only way to get to the other side of it was to face Newtown’s past and try to understand what it means to live in a country where guns outnumber people. I can’t say I found any definite answers, but I did stumble on something unexpected: hope in an army of women holding their communities together behind the scenes, protecting their children from violence, and fighting for political change.

For many years, Newtown was my home away from home, and I visited often. It was a community that I loved visiting, and, after starting my own family, we spent even more time in Newtown so my girls could grow up with their cousins. Nonetheless, we were city folk, and I never thought we would move here.

Things changed quickly when a loaded gun was found at our local Brooklyn, New York, playground where I spent most mornings with the girls. It was a tipping point for us.

The irony of fleeing the threat of gun violence by relocating to a town that had suffered one of the worst mass shootings in the history of our nation is not lost on me. But, like others lucky enough to have the privilege and resources, I did think I could flee.

On some level, most of us do. We’re certain that we can insulate ourselves by going to greener pastures with cleaner streets, bigger playgrounds, and shinier schools. Newtown had experienced unfathomable violence, but I thought that was history. It wouldn’t really be a part of our lives.

On March 22, 2019, we moved to Newtown. Three days later, Jeremy Richman, the father of one of the Sandy Hook victims, died by suicide at the local Edmond Town Hall. What should have been obvious to me before was now clear: Gun violence is not a story that has a beginning and an end. It is an ongoing, ever-present, non-discriminating part of life in the United States. It cannot be escaped.

Americans love to look at the rest of the world—particularly impoverished conflict zones—from a distance. I studied international law in graduate school and believed I would spend my career prosecuting war criminals from countries without an established rule of law. But the truth is, we are living in a conflict zone, and, for many victims and their families, there is no recourse to justice.

And yet, despite gun violence being a well-documented epidemic in the United States, the well-funded gun lobby has been able to dominate the discourse and shape policy for more than forty years. Even after twenty children were murdered in Sandy Hook, it was only a matter of days before pro-gun advocates took the offensive, with Wayne LaPierre, executive vice president of the NRA, infamously proclaiming that “the only way to stop a bad guy with a gun is with a good guy with a gun.”

Gun advocates called for armed guards to keep school children safe, Republican lawmakers refused to turn their backs on the NRA, and history is now repeating itself in the wake of the Uvalde shooting.

Pro-gun messaging is a vast web of dangerous propaganda that masks a profit-based, anti-regulatory scheme. To begin untangling it, the “good guy with a gun” talking point is an instructive place to start. The myth serves as the scaffolding for the gun lobby’s central premise that more guns means a safer America. But the truth is that the entire conversation rests on the false premise that people fall into two fixed camps—the good or the bad—and those in the “good” camp will never resort to inappropriate violence.

There is almost no other narrative in policy or politics that is so completely and convincingly undermined by facts—and common sense—as this one. Nobody is good all of the time, and most of us are just OK humans. Given the right stressors and opportunities, anyone can commit a bad act. Not just anyone, however, will commit an act of violence with a gun, and this leads us to the second logical flaw—the “guys” part of the good guys/bad guys story.

I don’t know if there is a regulatory policy that can be directed by this data, but at the very least we can put the “good guy with a gun” rhetoric to rest. The only thing that can slow the tide of violence and bodies is stricter gun control, and on that front, women—moms, in particular—are leading the charge.

“Moms are the secret sauce,” gun reform advocate and mother Shannon Watts told me when we spoke in February, “because we multitask, we are committed to incrementalism, we are fierce protectors, and we need to be empowered.”

In 2012, on the day after the Sandy Hook shooting, Watts started a Facebook page calling for action. Living in Ohio at the time with her husband and their five children, she very quickly discovered that not only were there millions of other moms around the country who shared her grief and anger, but that they could be mobilized as a powerful force for change. As a result, Moms Demand Action for Gun Sense in America was born.

When I spoke to Watts, I was struck by just how much the organization and its eight million members have been able to achieve in a relatively short period of time. It has helped to pass background check laws in twenty-one states and Washington, D.C., red flag and safe storage laws in dozens more, unlocked billions of dollars for education and advocacy, and even started a program that helps teach women how to run for elected office.

Women are acting not only as a strategic force, but as an important antidote to the toxic rhetoric of the gun lobby.

Part of what makes this organization so successful is its ability to capitalize on the strengths that moms bring to the table. By structuring the organization in a way that allows members to drop in and out, to contribute what they can when they can (a term Watts dubs “naptivism”), Moms Demand Action and its partner organization, Everytown for Gun Safety, have figured out how to access a previously untapped resource, providing an important edge to the movement against gun violence.

In many ways, women are acting not only as a strategic force, but as an important antidote to the toxic rhetoric of the gun lobby. They are survivors, holding their families together in the aftermath of violence, and they are mothers moved to act by the knowledge that their children aren’t safe. The strength that these women are wielding in the public sphere is a model for the kind of holistic participation in democratic processes that we so desperately need to combat extremism.

Of course, women are not the only people involved in this fight. People of all genders are working together at every level to make our communities safer from gun violence, including the extraordinary work by the fathers of Sandy Hook victims here in Newtown. But right now, we need to think about who has the power to tip the scales, given that, across the political spectrum, an astonishing majority of women support stricter gun control. That power—and responsibility—lies with us.

I still hold my daughter tight after she gets off the bus each day. It is harder now than it has ever been to imagine a nation where mothers aren’t afraid that gun violence will take their children. But I have learned that, if we look to each other, we have the numbers, the political will, the skills, the heart, and the rage to force change.