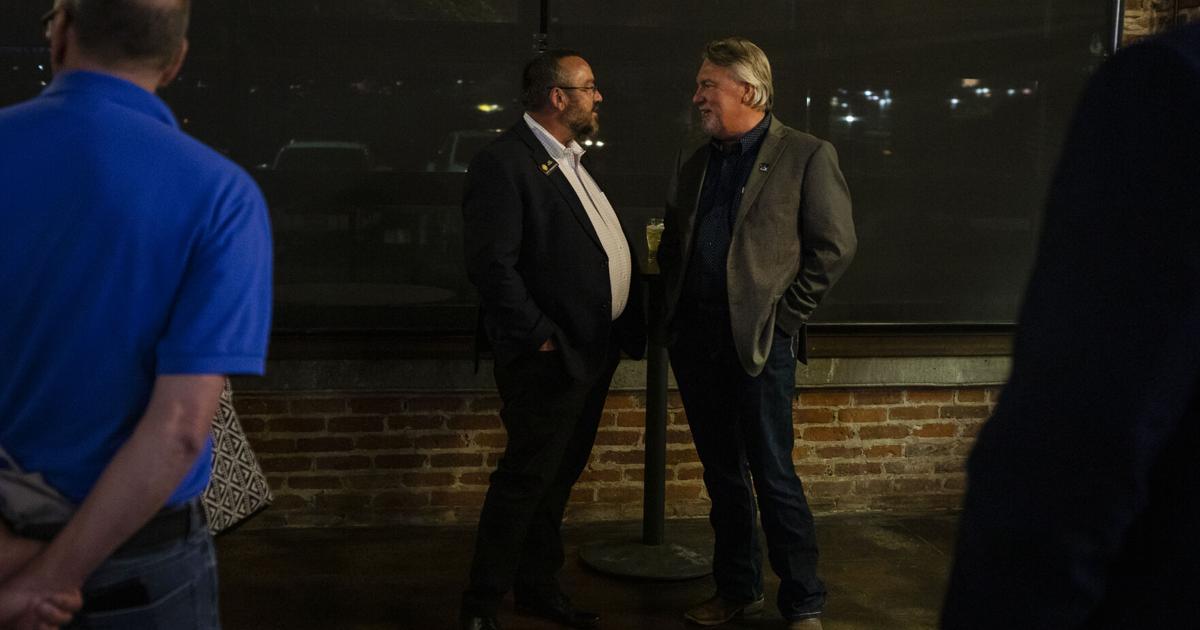 Should the winners of the Republican primaries on Tuesday night go on to win their general election races in November – and it’s a safe bet that most will do so, given their districts’ partisan leaning – the state House could see a less fractured GOP caucus.

The Associated Press called the race for McKean Tuesday evening, with the incumbent holding a 1,500 vote-margin over Hein in early returns.

In addition to McKean’s victory – which likely also means he will continue his leadership role in the party – half a dozen members of the GOP’s caucus more conservative wing aren’t returning for various reasons. Some of them had clashed with McKean over policy and personality in past years.

Indeed, the question of the night became who would replace them.

Hein earlier accused McKean of violating campaign finance laws that the elections division of the Secretary of State dismissed for failing to cite a specific violation.

McKean easily won the money race, as well, with outside groups pouring more than $440,000 into backing McKean, who also outraised Hein $56,000 to $20,000. Hein’s only support from outside groups came from those affiliated with his employer, the National Association for Gun Rights. The groups spent less than $20,000 to back his candidacy.

Hein’s largest contribution was $2,675 from RMGO. He also won financial support from Neville and his brother Joe, and dad Tim Neville, a former state senator.

Newly-appointed Rep. Kurt Huffman is expected to defeat his opponent Robin Webb in the Republican primary for House District 43 in Douglas County, with Huffman leading 61.27% to Webb’s 38.73%. Huffman, an engineer and general contractor, is technically the incumbent of the race after Van Winkle left the seat to fill a Senate vacancy and Huffman was appointed to finish Van Winkle’s term.

Anthony Hartsook is leading the Republican primary for House District 44 in Douglas County, which opened up as Rep. Kim Ransom reached her term limit. Hartsook, a retired Army lieutenant colonel and director of the Future Freedom Foundation, is ahead of his opponent Terry Dodd, a real estate broker and construction manager, with 62.81% and 37.19% of the votes, respectively. Hartsook’s backing included spending from some of the same independent expenditure committees that backed McKean, with Dodd backed by Rocky Mountain Gun Owners (RMGO), a longtime Neville ally.

Douglas County Assessor Lisa Frizell leads educator Bill Jack in the race to replace the term-limited Neville. As of 8 p.m., Frizell held a 15% point lead over Jack. Frizell was backed by the same IECs as Hartsook and McKean, with Jack supported by RMGO.

As of 9 p.m., Rose Pugliese of Colorado Springs, who led the 2020 failed effort to reject the National Popular Voter, holds a 10% point lead over defense contractor Joe Woyte in the race to replace Rep. Shane Sandridge, who chose not to run for re-election.

Rep. Colin Larson, R-Littleton, is leading in the Republican primary for the Jefferson County-based House District 25. Larson’s primary opponent, retired teacher Dede Wagner, is behind 31.51% to his 68.49% in the race to decide who will face Democratic candidate state Sen. Tammy Story, who was drawn out of her Senate seat and ran uncontested in her primary.

Savannah Wolfson is poised to win the Republican primary for House District 26, receiving 61.37% of the votes compared to her competitor Glenn Lowe III’s 38.63%. Wolfson will fight Democratic candidate Meghan Lukens for the seat — including Moffat County, Rio Blanco County and Routt County — which was left open by Rep. Dylan Roberts, who is leaving to run for the state Senate.

Tisha Mauro is ahead her opponent Jason Muñoz in the Democratic primary for House District 46 in Pueblo County. Mauro has received 55.81% of votes, compared to Muñoz’s 44.19%, in the race for the seat left vacant by term-limited Rep. Daneya Esgar. Mauro, who previously unsuccessfully ran for Pueblo County commissioner, will have to battle Republican candidate Jonathan Ambler, whose race was uncontested, for the seat this November.

Cattle rancher Gabe Evans is leading over dairy farmer Terry DeGroot, 70.80% to 29.20%, in the Republican primary race for House District 48 in Adams County and Weld County. Evans is expected to face Democratic candidate Spring Erickson for the seat, which was left open after Rep. Tonya Van Beber left to unsuccessfully run for the state Senate.

Rick Taggart is on track to win the Republican primary race for House District 55 in Mesa County — leading with 53.46% of the vote, compared to his opponent Trish Weber’s 46.54%. Taggart, a member of the Grand Junction City Council, is vying for the Republican-dominated seat being vacated by Rep. Janice Rich, who is running for the state Senate.

On the Democratic side, the only incumbent facing a challenger is Rep. Mandy Lindsay of Aurora, who was appointed to her House District 42 seat last January by a vacancy committee, after Rep. Dominique Jackson resigned to become the regional director of the U.S. Department of Housing and Urban Development. As of 9 p.m., Lindsay has a 15% point lead in a repeat of the January contest with Gail Pough.

One of the hottest open seat contests on the Democratic side has been in House District 34, based in Northglenn, in a contest to replace Rep. Kyle Mullica, who is running for the state Senate. Outside groups poured in more than $325,000 in the race between Jenny Willford and Sam Nizam, and early returns show Willford with a 16% point lead.

Fox News Is Having a Nuclear Meltdown Over the Feds Raiding Mar-a-Lago
Sunday Shoot a Round # 41
White House gears up to promote Biden’s wins during August lull in Washington
‘The Hug’ comes full circle, from infamous to point of pride for Charlie Crist’s new ad
Not a Video 1-7-10