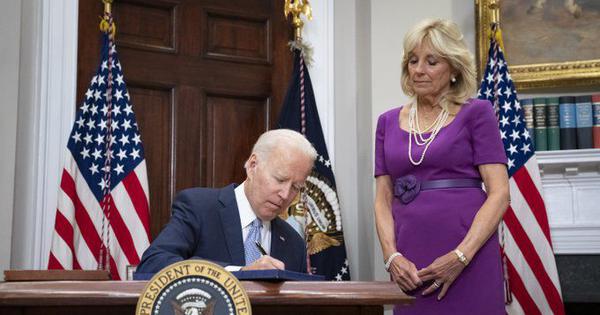 The Senate had passed the law – the Bipartisan Safer Communities Act – on Thursday, and the House of Representatives gave final approval to it on Friday.

The development comes amid a spate of incidents of mass shootings in the country. The United States has seen at least 254 mass shootings so far this year, according to CNN.

Biden on Saturday said that the law that he signed will save lives. “At a time when it seems impossible to get anything done in Washington, bipartisan members of Congress and I did something,” he said. “…While this bill doesn’t do everything I want it to, it does include actions that I’ve long called for that will save lives.

The president’s wife Jill Biden, a teacher, was also present at the signing of the law.

The law puts in place tougher background checks for buyers younger than 21 years and expands restrictions on domestic violence offenders on owning firearms. Biden said that law “finally closes the boyfriend loophole”, referring to a provision that bans all those convicted of domestic abuse from owning firearms. Earlier, the restriction only applied to persons who were married to their victims or lived with them.

The Act also provide incentives to those states which would pass laws that allow guns to be temporarily confiscated from people deemed to be too dangerous to possess them by a judge.

Biden said that legislators in the United States acted for the families that have lost their souls to an “epidemic of gun violence”.

“It’s been 30 years since our country passed meaningful gun safety laws,” he said. “I’ve worked on this issue my entire career. Today, we ended that streak with the signing of the Bipartisan Safer Communities Act. I know the work that lies ahead, and I’ll never give up.”

On the other hand, the National Rifle Association – the country’s most significant pro-gun lobby – said that the law would not stop violence, according to the BBC.

On May 28, former United States President Donald Trump and other Republican leaders had criticised those calling for tightening gun control laws at a convention of the National Rifle Association.

Trump had suggested that schools should have a single entry point with armed guards on vigil, and should have exit-only fire escapes. He had also suggested allowing some teachers to carry firearms.

Efforts to introduce gun control laws had gained momentum after an attack at the Robb Elementary School in Texas’ Uvalde city. The attack was carried out by 18-year-old Salvador Ramos, who was eventually killed by responding officers. Ramos had shot his grandmother before attacking the school.