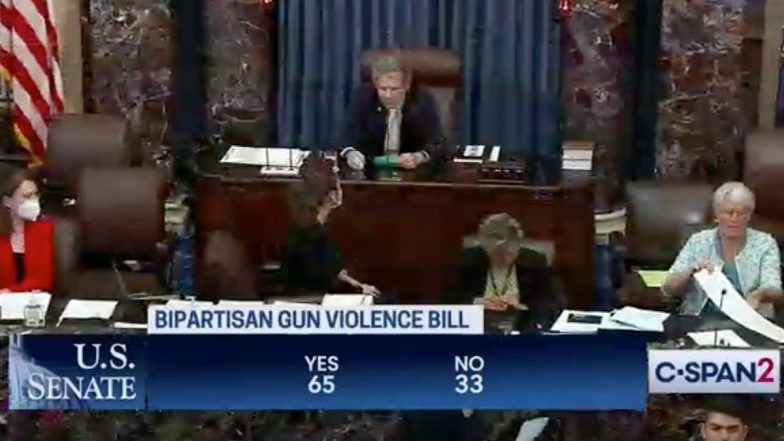 Mumbai, June 24: In what could be termed as a historic development, the United States Senate approved the bipartisan legislation which is aimed at keeping firearms out of the hands of dangerous people.

In order to pass the US Gun Control Bill, the Senate voted 65-33 to approve the gun-safety legislation. The decision by the US Senate is been seen as the lawmakers’ most far-reaching response in decades to the nation’s run of brutal mass shootings.  US Gun Control Bill: Senate Approves Bipartisan Gun Violence Bill, House Passage is Next.

The US Gun Control Bill comes amid the backdrop of the recent mass killings at an elementary school in Uvalde, Texas, and a grocery store in Buffalo, New York, in which a total of 31 people were killed last month. Interestingly, the Bipartisan Safer Communities Act was backed by 50 Democratic senators and 15 Republicans.

The Senate has voted 65-33 to pass the Bipartisan Safer Communities Act — the most sweeping gun bill in decades designed to prevent gun violence.

🚨 Senate votes 65-33 to pass the most significant gun violence prevention bill in decades, marking a victory for the gun-safety movement and a rare defeat for the NRA on the Hill. The bill now goes to the House, which is expected to pass it. President Biden says he will sign it.

The bill aims to enhance background checks for buyers under the age of 21. It will also provide $11 billion in funding for mental health and $2 billion for school safety programmes. More importantly, the US Gun Control Bill will also provide funding to incentivise states in order to implement “red flag” laws to remove firearms from people who are considered a threat.

The bipartisan gun-safety legislation comes the same day after the Supreme Court struck down a New York law that required people to show a special need to carry a handgun in public. The SC in its ruling said that the Second Amendment protects gun rights outside the home. US Senate Passes Gun Control Bill.

While the bill has been passed by the US Senate, it has to now pass in the House of Representatives before President Joe Biden can sign it into law. The apex court also observed that Americans have a right to carry firearms in public for self-defense. Justice Clarence Thomas noted, “Nothing in the Second Amendment’s text draws a home/public distinction with respect to the right to keep and bear arms.”

After the bill was passed by the US Senate, the White House in a statement of support said, “By passing the Bipartisan Safer Communities Act, Congress will be taking meaningful action to save lives.” It further added, “This legislation would be one of the most significant steps Congress has taken to reduce gun violence in decades, giving our law enforcement and prosecutors new tools to prosecute gun traffickers.”

Today’s Supreme Court ruling on guns is deeply troubling as it defies commonsense and the Constitution. Lives are at stake. Congress should pass the bipartisan gun safety proposal immediately and continue to do more to protect our communities.

The US Gun Control Bill also closes the “boyfriend loophole” which is aimed at barring convicted dating partners from buying guns. Hence, the bill blocks sales of guns to those convicted of abusing unmarried intimate partners. What makes the bill much more significant is the fact that for the first time in decades, the proposed reform has received this level of support from both Democrats and Republicans.

“Tonight, the United States Senate is doing something many believed was impossible even a few weeks ago: we are passing the first significant gun safety bill in nearly 30 years,” Senate Democratic majority leader Chuck Schumer said. While the bill was welcomed by many, some still believed that it would help.

For the first time in nearly 30 years, the Senate just passed a bipartisan bill to address gun violence.

This is a historic moment – and a critical step forward in the fight to end the scourge of gun violence once and for all. https://t.co/wj9xgkZbpS

Opposing the bill, the National Rifle Association (NRA) said that the legislation will not stop the violence. It must be noted that the last significant federal gun control legislation was passed in 1994. Back then, the bill banned the manufacture for civilian use of assault rifles and large capacity magazines, however, the expired a decade later.

(The above story first appeared on LatestLY on Jun 24, 2022 11:22 AM IST. For more news and updates on politics, world, sports, entertainment and lifestyle, log on to our website latestly.com).